One of the first consoles I bought for myself (as opposed to getting it for Christmas or my birthday) was an Atari Jaguar. Why? Fuck if I know. I just had to be the kid getting something other than the actual, you know, good systems that were available at the time. I had to be different, and apparently a bit of a dipshit. So I hit up the nickle ads (what Internet? It was 1994) and found a guy selling one with a handful of games for $300. It came with Cannon Fodder, Brutal League Football, Iron Soldier, Super Burnout (a shitty motorcycle game), Val d’lsere Skiing and Snowboarding (wait…what?), Cybermorph and, of course, the crown jewel: Aliens vs. Predator. Jesus Christ, what a fucking horrible lineup of games. Those are all almost universally garbage. I could pick up that whole goddamn package for a five spot and a no-swallow blowjob. What the fuck was Atari thinking? But I digress.

I used to seriously love Aliens vs. Predator. I was never a computer guy, so I only had word processors, not actual computers. I had never played a real first-person shooter before this one, no Doom or Duke Nukem. I remember being awed by the graphical powerhouse I had before me. You could play as any one of the three: space marine, alien or predator. Playing through the space marine stages, a layover map would gradually fill in, and you’d wander over to corners just to make sure the thing filled in all the way, you know? You’d hear the horrible screech of approaching aliens and the spine-tingling, brutal and honestly terrifying whispers of cloaked predators. Let me tell you something, when you’re alone in your first apartment at 3 in the morning clutching a massive Jaguar controller with sweating hands and your motion detector is going beep…beep…beep beep…beep beep beep…and all of the sudden you fucking hear “Anytime…” whispered straight out of the Predator movie directly in front of you, you’re either shitting your pants, or you’re a straight-up robot with no human feelings. The aliens and predator campaigns were equally as cool. You could use all the weapons at their disposal and kill some shit, but good.

So, I recently picked up the new Aliens vs. Predator on my PS3 for $10. See, it was made by the exact same developer, Rebellion, who made the original on the PC and also my beloved Jaguar version. But then, an hour into the space marine campaign, when I slowly realized I was slipping into a coma induced by medical-level boredom, I began to second-guess myself. This new game was just so bland and generic; was I looking at the old one through rose-colored glasses? I thought maybe I was, so I decided to dig up my old Jaguar and give it another play-through and, well, holy shit. 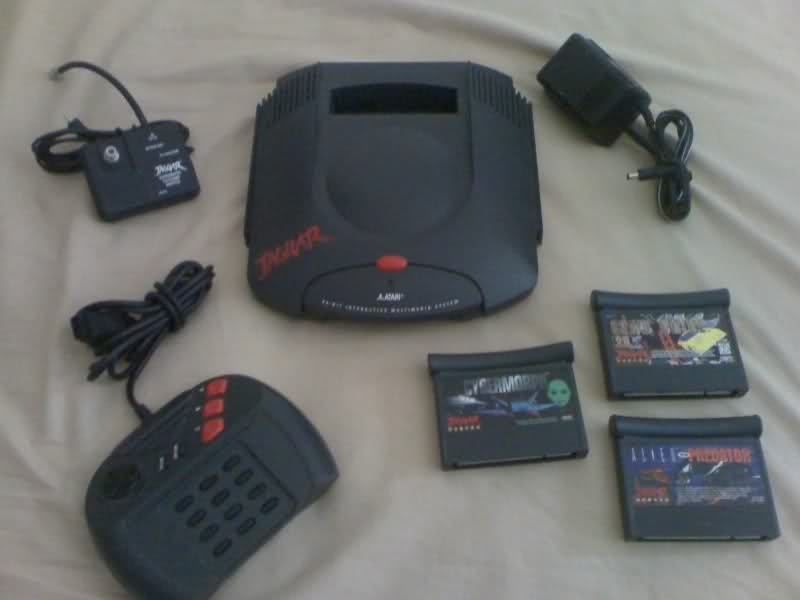 Blech! Seriously, look at that giant hunk of cat shit.
Before I had a bed at my first apartment I slept on that controller.

First off, two observations: the fucking Atari Jaguar is an ugly piece of shit, and the person who designed the controller has a grudge against ergonomics. Holding it is like holding a giant piece of plastic with two rolls of quarters welded onto the sides. It’s got three giant red buttons and a phone key-pad slapped down the ungodly long bottom half. I felt embarrassed holding it, like my girlfriend’s kids were going to walk in and start making fun of me. Oh and sorry, looking at it now it’s Alien vs. Predator, singular not plural. Never mind that there are hundreds of the stupid things in the game. 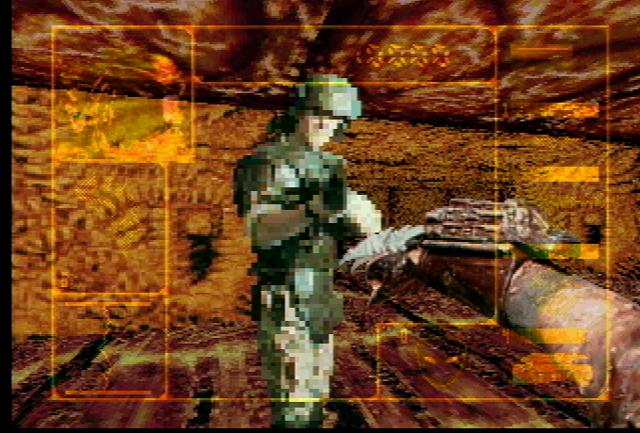 “Look at my engagement ring!” Jesus, look how pixelated he is.

So, marine mode first and the initial impressions aren’t that horrible. The graphics are actually not bad, so let’s start walking down the hall. Oh! I found a shotgun. That’s cool, so we’ll just move on and…wait a minute. Why is my arm swinging back and forth like that? That doesn’t look like I’m walking down the hall with a bad-ass shotgun ready to blast some fucking creatures—that looks like I’m a conductor with a tiny baton leading an adorable little orchestra. I lost my overlay cards a long time ago, so I have no idea what the buttons do. After a bit of experimenting, I can side-step with the 7 and 9 buttons, and sort of strafe by holding “c.” But I can’t side-step this way, only strafe and…oh shit, who gives a fuck?

I wandered around for a while, idly wondering at the horrible design decisions, like aliens leaving permanent pools of acid when you kill them, so that every time you walk over one it depletes your health. This is especially bad in the vent areas, which are so narrow it’s impossible not to crawl over them and take damage. There’s absolutely zero music in the game and I found it’s not nearly as scary hearing those predator whispers or alien screams anymore. And when a predator shoots his shoulder cannon at you, it’s a giant blue blob that slowly ambles on down the hallway, giving you time to calmly step aside, bow your head and tip your hat and say “Ma’am,” while politely waiting for it to pass. 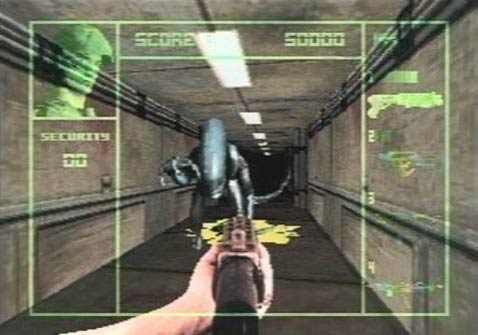 See that pissy-looking yellow pool down there?
That’s acid, and it hurts you when you walk over it and it NEVER FUCKING GOES AWAY.

I only gave the other two campaigns a passing glance. Predator is by far the cooler of the two. He does that predator chuckle I love so much—you know, the one he did right before he blew himself up in the jungle, almost killing Arnie. That Bwuo oh oh oh huh huh huh. The weapons are for the most part pretty neat. Except the stupid shoulder cannon, which shoots way, WAY too goddamn slow. You might as well shoot a rascal scooter out with it to give it a fighting chance, or even just a walker to help it along. The alien campaign is just meh, boring. The whole thing has the stink of a game that was a product of its time, and the world has long since passed it by. Games from the Genesis/Super Nintendo era have aged much more gracefully than this train wreck.

Let’s face it: early 3D polygonal games are just ugly, and the alien and predator sprites are weak all around. Some games are like your dead aunt Margaret. We all miss her a little bit, sure; but really she was an annoying and petty shrew most of the time, and we’re all glad the bitch is six feet under. So, for nostalgia purposes, I give Alien vs. Predator an 8, or no, fuck that, a 9. I loved this game with everything I had back then. But I couldn’t give this thing more than twenty minutes of my time in this day and age without getting bored and grumpy, so how can I rate that any higher than a 1? You’d think that would average out to a 5 or something, but I just threw my rose-colored glasses on the floor and smashed them to bits. Alien vs. Predator, you get an extremely generous 2, you piece of shit.

It was the best of times, it was the worst of times. It was the Metroid High School Hacks 'n' Slash podcast. We don't talk about it anymore.