I’ve never owned a TurboGrafx-16 or TurboGrafx-CD (heck, I don’t even know what they look like), so the Wii Virtual Console is a treasure trove of games I’ve never heard of and might never have the opportunity to play otherwise. Having heard the name Ys thrown about and mispronounced (Pro Tip: it’s pronounced “Ys“) a few times here at GameCola, the opportunity to try out a compilation of the first two games in the series sounded like a decent use of my Wii Points. Watching a gameplay video that revealed Ys to be a spiritual sibling to Crystalis—right down to some of the sound effects—made it sound like a great use of my Wii Points.

After playing Lufia: The Legend Returns, I should know better than to trust old RPGs with surprisingly superb music.

Upon closer inspection, Ys is a spiritual sibling to Crystalis in the same way that a bowl of flour is a spiritual sibling to a plate of chocolate chip cookies. Whereas Crystalis (and practically any other action RPG) lets you swing a sword, unleash tornadoes, and launch thunderbolts at enemies that spit MP-draining goop at you, poison you, fly in circles around you, and explode into paralyzing dust, Ys has you settling every conflict by trying to walk into your opponent more skillfully than it can walk into you. The action consists of nothing but your character rubbing against things until they either kill you or go away, like a bad Leisure Suit Larry puzzle. 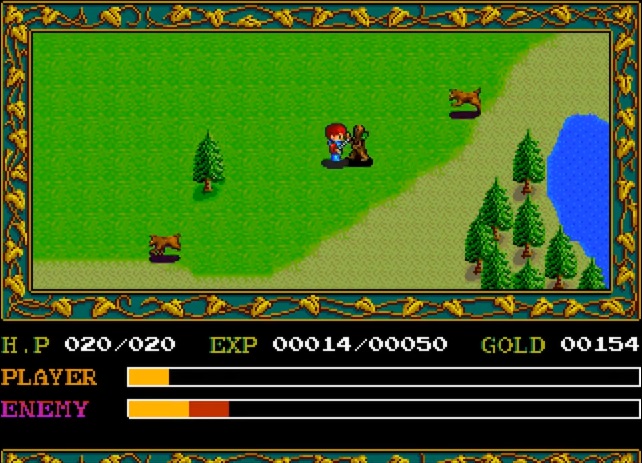 There’s a humorous, charming, Final Fantasy: Mystic Quest-esque simplicity about the combat system for the first five or ten minutes of the game, until you realize this is all you will ever do. At least until Book II, where you gain the upper hand by learning how to shoot fireballs against enemies that still haven’t figured out how to do anything more complicated than walk at you to death. The game tries to get around this monotony by subjecting you to overlong dungeons that use such techniques as “can’t see anything” and “need to backtrack 20 floors to a place you forgot existed” to spice up the gameplay. 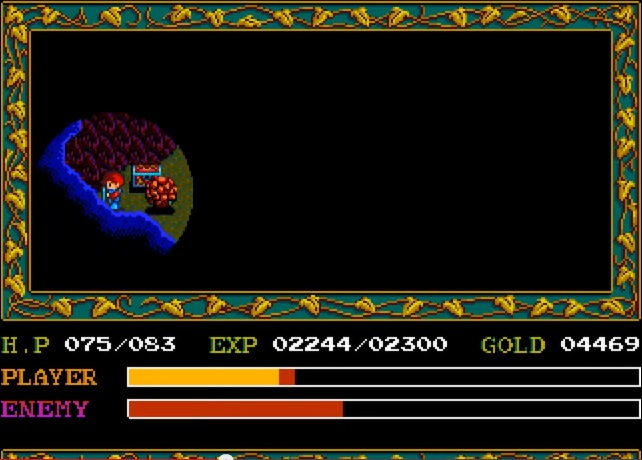 The boss battles, then, should be a highlight of the game, as the bosses’ combat repertoire includes all the boomerang scythes, bouncing fireballs, and periods of invincibility you’d expect from a legitimate challenge. Adol, the protagonist, is unfortunately a little slower than most projectiles and can only turn at 90° angles, so he has only enough mobility to slam into things; dodging them requires a little more grace and speed than he possesses. Thus, surviving boss battles is usually a matter of coming in at a high-enough level with max HP, dancing around in the boss’s face (or spamming fireballs at a distance), and hoping the boss’s health drains more quickly than yours does. This reduces the duration of boss battles, one way or another, to mere seconds. You’re not grinding until you can stand your ground against the boss; you’re grinding until you can kill it before it can fire off more than one or two devastating and practically unavoidable shots. 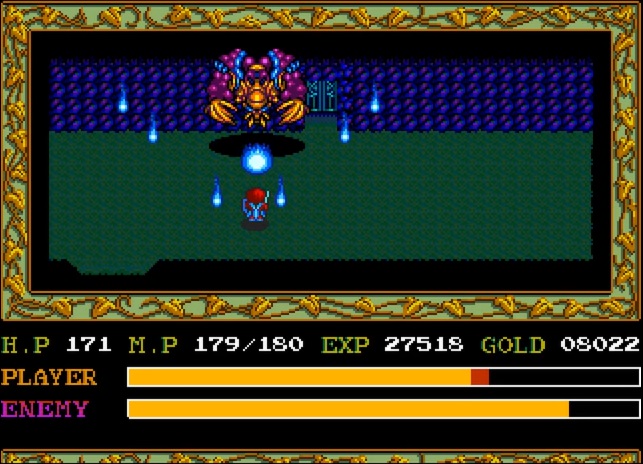 As with Crystalis, items need to be equipped before they can be used. Unlike with Crystalis, items are haphazardly scattered about your inventory screen instead of grouped by category, and all items take up the same equipment slot, regardless of whether they’re single-use or impart an ongoing benefit while equipped. In Book II, you can spend your entire life’s savings on what is essentially a jacked-up fairy-in-a-bottle from the Zelda games, which will restore you to full health if you die while it’s equipped. Even with excessive grinding to survive so many boss battles, it’s beyond unaffordable until you’re about ready to face the final boss. A final boss who appears and disappears randomly, launching random meteors from the sky, I might add. In a game where dodging projectiles is a matter of not being in their way in the first place, there’s not even the pretense of an elegant strategy here—it is pure luck. So yes, this elixir is a fine last-minute addition to your arsenal. 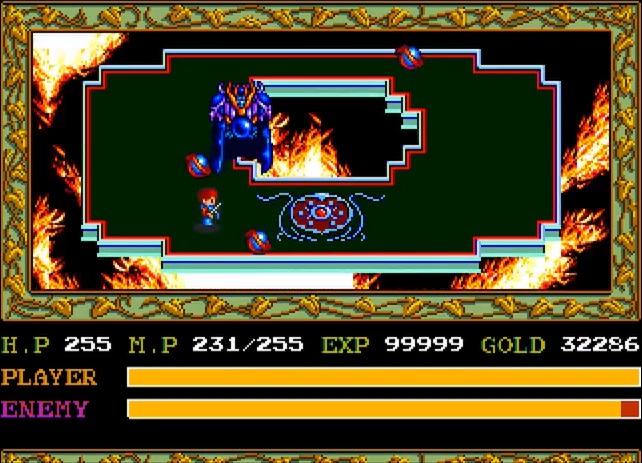 Around the same time, you learn Shield Magic, which makes you impervious to damage as long as you’ve got MP left to burn. You’ve got access to an MP recovery item, which effectively doubles the duration of your shield if you don’t use your MP on anything else. You’ve also got access to an HP recovery item, of which you can only carry one at a time (are herbs really that heavy!?), but it restores your health to the max. Altogether, you’ve got three full health bars and something like a full minute of invincibility at your disposal for a boss fight that, judging from all the others, should take about 20 seconds. Oh, and for good measure, why not equip the accessory item that occasionally makes enemy attacks do no damage?

I’ll tell you why not: Not only does Shield Magic deplete your MP at a constant rate while it’s active, getting hit drains it even faster. One or the other, developers! Worse yet, you are given another accessory at the end of the game that is required to be equipped to fight the boss. Go in without it, and his meteors fly twice as fast and you’re dead within moments. Which wouldn’t be a big deal if  you could change anything you have equipped during a boss battle. 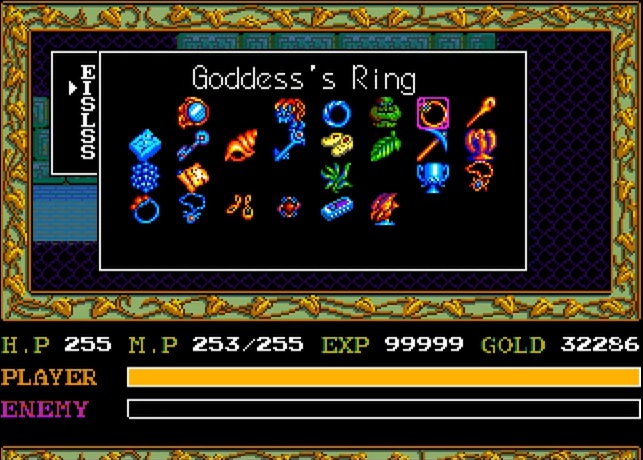 Process that for a moment. Three recovery items, one of which only just became available before this battle, plus your choice of accessories, and you can’t use any of them because you have to have some mandatory item equipped that only bestows the benefit of not getting killed before the battle really begins. At the highest level, with the maximum amount of HP, MP, offense, and defense, you are almost able to whittle down the randomly teleporting boss’s health at the same rate his randomly generated, practically unavoidable meteors drain yours. It’s a luck-driven war of attrition, and it lasts significantly longer than most of the other battles in the game. Fighting regular enemies is essentially a luck-driven war of attrition, too, so before I maxed out on levels, the choice between grinding for half an hour and retrying this awful fight for half an hour was like a choice between eating a big rock, and eating a bunch of smaller rocks to prepare for eating a big rock. How did this ever pass for fun?