So I walk into GameStop one fine day, look around for a second, then make a beeline for the NES games. As usual, all I find are the games that I had passed up during my previous visit. Then I spot it. I stare at this game, it just stares right back at me. I had heard of this game before, but no details. If the price was right, it was coming home with me. Sure enough, when I flipped it over, it had proven itself worthy of a Neal purchase: $2.00. I suppose I am just a sucker for ninja games, so I guess I didn’t realize that when a game is $2.00, it will most likely be so-so. Be warned, Wrath of the Black Manta is exactly that, a $2.00 game. Expect anything more from this game and you will be sorely disappointed. In simpler terms, Black Manta is arguably the greatest terrible game on the Nintendo Entertainment System, and possibly of all time.

The cheesiness begins immediately at the title screen, where we see a poorly drawn, dorky-looking ninja with a dark purple suit and bright white boots. This basically sets the tone for the rest of the game. As if that first impression wasn’t bad enough, they then start to tell you the story of WOTBM, which, in case you are an infant or ridiculously retarded, is utterly laughable. It seems that kids are vanishing all over New York and the police and FBI are baffled…well, that’s basically the entire story. If you were expecting more, then this probably isn’t the game for you. The crappy theatrics continue when we see a phone ring on a table. It is answered by Black Manta, who is for some reason in full ninja garb at 3 in the morning in an average suburban home. Then we see that the phone had absolutely no purpose whatsoever because Manta’s master is now inside his house. Manta’s master briefs him on the situation and sets him on his way. 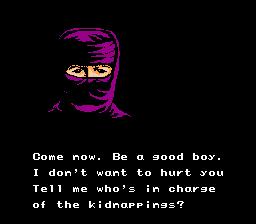 The game begins. I must be fair at this juncture. Some in-game functions are pretty cool. First, you have Black Manta’s Ninja Arts. Ninja Arts are special attacks Manta can do any time during the course of play. The Ninja Arts play a much better role in the game as you proceed, because as you advance through the levels, you better your skills and learn more Ninja Arts. Soon, you can customize which button combos you want for each attack, and also change them mid-game if you want.

Another nifty function is interrogation. I suppose the crappy story left even the star of the game unsatisfied, so during gameplay, you can hold up gang members and get some information regarding the situation. I do feel, however, that Manta could stand to be more persuasive, as he tends to let the gang members mouth off and tell him nothing. One gang member tells Manta that the information he requested was none of his business so Manta just lets him go! I think someone should teach Manta the ideals and principles of being a super bad ass ninja. The information can also come from a trapped child you may happen to come across. Once you destroy every enemy in the room, a horrible cutscene will commence and the child will thank you and give you some information as a reward.

One last bit of help during gameplay are notes left to you from Taro, your master’s youngest pupil. Taro is among the children kidnapped by the evil gang, so he leaves you clues and info he has learned while in captivity such as where a secret door could be found or how to beat a certain boss. If done properly and presented cleaner, these functions alone could have made this an excellent game. Unfortunately, the drawbacks of this game are far too numerous and far too epic to overlook… 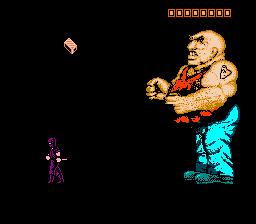 The first of the drawbacks to come to mind are the bosses. You would think that with such a poorly illustrated game, they would take extra special care to see that the bosses would look extremely detailed. After all, they are the bosses. Apparently, the game developers were completely oblivious to how every other game throughout history works. The bosses look worse than an average gang member, and are just about as easy to beat.

For example, at the end of level 2 when you battle a killer totem pole, all you have to do is just stand right where you start and constantly pump out ninja stars. The totem pole does the rest and simply dies. This also goes for the robots of level 4, which are shameless rip-offs of TMNT‘s Mousers. The Voodoo Warrior of level 3 is the only boss that puts up a fight, and even when you die you continue where you died, no redos or boss regenerations. At first I thought this death-continue function was good, but it really makes the game far too easy to enjoy.

Another drawback is the music. You would think that with 5 levels, they would find it necessary to compose more than one song. Well, we obviously are giving WOTBM far too much credit. During the entire duration of your game time, you are bombarded with the same 15 repetitive notes over and over and over and over. By level 4 I had to mute the television before I took a tack hammer and bashed myself in the head with it. The controls are pretty sloppy as well, but why shouldn’t they be, what with the attitude the developers had toward their public. Apparently, Taito sees kids as drooling retards, and if drooling retards are thrilled with playing with a flashlight for 3 hours, they can be just as thrilled with Wrath of the Black Manta. Sometimes I wonder, if I was presented with that choice, which I would go with…

After all the crappy illustrations. After the bland story. After all the terrible dialogue. Nothing prepared me for what happened next. The scheme of the gang was revealed sometime during the game. It turns out that they are drug pushers and they are trying to get their kidnapped kids hooked on drugs so that they can control the entire world. After an entire game, it was all just a giant public service announcement. Manta is just a walking health awareness spokesman, telling every child he releases that drugs are a dead end and only losers resort to drugs. This was too much to bear. Taito had taken a popular figurehead such as a ninja, put him into a video game where he would be viewed coast to coast, and made him spew corny anti-drug speeches to the masses. Enough was enough.

When you ignore the story, horrible graphics, and child-insulting dialogue, this game is really not that bad. The in-game functions are creative and very cool, especially for its time. I find it very upsetting that this game must be cursed due to the fact that its had so many drawbacks. Any way you look at it though, for what it’s worth, Wrath of the Black Manta is probably the best 2 bucks I ever spent.

If you are like me or many of the other hardcore gamers and collectors out there, you'll probably have more than one console, and want to play them without the hassle of changing cords.  Fortunately,