Well, before all that crazy stuff, the game starts out simply enough. You play the part of Dave, the regular dude in town with a slew of different friends. Your quest is to rescue your girlfriend Sandy, who has been kidnapped by the mysterious Dr. Fred. You, along with two friends of your choice, must break into the Maniac Mansion, rescue Sandy, and solve the mystery of the evil meteor, who is secretly controlling Dr. Fred’s every move. The story is a bit cliche, but it was done deliberately so. The entire time you play, the game has a spoof feel to it. Maniac Mansion clearly lampoons the horror scene at every turn. It is this lighthearted approach that makes the game an absolute delight. 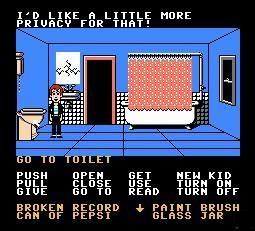 The gameplay itself is somewhat odd. The scene consists of a fully interactive environment, and your character. Below the play screen is a list of actions such as “push,” “pull,” “get,” and “turn on/off.” Below those are any items that you may happen to have acquired. To get around, you must use your cursor to experiment and put together action sentences for your character. For example, to go through the front door of the mansion, you must “pull door mat” then “get key” and then “use key in front door.” Many sequential puzzles like that are necessary for progress in the game.

As the game progresses, the puzzles get a lot more complicated and involved. This is to be expected, as games generally get harder as they near completion. What’s not to be expected, however, is the creative and funny additions to the game that just make the game that much more in-depth and enjoyable. For example, when you are in the bathroom, and you create the phrase “use toilet,” you character turns toward you and says, “I’d like a little more privacy for that!”

Even though such an action system is necessary for a problem-solving game of this magnitude, moving the cursor back and forth throughout the screen can become very annoying. Towards the end of the game, within a few seconds I had to shut off the power to the mansion, put new batteries in the flashlight, turn the flashlight on, pull out my tools, and work on wires…all the while moving the cursor back and fourth at a retardedly slow speed. It is enough to make you wanna kick yourself in the head as you are frantically trying to beat the clock before the power turns back on. But alas, there is no other way to control the game that would allow as many different actions as this, so complaining really isn’t the thing to do. It’s just something to keep in mind in the realm of game control.

Graphically, the game is somewhat lacking. Certain areas, such as the terribly animated intro movie, could have been done a good deal better. In-game screens are acceptable, by which I mean you can tell that the object on the table is indeed a chainsaw. The audio in the game is both amazing and terrible. Let me explain. Sound effects such as the car jets and the telephone all sound like the same thing: a low-pitched buzz. On the other side, the music in the game is downright incredible. Dave’s theme, especially, was stuck in my head for the entire month I was playing this game, and isn’t quite out of there yet. It would be a bit unfair, however, to judge on graphics and sound, as it is not really that type of game. Contra is just two bad asses running through the jungle blasting foolish bastards. A game like that should have pretty sweet graphics to compensate for the lack of story and strategy. Maniac Mansion is about strategy and in-depth problem solving. In a game such as this, graphics aren’t really necessary.

Overall, the game is fun as hell. Problem-solving had never been such a pleasure until this game strolled into town. Because of its in-depth problem puzzles, it can be enjoyed by many ages. And the fun isn’t lost on the replay, as you can assemble a new trio of friends, therefore creating an entirely different chain of events. The humor addition is just one extra push to making Maniac Mansion a huge success in my book. The only real complaint I have is that I’m merely borrowing this game for the review. Good luck getting it back, Paul! (insert sinister laugh here)

He may be retired, but he's still a programmer at heart.