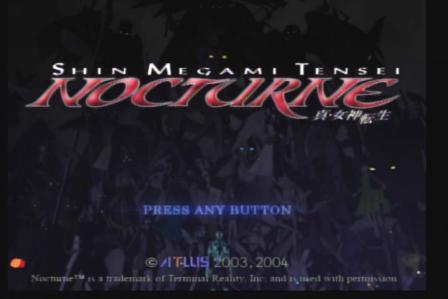 What are you still doing here? Show’s over, buddy; I’ve got stuff to do.

Oh, that’s right; I’ve got to tell a bunch of dick jokes to explain why you should buy this game, right.

My relationship with Japanese role-playing games has been a changeable one. When I was younger I spent countless hours watching my androgynous avatar’s levels rise in disproportion to my social life. But as I grew older and less retarded, I came to realize that I would sooner eat coal and try to shit diamonds than play another moment of Final Fantasy X. I’m honestly not even sure why I played them in the first place; most JRPGs follow a boy of questionable sexuality  joining up with a childhood friend, a retard, a silent lone ranger, a girl retard, a cat girl, and an honor-bound warrior whom band together to defeat the dark lord Arnold and discover frienship while using the heart of the cards and NYYAAARRRGG! UNCLEAN! MUST WASH AWAY THE HORRIBLE PLOTS!

So when a friend of mine told me of Shin Megami Tensei: Nocturne, a JRPG that actually had a good storyline and gameplay that required that oh-so-undervalued muscle known as the brain, I was a bit skeptical. In fact, I’d be more likely to believe that leprechauns exist, gerbils ruled the world, or there’s a Joss Wedon show that lasted longer than two seasons.

But after beating the game, I can safely say that Shin Megami Tensei: Nocturne is weird.

The story revolves around you (yes, you) as a Japanese high school student who goes to visit his teacher in the hospital with two of his school buddies. When you get there, you find out that there’s a cult trying to start a supernatural event called “The Conception” which will result in the end of the world as we know it.  So with the help of your friends you must band together with an unlikely group of renegade cult members, one of them being a catgirl for some reason, to save the world and learn the true meaning of Christmas all in the process. Hooray!

Well, that last part doesn’t quite go the way I described it. There are no renegade cult members, no catgirls, and you don’t so much save the world as you go to the top of the hospital and watch it all blow up.

You soon find yourself in an alternate reality Tokyo, one that is entirely populated by demons, and, I’m not kidding, Lucifer himself turns you into a demon for reasons unknown, and you move around this dystopian world attempting to find out where your friends are, what the hell is going on, and maybe return everything back to normal.

To me, this whole concept almost seems like a parody of most JRPG conventions. Your character goes into the final dungeon and gets face to face with a guy who can only be described as the final boss of any regular JRPG, not as a stalwart hero of the land, but as a dumbass high school student who got lost from his tour guide group. Hell, your freaking teacher has to come in and save your ass, an event that could have only been more pussy if she turned out to be your mum, too.

The story is open and ambiguous throughout the whole game; at first, you’re simply trying to get your feet wet, but soon you’re investigating subtle metaphors for humanity and religion that put most other JRPG storylines—”gather up a group of unlikely heroes to take on the evil empire of whatever”—to shame. A lesser man might just assume he or she is just trying to save his or her friends and “restore the world,” but the story becomes more sinister as you play. The game also has multiple endings depending on what you do through the game, and without giving out major spoilers, they are all freaking badass. This game sits in the back of the bus wearing a bandanna, where androgynous teenagers don’t venture for fear of getting shanked.

The first thing you’ll notice when playing SMT: Nocturne is “This seems a hell of a lot like Pokémon!” Yes, the game does have you collect monsters in order to battle larger monsters, but unlike his prepubescent counterpart who loves to force monsters into captivity so he can pit them against each other in bloody, super-powered dog fights, the main character in Nocturne takes the diplomatic approach to raising his army. When you encounter a demon, you have a chance of actually talking to them and asking if they want to join your team, or want a cup of coffee, or how the weather is, and they could answer “Yes,” “Yes,” and “The huge orb of apocalyptic death is shining brightly today. The weather is the least of my fucking worries!” It’s also worth mentioning that the main character is actually usable in combat, meaning you can actually have him punch out monsters, which would have made Pokémon so much better if you could actually kick an Abra in the head instead of dicking around with Pokéballs.

Another thing I like about this system is that it makes the demons seem more human, if that makes any sense. Sometimes when you encounter a monster he just wants to talk. Seriously. Or sometimes he just wants to give you an item to pass off to his friend that’s in your party. Sometimes they just get bored and wonder off. It’s a hilarious little satire on the JRPG trope of “walking around and killing random wildlife,” because how the hell do you know that huge ass lightning bird wasn’t protecting his nest? What if he was just going for a stroll when you started to throw fire at him? What the hell is wrong with you people?! By this logic, Tidus should be considered an environmental hazard worse than nuclear waste.

The monsters you can get in the game are pretty epic, most of them largely resembling mythological creatures from various cultures, such as Greek gods and Japanese oni, among many others. They are all beautifully designed, and they even have distinctive personalities that set them apart from each other. They definitely beat out the pussy critters from Pokémon, I can tell you that.

On my team I had, no joke, a demon knight, Ares the Greek god of war, a rabbit, a bondage queen angel, and Lucifer. The goddamn devil himself. If that doesn’t interest you, believe me, you have never played a videogame in your life until you see El Diablo deliver a flying elbow drop to a magical snowman. Seriously, it can happen in Nocturne. This is probably the biblical equivalent of the whole “My dad can kick your dad’s ass” argument you had when you were a kid. Except replace “Dad” with “Raiden, god of thunder.”

The game also sports an extensive monster breeding mechanic that works well, if you can wrap your head around all of the little rules. I had enough inbred multisexual pairings going on to keep Jerry Springer going for years.

But probably the best part about Nocturne is the combat. You don’t just randomly hit the X button until everything dies in front of you; no no, this game requires you to actually use your brain. Each demon, including you, has a set of strengths and weaknesses that can turn the tide of any battle. When you hit a fire monster with an ice spell, you get an extra turn, and an extra chance to dish out the pain. But, if one of your monsters is hit, then the opposing team get more opportunities to blow your ass up. Resistances also play into this too; one wrong move can result in an instant party kill if you’re not careful. I honestly wonder why the hell more JRPGs haven’t done this, because this system actually forces you to use strategy. With the right team, you can win most battles in the first turn, or lose them just as quickly.

Unfortunately, Shin Megami Tensei is not all gumdrops and ice cream. Just like a rose, Nocturne does have its share of thorns that keep it from being the best. Well, not so much thorns as little cannons that fire whenever the game hates you, which is all the time.

The first problem is that Nocturne is hard.

“A hard JRPG? How can that be? Can’t you just do some levelling and try again?”

Well, my answer to that is SHUT UP AND I’LL TELL YOU WHY! The focus on weaknesses is something that, although is helpful, will often work against you just as well. Some of the later bosses don’t have any weaknesses, and as such, have to be beaten the old fashioned way, and God forgive if you have a critter that’s weak against its attacks. Even just one monster that is unfortunate to have a weakness, or even no resistance, to a fire spell can give your opponent enough free moves to do a one-man ass kicking show on your entire team and still have enough time to throw a keg party afterwards. Sometimes a boss will send you back to the drawing board, forcing you to breed a specially trained killer in order to defeat the boss, which will become totally useless in the next area as the monsters there are resistant to his attacks.

Another thing to worry about is that the game hates you.

Seriously, play it enough and you can almost feel the utter distaste for sentient walking meat bags filled with water. Sometimes the game comes to work drunk and decides to take its frustrations out on everyone, manifesting itself as bullshit kills.

There are certain attacks that have a small chance to instantly kill a party member, which are usually known only to specific monsters. And when you suddenly encounter seven of the buggers whom only cast that bloody spell, that small percentage spells instant party death. I could see the game quite literally flipping me off.

Overall, though, Shin Megami Tensei: Nocturne is the greatest game you never played. It’s unfortunate that I found this game much later in life, because if I had found it, I might have turned out much differently. I might have not wasted my time with Final Fantasy X and its ilk, and maybe I wouldn’t have hated JRPGs so much. If you are, or have ever been, a fan of RPGs, you owe it to yourself to pick this up. If you don’t have the money, then kidnap the President’s daughter and hold her for ransom money. It’s the only way.