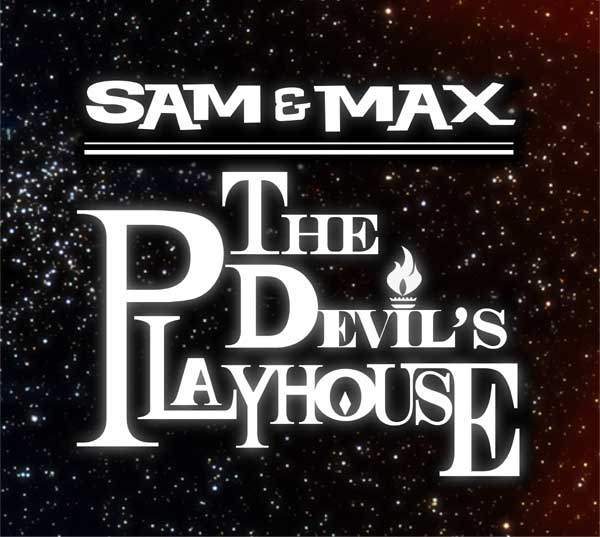 All right, guys. Here we are again with Sam and Max: Freelance Police, once again out to save the world, or kill lots of people trying. They go where no dog and rabbit-thing have gone before, daring to travel the world, letting no inventory go uncluttered, in their quest to rub various knick-knacks together in order to keep us safe. In this adventure, they are– 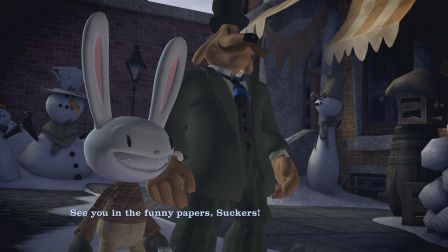 …Who the hell are those jerks?

Well, these guys are Sameth and Maximus, the ancestors of our heroes, whom appear on some magical film reel–THEY HAD PARENTS?!

Wait, wait. Hang on. We need to start from the beginning.

After the duo beat Skun’kape in Episode 1, Sam and Max discovered the fossilized remains of themselves next to a mystical film projector, which allows them to take the form of their ancestors, Sameth and Maximus, on their quest to obtain the Devil’s Toybox from the Tomb of Sammun-Mak. All of this has a vague resemblance to the evil Lovecraftian god Yog-Soggoth, whose current role in the story is…well, being an elderic horror, I suppose. This is Sam & Max, so it’s not like Yog-Soggoth needs any reason to come to our world; he probably just doesn’t want all those human recipie books he bought off Amazon to go to waste.

The narrative is pretty straightforward—Sameth and Maximus act the same as their less-clothed decendants, bouncing wit and narcissism off each other in order to solve puzzles—but the aforementioned projector gives Max the power of “astral projection,” allowing you to jump between different parts in the story at will. It’s definitely a very interesting mechanic, as you gather information from one source in a different part of the story and bring it to another time, where it can help solve a puzzle. It does sometimes add to the frustration of adventure games, as you’re never really told when you’ve done as much as you can in one reel, which then forces you to flip back and forth between scenes to figure things out like you’re an Alzheimer’s patient trying to watch The Da Vinci Code, but overall I do like how it takes away some of the busywork. Usually when you’re playing an adventure game, you have to practically put the whole story on hold to go wandering around, clicking on anything visible in case you missed an item, but this time you can just jump to another reel and solve another puzzle before coming back to the one you’re on.

I will give Telltale credit—this is probably their prettiest game yet. If Episode 2 were a woman, she’d be that nerdy girl you knew last school year who suddenly became hot over the summer. Everything is crisp and interesting; whatever they are paying their artists isn’t enough. I really dug the whole 1900s feel to the game, and everything from the older version of Sam and Max’s street to the Tomb of Samun-Mak itself looks great.

As for the gameplay itself—well, it’s an episodic game series. What do you expect? I could just copy and paste my review of the last episode and go off playing the third one, and you wouldn’t miss much. Well, all right, besides the traditional item rubbing that comes with adventure games, Maximus has gained some new psychic toys to play around with. I was a little curious what they were going to attempt, because you can’t get more awesome than the teleportation, future vision, and telepathy from Episode 1. This time around they’ve given you a creepy doll that reminds me of Chucky, which gives Max the power to throw his voice into any person or object he sees, which can and does get used for hillarious results. Believe me, I can personally think of several different ways I could fuck with the world using that power, most of which contain the phrases “Oval Office” and “toilet.” Hell, just let me loose in the natural history museum and watch me scar an entire generation of first-graders. The second power turns you into a can of peanuts.

I mean, what the hell, Telltale? Is that really all you guys could think of? A power that temporarily allows you to blend into the environment at a Sobeys? I can think of many other abilities I’d much rather have! I mean, it’s useful, but dammit, it’s boring! It’s like having the power to accurately calculate the current sea level of any city: Useful in a pinch, but not cool enough to score you numbers at a party.

Anyways, as I said before, some of the puzzles are awesome, as usual with Telltale. My personal favorite is when you have to mess around with the various mole curses, getting the moles to hate you enough so that they afflict you with either bad luck, sexual rejection, or even turn Max into a cow. The ability to jump between the reels also adds another dimension to the game, proving once again that Telltale is great at what they do: Creating weird puzzle shit for the player.

There are a few things that bother me about this episode, though, that keep it from being amazing.

First of all, I’ll admit that I was a little too harsh on the first episode. After I played through it again, I found a lot more to like, and there were some genuinely funny jokes that were true to the characters.  This episode, though, seemed to be lacking a bit, as if some of the jokes were written for another series. I did a little research, and found that the writer for this episode was actually the guy who wrote for the Wallace & Gromit games, which although I haven’t played, might explain why I didn’t take to this episode so much. Some of the jokes imply a sort of nativity and stupidity to the characters, and attempt to play straight all of the tropes that Sam and Max are supposed to parody. I did laugh a few times, but I think Sam and Max were at their best when they had two or three head writers on staff. I know Dave Grossman is probably on vacation right now for having finished Tales of Monkey Island, but I really think Telltale should track him down, sedate him, and lock him in a room with the other writers.

Also, remember how I was complaining that the game seemed barren of all of the old characters, without the addition of any new ones? Well, it seems that somebody at Telltale read my little review and added in a few new characters, as well as some old faces. The problem with this is that these recycled characters didn’t NEED to be recycled. I did like the teenage girl mole and the odd grandpa mole, but let’s just say a certain vampire makes a return appearance that seems a little unnecessary. We didn’t really need a back story to him, as he served his purpose in that one episode. It’s like taking a banana and stapling a picture of a strawberry too it: The intention is nice, but in the end all you’re gonna end up with is a nasty paper cut.

The ending is also a bit of a flop, ending on a weird cliffhanger that leaves you feeling off. It’s nothing climatic or shocking, but it just didn’t feel right in the universe that Sam and Max put themselves in. Just take a look at the title for the next game, and you’ll have an idea of what it is.

So, in the end, I’m not sure yet what to think about this new season. The first episode started off promisingly, but the second one, while having some good ideas, didn’t really do it for me. But then again, Telltale still has three more episodes to go, and I’m still interested to see where they plan to take this, so I’d tell everyone to stick around. If you haven’t bought the new season yet, wait till you read my review of the third episode, and come back.

To sum it up, if Episode 1 was the start of a great date with an attractive woman, where she rests her head on yours during the movie, Episode 2 was her spilling a wine glass on your favorite suit and demanding that you pay for it.

The crew gets lost because this forest was a lot easier to navigate in the actual game.