Recently my job has done me an unprecedented favor in actually giving me money, so after taking care of that whole “feeding myself” business, I went over and bought a game called Alan Wake, which this post is going to be about. So, as a precaution, I’m going to put a huge SPOILER WARNING after this paragraph, which will probably be in bold and in capital letters.

Now, Alan Wake was developed by Remedy, a company who’s known for naming protagonists after the primary feeling they encounter, often with hilarious results such as “Max Payne”. They have decided to keep with this time honored tradition with their new protagonist, Alan Wake (most likely an ironic name, because it’s the opposite reaction of what the average Xbox player would have while playing this game). Wake is a crime fiction writer who’s been going through a bit of a depression, having not written a book for about two years. He decides to go on holiday with his wife to Bright Falls, a town so podunk and hillbilly I wouldn’t be surprised if everybody’s family tree was just a series of straight lines.

As it is always, things aren’t as they seem—his wife gets kidnapped, and our hero sets out to correct right from wrong, saving the world and all that jazz.

You might complain that this has a resemblance to a certain pussy-whipped protagonist who happens to wander around in foggy areas trying to avoid a guy with a triangle for a face, but I would retort by smacking you upside the head, you critic. If the main character didn’t have a loved one currently about to be penetrated by Satan’s cock, then what’s to stop him from catching the first ferry ride out of town, rather than risking his life to put down an evil entity that currently isn’t doing anything other than fucking with some rednecks. 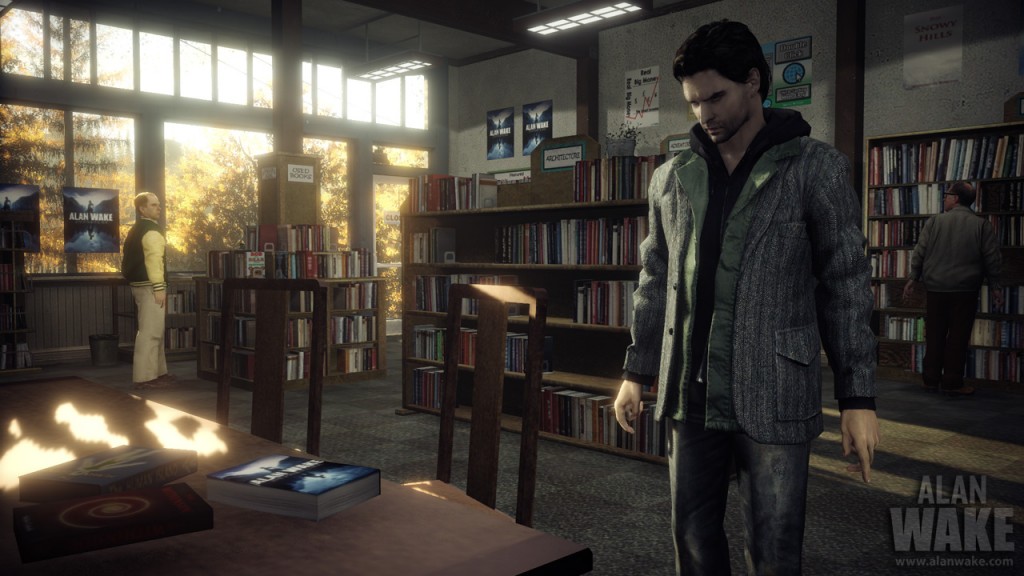 The story itself is pretty good, with its own set of twists and turns that lead up to a rather satisfying conclusion, but I do have a problem with the titular character himself: Alan Wake.

The problem is that he’s a Keven Spacey short of the usual suspects, if you know what I mean. The guy’s sort of a cunt, is what I’m saying.

Ok, so he’s supposed to be a writer, right? And supposedly he’s a pop culture icon who often appears on TV, as well as having many female fans. Pfft, fuck off, Remedy. I don’t know what magical fantasy world you guys live in, but writers aren’t very sociable people. In fact, most of them keep to themselves. Hell, even if you’re lucky enough to appear on Oprah, unless your name is J.K. Rowling, Stephen King, or maybe even Stephanie Meyer, you aren’t exactly going to be swarmed by fans when you walk down the street. Women don’t go for writers. A bitch would rather go with an artist than a writer, because the general consensus is that anybody can be a writer. Look, I don’t see Stephen King currently swimming in a pool filled with vagina, so what chance have you got?

That last paragraph was more for the setting itself, so all right, I’ll actually talk about Alan now. 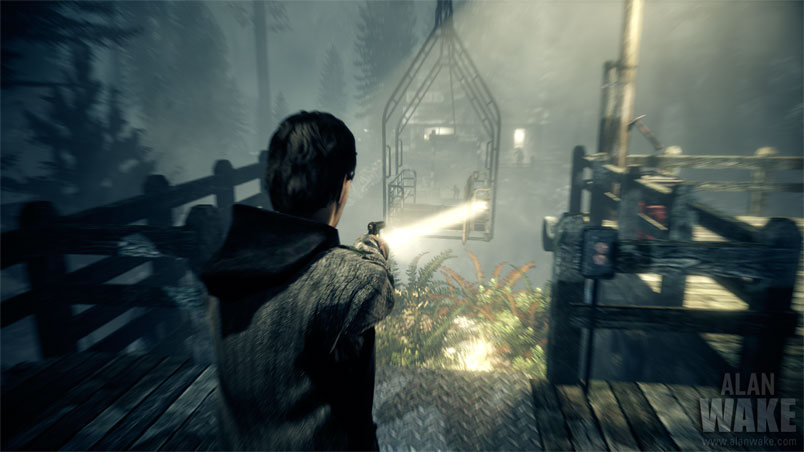 For a writer, Alan isn’t very quick witted. That’s not saying he should be wise cracking at every opportunity, but he should at least be more interesting than a wet paper bag. He has this thing about narrating every action with such ham-handedness that it would make his noir cop ancestor blush. He describes EVERYTHING that is happening, like I’m in a bad Frank Miller comic and the audience is a blind mouse. Seriously, he’s like “I needed to get past this gate, there must be a generator around here somewhere” or “The darkness swallowed up the ground, I had to get to the streetlight fast” or “I was really hungry, I should probably get some chips. There must be some potato chips in the fridge—” SHUT UP WAKE I’LL GO FIND THE FUCKING CHIPS, JESUS!

The thing with Max Payne was that his inner monologues were par for the course in the universe he was in. All of the hard boiled detectives walking the beat would narrate and talk about this or that in a poetic way, sort of like Shakespeare if he got punched in the face a few times. But with Alan, it just sort of detracts from the horror of the events that are taking place. It would be like watching The Hills Have Eyes for the first time, but flicking on the commentary track.

Overall though, I feel like it’s a step in the right direction for video games. Forgive me for getting a little bit introspective, but I’m going to be using a lot of big words from here on out to describe my feelings of games as a medium. The medium is populated by nerds, like myself. As such, there is a certain cultural restrictiveness that forces games to only ever make games in the sci-fi, fantasy, or military genres. There seems to be no willingness to go deeper, to explore further into the human psyche or society itself because, well, as nerds, all we want to see is Kratos forcing a minotaur to give a terminal blowjob with his blade. I’m happy that there is some willingness to get away from that and start really exploring concepts beyond our understanding.

WHOOPS THERE I GO AGAIN WITH THE ART STUFF. Guess I’d better wrap this up before I start talking about how Dante from Devil May Cry represents the folly of man’s greed.

Spiritual Warfare is yet another Bible-inspired Nintendo game from those nutty folks over at Wisdom Tree.