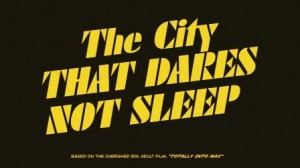 Well, here we are, the final episode of the season. The last stretch before home! It’s been quite an interesting ride from episode 1 to here, and I’m just as excited to play it as you are. But before I get started, I feel the need to put up a little spoiler warning. SPOILER WARNING! BOOOP BOOOP! THIS IS NOT A DRILL! I REPEAT, THIS IS NOT A DRILL! IF YOU WANT TO KNOW THE PLOT SO YOU CAN BE IN WITH THE COOL KIDS, THEN GO PLAY THE GAME. OR YOU MAY READ THE PARAGRAPH BELOW TO HEAR MY THOUGHTS.

All in all, I did like this latest season of Sam & Max. While the writing wasn’t as strong as the first and second seasons, it was still pretty damn funny, and best of all it did away with a lot of the bullshit you usually deal with in adventure games. Despite the flaws, if you’re a Sam & Max fan, you’re going to walk away happy, and if you’ve never played adventure games before, then this is a pretty good starting point.

Good, I hate that guy. 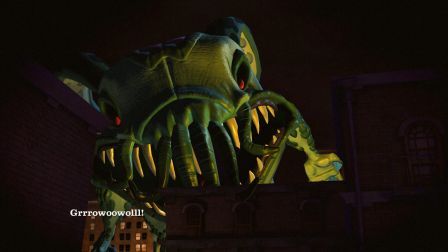 In this episode of Sam & Max, we start off right where the last one ended, with Max turning into a large Lovecraft-esq beast  from the dark dimension  and going on a Godzilla-like rampage through the city. He also releases these flaming Max head spores that feed off of people’s nightmares—I’m not sure where they come from, but H. P. Lovecraft monsters don’t have a problem finding orifices to spew things out of, so I don’t want to look too much into it. These flaming Max heads go around, making witty banter, and attempting to make the entire city fall asleep. I don’t know why he’s attacking a cartoon city—if he were to attack my neighborhood, he could live forever on the broken dreams of college students. Naturally, it’s up to Sam to gather up a team of specialists in order to infiltrate the beast and find a way to save his little buddy

The story wraps itself up nicely, through a somewhat questionable ending, and the writing is damn good, solid jokes all the way through, and a few references for the older fans. As always, the music, sounds, and voice acting are top notch, all of the voice actors hit their mark and I sincerely hope they get a lot more exposure, because their delivery punctuates the jokes in a way that nobody else could. I do have a problem with the ending, but I’ll get to that a little later on.

Wait, I have another problem. What’s with us still calling it the Devil’s Toybox? If it’s really the “Devil’s Toybox” then where is everyone’s lovable prince of darkness? We’ve already been to hell, and even helped Satan regain his dark throne, so shouldn’t he be around here instead of all these Cthulu references— 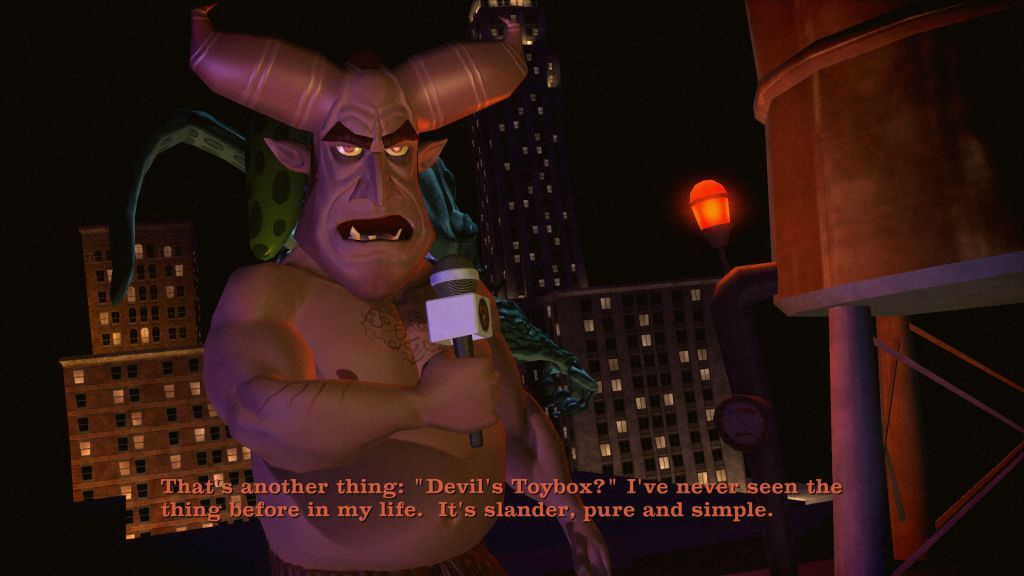 The City That Dares Not Sleep is sort of like a greatest hits album from a famous band—containing most of your favorite songs while missing some of the older band members who have either died or gone on to horrible solo careers. Almost everyone returns, and even those who don’t return get brief references. Giant Abraham Lincon returns in all of his robotic slave-freeing glory to lead the Maim-e-trons into battle, to whom Momma Bosco gave a software upgrade so their song references would be more up to date. Mr Featherly returns to give Sam an egg, and even the Soda Poppers are momentarily referenced. It was a delight to see that none of these characters have died, and it was a fun little adventure seeing them interact with each other once more. My special shout out goes to Satan and Jurgen, who are doing a public service announcement for Hell.

The gameplay is missing a large piece of the last few games, and that piece is Max. The Toys of Power were destroyed in the last episode, and now that the lovable hyper kinetic rabbit thingy is a Yog-Soggoth creation, you don’t 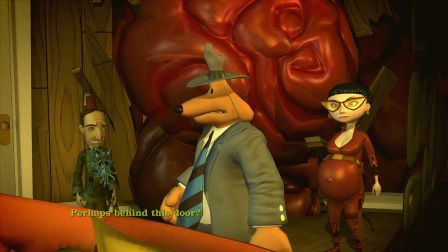 have access to any psychic powers. That’s not cool, Telltale. That’s like letting a kid build a sand castle for four minutes then telling him he can only play in half of it. They do try to make it up to us by adding some neat and funny puzzles, as well as other things, but it really doesn’t compare. They DO give you a chance to walk around as evil Max, but it doesn’t really amount to anything other than a few quick jokes. I would have loved the opportunity to wreck up some buildings, Rampage style, in compensation for not having psychic powers.

Well, besides the gameplay, I do have two other complaints.

Despite him being in the title of the game, Max is mostly absent from this episode. He’s been replaced by various flaming Maxes that are trying to force the inhabitants to sleep so he can feast on their nightmares (and probably some Glazed McGuffins, knowing Max). Each of them are funny in their own way, but I do miss the timing Sam and Max had on their jokes together. I guess it’s true—you never know what you have until it turns into a giant dream-eating hellbeast.

What? No I didn’t get the saying wrong.

The second issue is the ending, so let me throw in one last SPOILER WARNING before we go onward.

Honestly Telltale, does Sam & Max really need to be so serious? I mean, I understand weaving a compelling narrative into Monkey Island or your other games, but this is a show that is famous for smacking genre clichés upside the head and telling them to get jobs, the lazy bums. So, the ending was unnecessarily dramatic. I know Sam and Max are buddies, and you’ve made several jokes about them being gay, but you didn’t fool me with the whole “Max dying” thing.

Ok, I’ll admit, for one brief, VERY BRIEF moment, I cried inside.

But all in all, as I said at the beginning of the review, I was happy with this season, and I encourage fans both new and old to pick it up.

Also, Telltale, why haven’t you emailed me yet, hmm? Trying to be coy about it, are you? You think I didn’t notice how you changed it up the last minute and had Satan address the whole Devil’s Toybox thing? Don’t worry, I know you just want me on your writing team. In fact, you probably want me writing for you so much that you’re just too shy to email me about it.

Well, that’s OK. It’s only natural. But…ya know…I’d be cool with it. Just saying. Not that I’m begging for you to email me! Because…You really want to pay money for my linguistic prowess…You’re just too shy to admit it. I think. But that’s OK! You can email me. As soon as possible in fact. I’m not going to guilt you into emailing me by telling you that I don’t live in a mansion and I scrape what little I can from temporary labor work. Or that I live as a 19-year-old in a perpetual hellhole where my parents constantly bother me for rent while I slink ever slowly into a dark abyss populated by bums and people with art degrees—OH GOD I CAN’T TAKE IT ANYMORE I JUST CHEWED MY ARM OFF FOR NOURISHMENT GIVE ME A JOB PLEASE! AFAFSGJSGIIGGSASFSJDGISHGIUHGDFIDGFKLDJFLIH!

Thank you in advance. 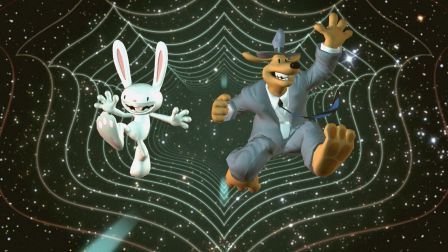 THANK YOU FOR CREATING MY FAVORITE ADVENTURE GAME SERIES.