Welcome to “Moddus Operandi”: The intentionally misspelled column where I showcase videogame modifications and total conversions! Today we are looking at:

Today, we’re gonna go back in time. A time when men were courageous, women were masculine and didn’t have as many rights as they have today, and when a younger, college-less me wrote his first article for GameCola, about Pirates vs Vikings vs Knights.

I was originally going to check out another mod, but then I learned that this game is not only officially supported by Steam, but they’ve added a new class! So I figured, what better way to reintroduce my column with one of my favorite mods available out on Steam?

For the uninitiated, Pirates vs Vikings vs Knights is a neat little Steamsource mod where you choose either the seaworthy and rustic pirates, the berserker murdering PETA nightmare Vikings, or the solidly dignified and somewhat Catholic knights.  That’s it. What’s that? You want a story? Go read a book while you sit in a scented bath while you wash your vagina, you pussy! This is a multiplayer mod, about three deadly groups of people from three very different time periods, so the story is about as essential as a turtle in a House of Commons meeting.

No, the main attraction of this mod is the gameplay, which is balls-to-the-wall stabby sword wahey fun. PVK switches out the shooting aspect from Half-Life for some good old-fashioned head-decapitating melee combat. Instead of holding down the fire button until everything in front of you breaks, the game has you slicing, stabbing, and blocking in various different ways, and even lets you charge up your swings for maximum carnage. Each class even gets their own special attack meter, which you fill the better you do in combat. The Captain can fire an explosive shot, some of the Vikings can do a special charge move, and one of the pirates can stick his sword out and fly through the air like he snorted a line of Tinkerbell’s fairy dust.

Every character class has melee weapons, with a few of them having any sort of ranged weapon, and for the most part, the big muscular barbarian is going to do more damage then the small rogue armed with a crossbow, despite what logic might tell you. Apparently, the developers look at historical accuracy the same way a ten year old boy would, because I seem to remember the crossbow and black powder rifle ending the age of knights and traditional warfare; instead, anybody primarily using a ranged weapon is basically a free meal ticket, so they might as well glaze themselves in honey so that the Vikings will have an easier time roasting their heads.

The Knights have the Heavy Knight, the self-righteous collection of plate mail and hypocrisy who is pretty much the game’s tank, and the Assassin, a rogue who uses his crossbow, longbow, and stylish goatee to punish opponents from afar. Because the Assassin is the only primary ranged class in the game, most of your time is going to be spent decorating the walls with your missed arrows, and running away like a little bitch. Granted, when these two work together,  they have a distinct advantage over the other classes, which is hilarious since they get their asses kicked all the time by the other forces in history.

The Vikings come to the fight with  the Beserker, a mighty barrel-chested bearded man who goes into battle wearing only a loincloth to hide his massive testicles; the Huscrl, the one with the foresight to go into battle in full armor and carrying a shield; and the Gestir, the spear-toting cousin of the Huscrl.

The Beserker comes from the school of thought that armor is for girly men, and he blocks incoming arrows with his massive beard, which apparently has the properties of kevlar, because he’s got some of the most armor and health in the game. Not only that, but his special attack is screaming at the moon, which makes him fly off into a rage of dancing blades and decapatated limbs. There isn’t much to say about the Huscrl, really—he’s got a large two handed weapon, a sword & shield combo for when you want to hit something, and throwing axes for when you feel your opponent needs a laugh. The axes are hard to aim, you only get six of them, and they do so little damage that you might as well rush headfirst with your battleaxe anyways.

Finally, we come to my favorite swashbuckling, grog-guzzling, women-stealing pirates! They are the only ones with black powder rifles! They also have the lowest health, paradoxically, but we’ll get into that later.

The pirate classes are the Captain and the Suicide Bomber. Yes, that last one is pretty much true. I know the game might trick you by labeling the latter class as the “Skirmisher”, but the only skirmish going on is between kegs of gunpowder and limbs. The “Skirmisher” has a cutlass that does no damage, several flintlock pistols that do no damage, and a huge keg of black powder on his back that does ALL DAMAGE.  Despite carrying this on his back, he’s also the fastest class in the game, and the weakest. If you so much as sneeze on him, his bones will disintegrate before he hits the ground. This also means that your strategy is to throw your powder keg at your opponents, then dance around them and poke them with your sword like a fat kid on the playground.

The Pirates also have access to the Captain, who is equiped with a better cutlass, a blunderbuss that is basically a single-fire shotgun,  and an attack parrot! Yes, polly doesn’t want a cracker, he wants your fucking eyeballs. The best part is that, in the options menu, you can name your parrot, and thus begins the adventures of Muffins, THE DESTROYER. 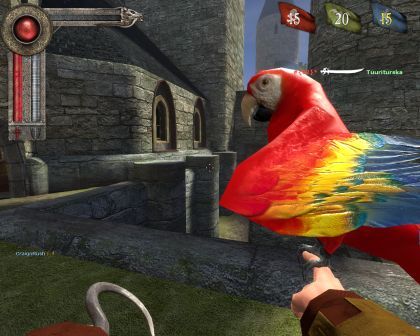 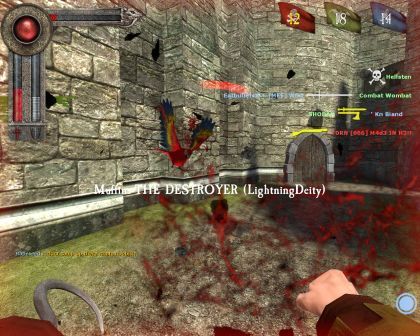 YES MUFFINS YES! TASTE THE BLOOD OF THE PHONIES! THE TIME OF REKONING HAS COME! DESTROY! DESTROY!

As for the game itself, well, it’s damn fun. Not just fun, but DAMN fun. Each class is unique and special in its own way, the combat is fun and engaging, and other than a few balance issues, this might just be on my top ten list of favorite game mods. Even the ranged combat is fufilling, once you get the hang of it. If you’ve got Steam and a copy of Half Life 2, you have no reason not to check this out.  It’s a fun game, if a little unbalanced, and attacking vikings with your parrot will never get old. Which reminds me, let’s check on how Muffins is doing. 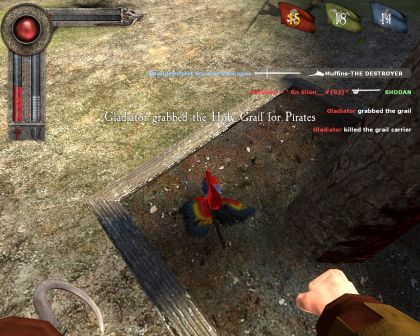 You can check out the PVK website here. This mod is avaliable on Steam in the Tools tab.

Where can the series go after the third installment?