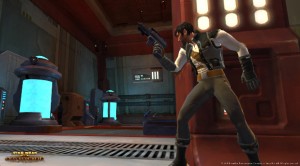 Electronic Arts confirmed that The Old Republic won’t be released until the 2012 fiscal year.

Well, it turns out that The Old Republic is impressive—most impressive—but it’s not a Jedi yet. The MMO set in Bioware’s Knights of the Old Republic universe has been delayed until some time in the 2012 fiscal year.

At the recent Credit Suisse 2010 Technology Conference, EA CFO Eric Brown told press that the official target date is sometime in EA’s 2012 fiscal year. That sounds like a long time away, but in reality it means sometime from April 2011 onward. It still sucks, though, because in January, EA already announced that the game was delayed till spring 2011. Though, as the game is the most expensive thing that EA has ever made, I don’t blame them for taking their time.

The comparisons with WoW have been so numerous that it’s practically Bioware’s destiny to tangle with the wildly successful MMO. Considering that World of Warcraft has had years to add content and perfect itself, it’s pretty damn hard for any upstart MMO to compete on the same level; it’s like trying to attack a fully grown lion with a celery stick. Nevertheless, considering the game’s rumored production cost of 300 million, EA isn’t going to release it until it’s able to at least make its money back.

In light of the recent "Gamer Dies of Xbox/DVT" news story, I have had a lot of questions from people (one person) asking me for tips on how to construct a Gaming Nest™ that is both comfortable and