A long time ago, in a galaxy far, far away…

OK, maybe not far, far away, because it’s exactly like this one. I think it’s in New Jersey somewhere. You know what? Screw it. You all know what Portal is. How couldn’t you? It was voted our favorite game of all time, and it was also heralded as the greatest game ever made, as if it came with a free phone call to God. I’m not going to dance around the issue like a bunch of grizzly bears after finding Red Riding Hood’s bloated corpse: If you don’t know what Portal is, stop what you’re doing right now and just go play it. Yes. Right now. OK, after you’re done checking Facebook. Fine, after you walk the dog, but right after that, play the damn game.

So, for those of you who haven’t been enlightened: In Portal 2, you return as everyone’s favorite Latino mute orange jumpsuit-wearing protagonist, Chell, after being in cryogenic stasis for a long time after Portal 1 (an exact date is never given, but when the computer repeats “9-9-9-9-9-9-9” when talking about years, suffice it to say you’ve missed a few birthdays). You are awoken by a bumbling rogue personality sphere named Wheatly, who wants you to find the portal gun and help him escape Aperture Science laboratories. This eventually leads to GLaDOS being re-awoken by flipping on a bunch of switches (this somehow brings her back to life despite being at ground zero of a catastrophic system failiure and explosion, but whatever) and she decides that the best way to exact revenge is to plop you back into the testing chambers. But this time, GLaDOS is out for blood. 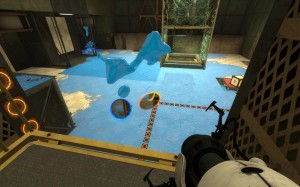 Oh yeah, she remembers that time you killed her like it just happened yesterday (which it sort of did for her, being recently dead and all). Her dialogue is like a combination of a physics professor, a computer, and the world’s most passive-aggressive housewife. She insults Chell at every twist and turn, but she does it in such a roundabout and off-tone way that you can’t help but laugh. And the best part is that she’s not the only funny character there. I’m not going to spoil it, but suffice it to say that GLaDOS is just the appetizer in the main course of hilarity.

Well, there’s no funny way to say this: Portal 2 is better-written and funnier than the original. No lie. I remember playing through the original and chuckling through the cake references and the overtly robotic tone GLaDOS took with regular human problems, but in this game I was laughing uproariously at every little quip. I was actually looking forward to the dialogue more than the puzzles, and, in fact, that’s what kept me going through the harder puzzles, knowing that either GLaDOS or somebody else would be waiting on the other side to make a snide joke at my expense.

Portal‘s gameplay can be explained by asking one question: How many times can you give the middle finger to gravity? The answer: However many times you want. Placing and jumping between the two portals is still the main part of the game, with players having to combine their ingenuity with physics to get from point A to point B. This might sound boring to anybody who hasn’t played it, but let me tell you, falling down three stories to use the momentum to portal jump and fly happily through the air like a mute female Superman is more fun than any shooter I’ve ever played. It’s challenging, while still being fun enough so it’s accessible to anybody.

But for the experienced portal jumper, there are several new toys to play with, such as shimmering walls of light that you can redirect as walkways or shields, disintegration lasers, “faith plates” (or as I like to call them: Tony Hawk plates), as well as several different colors of scientific goop that can make you bounce, run faster, and place portals on any surface. All of these items work together to make the tests both interesting and challenging; I imagine if these products were on the market, it would make a prison break look like a Bugs Bunny cartoon. Honestly, science has never been this much fun since grade five, when I tested the effects of fire on a thermal nuclear reactor. Incidentally, I live in Saskatchewan now. 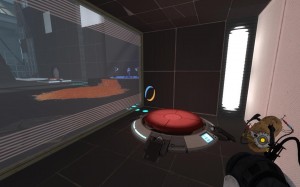 OK, I know how bad this looks. I’m gushing over the game like it was a high school football captain that just asked me out to the prom—but I’m not ready to put out till I’m married, dammit! The game is very well designed, from the environments, to the characters, to the sound design; but it’s not all great. In fact, there are quite a few things that bother me.

To players of the first game, the first few levels are a joke, and the punchline is that they’re almost exactly the same puzzles you did before! I’m serious, they’re copy/pasted from the first game, and after that they’re still relatively easy when compared to Portal 1. Yes, we know about momentum. That’s great Valve; I think every grade school-er in the country could do these. The game just isn’t challenging; once you get the hang of portal jumping, most of the puzzles can be practically breezed through, even with the new gadgets. It’s a good thing that there’s going to be a challenge mode released, cause otherwise I’m going to be left with a serious case of puzzle blue balls.

Oh, and the game is short. Just like that sentence. While it’s good that the game never overstayed its welcome, even with the fantastic co-op mode, it barely is enough for its $50 price tag. Maybe this could have been saved up for The Orange Box 3 or something. Speaking of that, what happened to the whole thing about Portal‘s universe and Half-Life‘s universe being connected? Where did that plot line go?

OK, the last problem is a little odd to talk about, so whether or not this is something that should be mentioned, I’m not sure. Here’s the thing: I really loved Portal 1, mostly because that while it was funny, it was dark. You had to laugh, to escape the niggling fear in your mind that you are this crazy AI’s little toy monkey, and it couldn’t care less about your well being. The hidden messages you found off the beaten path were from other kindred spirits, warning you that GLaDOS was going to barbeque your ass. But the new support characters completely subvert that, taking the game from unnerving dark humor to clean pristine “wacky” humor that, while delivering the same laughs, just seems to exist more to create Internet memes than to actually deliver an artistic product. It all strikes me as very cynical; it sounds like Eric Wowpow didn’t think that lightning could strike twice, so they opted to go for the more general humor rather than the atmosphere of the first game. I think this is a discussion for another day, however. 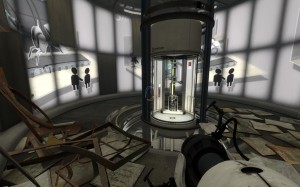 In spite of all this, I’m going to say what we’re all thinking: Portal 2 is the most fun you can have on your PC till someone invents a way that it can transform into a laser-firing sexbot with Bill Nye’s voice. The game is fun, the characters are still great, and overall Valve did try their best in bringing Portal to the AAA market. While it has some flaws, it’s still a testament to the level of artistic direction games need.

Having said that, I think it’s time that we all agree that the next time someone shouts “the cake is a lie,” we need to punch them in the kidney. It’s the only way they’ll learn.

Seriously, it’s not funny anymore. Stop it. Also, if someone shouts “Science!” as a response to something stupid, punch them in the kidney, too. Actually, people who like Jersey Shore, Call of Duty: Black Ops, or anybody named Paul all deserve a punch in the kidney. I don’t know why I’d punch the last group of people; at this point I’m pretty sure I’d have gone mad with power.

Incidentally, if anybody knows Stephen Harper, punch him in the kidney, too. Why? Cause I’m pretty sure you’d hurt your hand, as he is an android. Prove me wrong.

Welcome to Pimp My 'Cola, the article that brings you up to date on all of GameCola's most recent advertising adventures. Long-time GameCola fans will remember that this column was written by our PR M