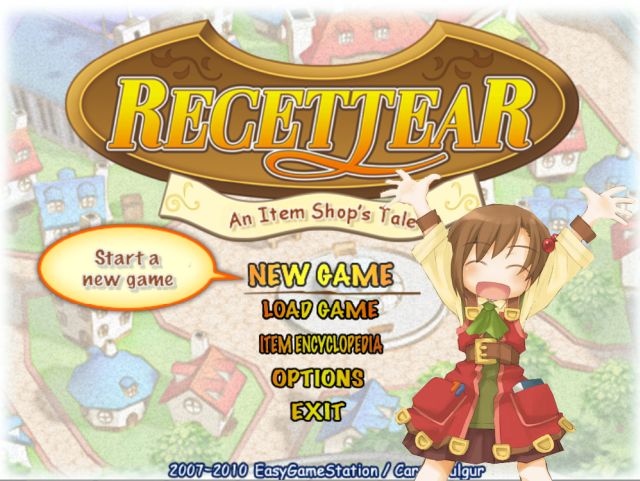 In a time when we need–WAIT WAIT COME BACK! Come back! I know the title screen looks like a cutesy soft “watashiwa desu KAWAII ^_^”. I know that. But it’s not as bad as you think, all right? Looks can be deceiving.

The game is actually about a little girl who decides to run an item shop when her–WAIT WAIT COME BACK! It’s good, really!

Recettear: An Item Shop’s Tale is an RPG dungeon crawler mixed with a business management game, which was developed by EasyGameStation and translated into English by two guys from the Something Awful forums. I know what you’re thinking: “Aren’t business games for those weird people who get off on train simulators?” Well, yes, but Recettear is so well designed that even when you’re doing the business management stuff, it’s still really fun. When it first appeared on Steam, I thought the game would at least make its money back, but it wouldn’t be anything more than a niche game. But with a couple of indie game awards and about 100,000 copies sold, I got to eat humble pie with a side of depression.

Basically, Recettear is a game all about filthy capitalism, disguised as a Japanese romance anime. 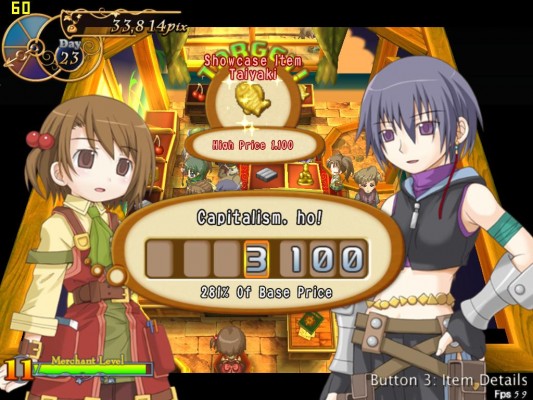 I actually got aroused when I saw how much money I could make selling tuna.

The story takes place in a medieval fantasy world, and stars Recette Lemongrass, the daughter of a shopkeeper who decides to leave to become an adventurer. He vanishes after slaying a dragon and saving the world, and a fairy named Tear informs Recette that her dad borrowed money from her company, apparently so much so that the game doesn’t even tell you the number. Now the debt falls to her. I guess he loves blackjack as much as he loves child abandonment. Luckily, Recette’s hometown is a hotspot for adventurers, so Tear helps her convert her house into a shop so she can over-charge people for a jug of milk and pay down the massive debt to avoid living in a cardboard box.

The story is surprisingly original—as is the whole feeling of the game. I just love the idea that you are the person who various poorly dressed anime characters visit to upgrade their weapons, and that you’re basically ripping them all off. Recette is essentially a high-functioning sociopath who’s almost always got a smile on her face and the IQ of a lemming after a frat-party, with Tear being the straight man (err, fairy) to the shopkeeper’s insanity. That’s where the game starts, but the characters actually have a surprising depth about them, and the developers are just as happy to poke fun at themselves as they do the Japanese RPG genre. It’s not amazing, but it’s pleasant and surprisingly funny, and very memorable. But we’ll come back to that in a bit.

The real star of the show is the gameplay. You have four “timeslots” for each day, and in each of those time slots you can go out to the town, go adventuring, or open the shop for business. You then proceed to put out your best items on display, and sell them to the suckers–I mean, patrons–for more than they’re worth. Capitalism! Sometimes customers bring in stuff to sell to you, in which case you offer them sub-market rates, and leave them to return to their families poor. Capitalism!

At the end of every week, Recette has to make a payment toward her debt, a price that is set by the business-savvy Tear. Each week you have to pay more toward the debt, so the game requires you to manage your time while making sure you’re getting the most money for your items. Unless you happen to find Elvis’s diamond-encrusted skull, you’ll almost always be panicking when payment day rolls around.

The store management gameplay is basically a battle between you and the customer. The old axiom is true: Buy low, sell high. The different characters/townsfolk don’t all want the same prices; some of them will not give two shits that you’re ripping them off, while others will grab at every damn cent they can get. Like those stupid little girls who keep coming in and won’t buy a candy apple unless it’s 10% under the cost it took to get it. Goddammit, go away you little shit! If you aren’t gonna pay what it costs, get out! GAAAHH! 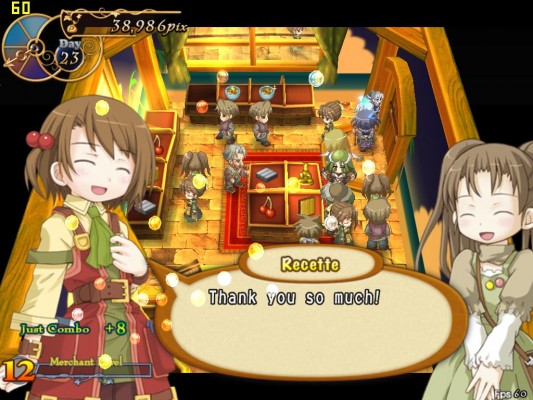 I hate this little girl so much, and you will too.

You’ll soon realize that just buying things from others shops and then selling them doesn’t cut it. That’s where the dungeon crawling comes in.

You pay some poor sap to go down into the dungeons with you, fighting and killing all the dangerous creatures down there, while you make money hand over fist selling whatever you find. It plays out in a top-down isometric view, where you level up to increase your adventurers’ stats and learn new special attacks. It works well enough, but some heroes are just way more useful than others. The main one, Leo, can wear heavy armor, block some projectile attacks, has a huge hit range, and has the most usable special attacks in the game. The next character you get is a thief who can do none of those things, and she starts off about four levels below your first guy. Oh, and she can run. Woo. The other guy you get is a dude who just punches stuff, and since touching the enemies causes you damage, he’s not very useful when you have to get within sneezing distance of a giant blue hell-knight that can fuck your shit up.

But despite that, the RPG elements are nice and fun, and the dungeons are varied enough to keep things fresh. Managing your store requires both luck and business savvy, and the game is just so well designed that it never feels like busywork. Here’s a tip: keep your stock as varied as possible. You never know when that stupid box of wool hats you bought will suddenly be in demand, which means you can sell them for almost the same price as a nuke with a free Robert DeNiro attachment. For a kawaii nightmare, the game is unforgiving.

OK, so after that half a page where I basically married Recettear, let’s get to why this marriage would become a sexless husk of depression. Or rather, let’s get to what I don’t like about the game, if you hate really weird metaphors.

The stench of an indie game is ever-present, as there are a lot of cut corners in the art. The environments are all in cartoony 3D while all the character and more complicated models are 2D manga sprites, with maybe three frames of animation. The characters end up looking like someone is doing a felt puppet show in front of a screening of Avatar, but I suppose it gets the job done. It’s not like I’m expecting top-notch quality; it just bothers me. Also, all of the cutscenes are basically two character portraits looking at each other, with the background being a stock drawing from the concept art. Again, I’m not expecting Final Fantasy quality graphics, but at least give me some kind of opening animated cutscene, guys. The biggest animation they have is when Recette is building the sign for the store. Not exactly pulse-pounding action. 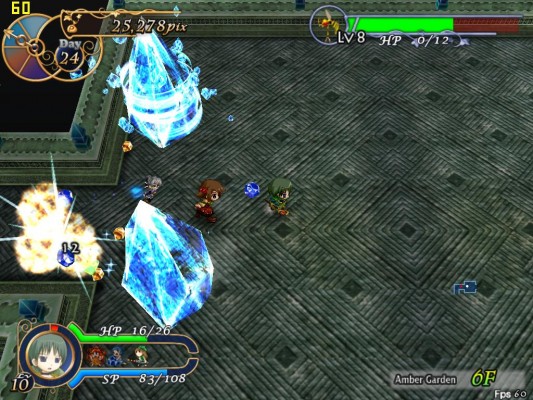 FEAR THE POWER OF MY HUGE EYES!

While I praised the humor before, it’s not exactly an easy sell. There are a few funny moments, and the whole concept itself lends some humor, but it has the problem that other Japanese games have: Japanese games tell you what the joke is and why it’s funny. I don’t know why this is so common; maybe Japanese anime writers are self-conscious and just want us to laugh with them. It stops being funny and becomes a stale Will and Grace rip-off at times. Each joke ends with Tear scoffing at a character’s stupidity like a disappointing mother, or with Recette making a funny face while a sweat drop pours from her. The game doesn’t need this. The jokes work on their own.

The story basically becomes non-existent for a long while, where there is no other huge world-changing goal other than making lots of money. The dungeons provide a bit of a break, but eventually the whole positive mood of the game just becomes monotonous, where nothing really happens for a long time.

In the end though, I couldn’t help but be drawn in to Recettear. It’s fun, it’s well-designed, and whether the “lolita” art style puts you off or not, you’re still getting a great game for a very low price. Try out the demo on Steam before you get it, and just make sure to keep your customers happy. Then buy their priceless family heirlooms and sell them back at triple the price to buy a new Cadillac, thereby destroying the local economy and sending the town into a financial pit. CAPITALISM HO!

This month in Link's Burden, Link comes across a bombastic opportunity.  Namely, a quick gander at Atlus's recent addition to the gaming world Izuna: Legend of the Unemployed Ninja for Nintendo's DS.