At this point in my prematurely far-flung career as a pseudo-journalist in an industry filled and overflowing with proto-journalists, I start to wonder exactly where my loyalties have driven me to lie. Journalism was once a position held by literary human rights advocates with their pen as their bullhorn and truth as their sermon as they unraveled the mysteries of how the upper class were crushing the lower class, how politics were really operating behind closed doors, and how the future is truly in our hands. Now it’s a position for the fatass, hairy man-children who can bitch the longest and the loudest between cans of Rockstar, Japanese quasi-cuisine, and gulps of air that could’ve gone to a drowning child or a choking beloved elder.

Videogames are art, but calling this line of work “journalism” only used to be true, because the journalists now can barely appreciate art. Gamers themselves are to blame, because every writer worth his toilet paper diploma in English knows you gotta use the language of the reader to make the connection. That means throwing out $60,000 worth of education to write a review that makes your readers think “Wow, IGN is hiring 12 year olds with ADD and IBS? That’s so progressive of them!” Outsiders who are not “privileged” to ever become one of these sages take to YouTube to make themselves screaming caricatures with celebrity grades so low Kevin Federline with weights his on ankles couldn’t sink to them. 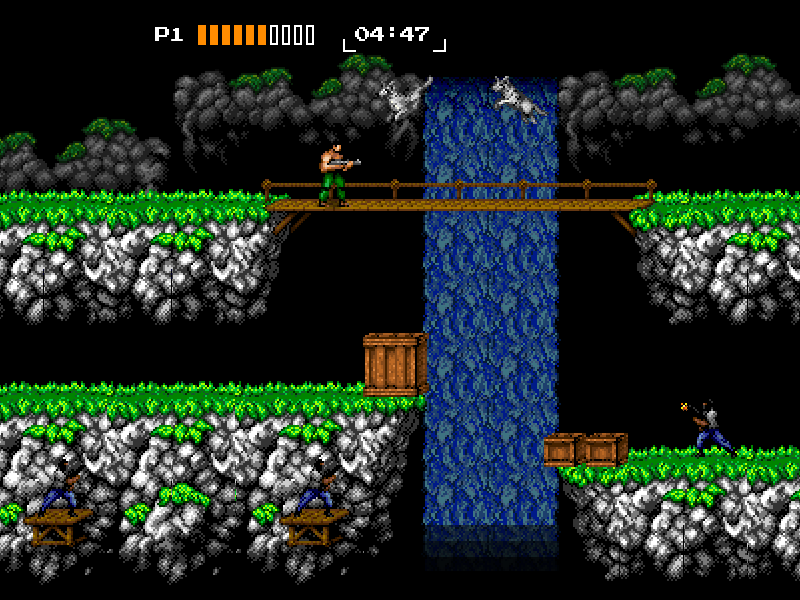 My days of reviewing full-time are pretty much over, I feel. I just don’t have time to do it like I used to anymore. I have a FFV review on my laptop that’s been there since January. I had to pass on a puzzle game and I almost missed out on this one. I’m kinda glad I didn’t.

8-Bit Commando is a game I’m glad I poked my head out of my hermit shithole to look at, not because the game itself is amazing, but because it shows something my red, shaven cynical ass rarely sees—improvement. The last time I played a game by Ivan, whose last name escapes me now, was some years ago with Chains. Chains had potential, but was bland and overpriced. It had something to it, but not enough to justify $15 to purchase. It does me good in my “career” as a pee-sy-journalist to see at least one person actually paid attention to what I had to say, because it looks like Ivan and his company really stepped up to deliver a game worth writing about.

Half a game, actually. Might even go so far as to say 1/3 because the game, like Chains, is pitifully short, even for 8-bit standards. This time it disappoints me instead of relieves as I play it to review because they nailed so much of the 8-bit experience, trimming quite a lot of fat to deliver platformer runnin’n’gunnin in a way 1988 would be proud of.

First thing is the graphics. Not true to 8-bit standards but still easily some of the best of that basic goal I’ve ever seen. Excellent animation and serious attention to detail really bring it life. The music is also pretty true to life, though I found the actual tunes ALMOST there; they were pretty forgettable but still serve their basic purpose well enough. Control was kinda floaty and I would’ve liked more options for aiming. I really liked that my USB controller was instantly recognized for play, and it felt right from the get-go. And this is probably the first and only time I will say this about a game—the mission complete screen kicked ass. 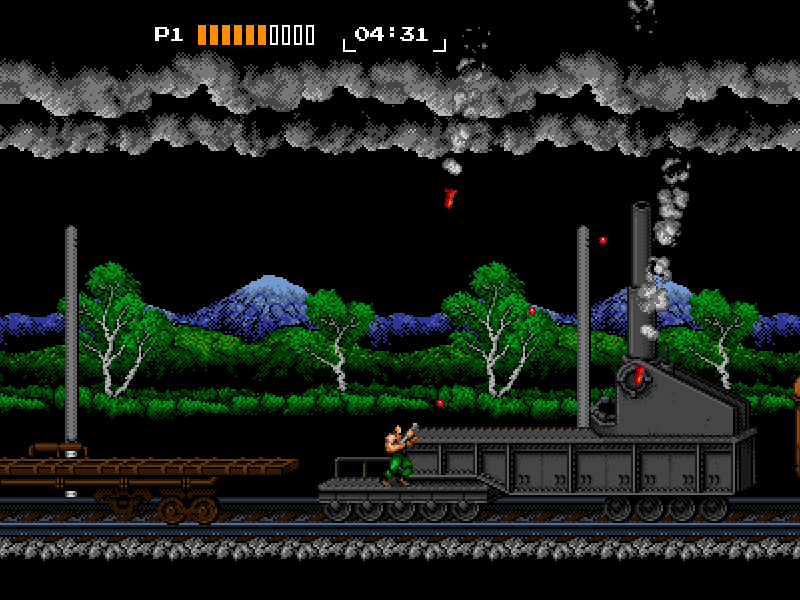 The game itself plays something like Journey to Silius and Metal Slug with a little bit of Battletoads thrown in. It’s run and gun. You run. Then you gun. Any questions? Get the fuck outta here. It’s pretty standard classic stuff. You are a random commando sent to retrieve uranium and stop a nuclear attack. If this were a 16-bit game, I’d have an issue with this, but this is 8-bit, so no one gives a shit. There are cute little cutscenes within the game as the enemies are just one step ahead of you with the uranium. I like that touch. You are required to jump 30 feet into the air and use a simple machine gun to rather easily shoot down large aircrafts, tanks and, later, an enemy ship. Sometimes you get health items, and once or twice a level you get a weapon upgrade to grenades, flames or homing rockets.

There are 7 levels. There should be 15. You will die a few times in each level, but thankfully it’s not so bullet-hell that you’ll ever be stuck permanently. Difficulty is pretty forgiving except for a near-excruciating though clever and almost well-executed bike level. You get as many lives as you want, but the clock at the top always keeps going. This is a clever but also frustrating mechanic, as I don’t like the idea that the run-through that might’ve been successful was stopped short not by my own failure, but because of the clock. This game seriously needs some power-ups that increase clock time.

Ultimately it should take you about 40 minutes to get through the game. Which is fine considering most NES games like this are about that length. The difference is that many places don’t charge $10 for it, and if they do, it’s because the title itself earned its rep through 20+ years of satisfied customers at a time when that shit was new. The biggest failing in this game is not only the fact that it might barely last you an hour (and does not offer passwords or saves), but that it tells you UP-FRONT it’s a short game, as you get to see the levels from the start. This wouldn’t be so bad except that the game, while well executed and tightly programmed, is still just OK. It starts getting awesome around the bike level, but then there’s just one more level after that. You fight a lame boss and then… THAT’S IT. Weak. If anything was poorly executed in this game, it’s that. The levels preceding are pretty good and genuinely build up to something that never happens. The level dynamics only really change once, and that’s the bike level. The dynamic stays firmly at 7.5/10 territory. 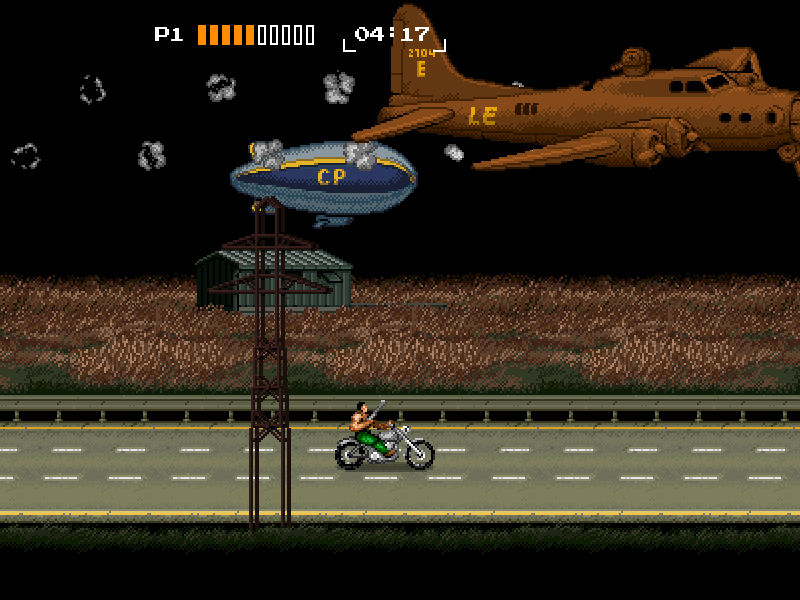 But I’ll tell you what, since I’m barely a videogame journalist anymore and therefore no longer a tightly wound asshole (imagine that literally for a moment and you’ll get a good idea of whatever the hell my mind is doing right now), I’ll round it up to 8. [Also, our ratings system doesn’t allow for decimals. – Ed.] I wouldn’t give this to an NES game because it’s fixed whereas something like this CAN be added onto later. This game really shows a lot of potential that COULD be tapped. Ivan, buddy, if you’re listening, here are my recommendations:

1. Add at least eight more levels that change up the dynamics. The bike level was a good start. Take a look at Castlevania: The Adventure ReBirth (which I should be reviewing, actually) and Ninja Spirit for some ideas.

2. Time bonuses or something. I don’t have six seconds to jump over a crumbled bridge and kill a tank with a rifle.

3. More health items in later levels. That bike level was like showering in prison.

4. The fire barrels don’t kill anyone.

5. More planes flying from the background fore. That was AWESOME. Actually no, you might overdo it.

7. Hire me to do music for your next game.

8. Give us a real last boss. C’mon, having a blinking dot that’s slightly harder to hit than the last blinking dots does not qualify as a climactic ending.

Man, this review took me four hours to write. I wish I had time to go further on, but the 8/10 should satisfy. It’s a good game with some good potential that’s just a bit too expensive for being half a game. It’s a good half, but it’s still half, and against other 8-bit games that seriously go for awesome, this game would have some tough competition.