It is very difficult to disguise garbage as something worthwhile. That is, unless a bunch of experts gather together and proclaim that the old boot covered in tomato sauce is actually art that symbolizes the eternal struggle between man and tightly closed condiment jars. And thus, with the public being fairly trusting of those with credentials, absolute rubbish is now free to sneak itself into the homes of perfectly good, hardworking people, and collapse in a drunken mess in their bathtub. Games are similar, and when review scores are high enough, people rush out and purchase a game that is better used as a coaster than an actual source of entertainment. But no longer. It is my oath to you to warn you and protect you from bad games that somehow have gotten the reputation of being good. From now on, you no longer need fear…games that secretly suck. 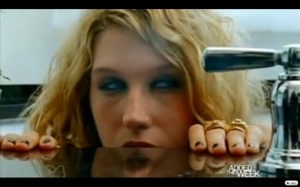 “Uh…I can’t get your bathtub to flush.”

To kick off my witch hunt, I’m going to start with a game that desperately tried to ruin my childhood: PaRappa the Rapper. I’ll try to give you a summary of the story in the game, but if I break off mid-sentence, it’s because my fingers became too embarrassed at what they were typing, balled themselves up into fists, and began smashing the keyboard in protest. You play as Parappa, a dog that looks like he’s about eight and has dreams of becoming a rapper and wooing a flower by the name of Sunny Funny. While you would assume Parappa should at least aim for someone in his species (or that at least doesn’t die during the first snowfall), Sunny is a biped that looks more like a little girl with some sort of disfiguring facial disease than an actual flower. Unfortunately, another dog by the name of Joe Chin also seems smitten. He serves as the antagonist of the game, and looks like he’s twenty-six and has enough money to make all of Parappa’s attempts at wooing Sunny seem quaint by comparison. Parappa encounters a variety of obstacles in his efforts to woo Sunny and he must overcome each of them.

By believing in himself.

And if that summary seems like one of the dumbest things you’ve ever heard, rest assured you’re not alone. But hold on, let me back up a bit. Remember when I said that Parappa and Sunny both look like they’re little kids? And Joe Chin looks like he’s twenty-six? While the developers of the game might not have seen anything wrong with this, both myself and the FBI probably have a decidedly different take on the matter. Sunny seems mostly uninterested in him, but he is obviously up to something more devious, and you have to watch throughout the entire game while he makes sweet treats for Sunny and tries to lure her inside of his car, shown here. 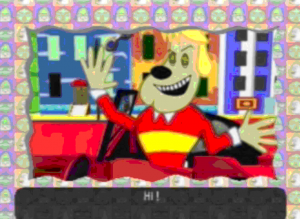 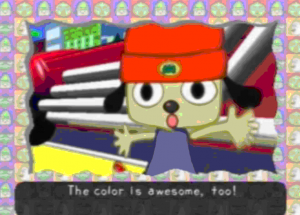 Note that Joe is like three feet taller than Parappa in those two shots, so either he is much older or Parappa is a dwarf. But, I mean, it could be worse; his car at least has windows, and— 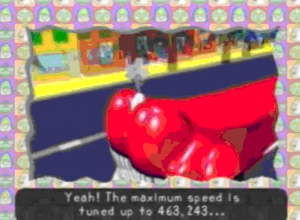 …oh wait, he’s driving a giant red penis. Great. I’m not completely sure what that is, but it looks like parts of Clifford the big red dog have been repurposed as an automobile. I’m assuming the rap where Parappa mourns finding Sunny’s freshly plucked body at the bottom of the lake was just cut from the final version of the game, because I can see no other way that this could logically end. You think somewhere along the way, someone on the development staff might have suggested they at least make Parappa’s rival in love at least look roughly around his age, but whoever did this was most likely kicked off the programming team and out of the white windowless van they were most likely using as an office. 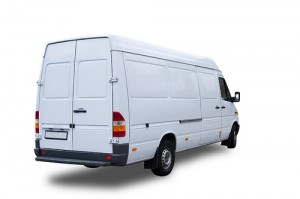 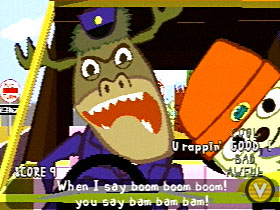 Normally, a story this bad would leave me rushing to get to the gameplay segments, but in an effort to make things consistent, these were terribly done as well. The game features a total of six songs, which would be the equivalent of a musical stopping about halfway through the first act because they ran out of ideas. The songs are all original and typically relate to some fairly mundane task like taking your driving test or waiting in line to go to the bathroom (because whenever I need to take a nice bowel movement, I feel the urge to rap).

One of the main problems with all of the songs is that they feature a teacher whose lyrics you follow and ape back at them after they rap it. Songs don’t sound good when someone is just aping back lyrics, something most of us learned after we passed the age that Row, Row, Row Your Boat had any appeal. Parappa’s disjointed voice doesn’t help, as he’s cued to rap only when you press the corresponding buttons. However, even if you do everything right Parappa still sounds like a robot that just had some pretty severe surgery and is on some sort of unusually strong medication. He delivers the lines like William Shatner, where all of the pauses seem unnatural. And even if these things were fixed, it doesn’t help the fact that the songs themselves are just awful. Here are some actual lyrics from one of the songs:

I am a chicken/

And I ain’t kidding/

Although nothing is written

In terms of actual gameplay, there is a bar that scrolls along at the top and indicates when you are supposed to press the corresponding button. This concept seems simple enough, but PaRappa the Rapper takes an innovative approach to the idea by making the prompts correspond to absolutely nothing. Press everything like you’re told, exactly as shown, and you’re almost certain to fail a song. It would be like taking a test, getting all the questions right, but still failing because your teacher had taken points off for not answering the invisible pretend questions that were all in their head. 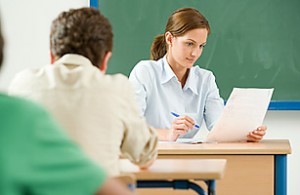 Looks like they forgot to carry the glorble to the flaffy-dilly. C-minus.

Now, I’ve actually heard several defenders of the game point out that you need to press the buttons in time with the rhythm and ignore the bar, which is better for a rhythm game. And I would point out that this is incredibly dumb, because then they should have either abandoned the bar or—and I might be asking for too much here—fix the stupid bar so that the prompts correspond to when you’re supposed to press it in the first place. Guitar Hero doesn’t force you to strum when there is no prompt or take off points just because it feels like it, and that’s because Guitar Hero is a good game.

The rotten cherry on this sundae of garbage is that at times I have the feeling it is being deliberately annoying. During the loading screens, the game utilizes some of the most annoying sound effects to ever be featured in a videogame. Well, technically it’s just one sound effect repeated endlessly, and it most closely resembles the noises you’d hear if someone mistook a duck for a bagpipe and tried to play it. Additionally, the ranking and scoring system is not really explained, and if I was being generous I would describe it as arbitrary. You might be doing fine for most of the song, consistently getting “good” rankings, and one mistake will send you down to poor and cause you to fail the level. Going up a rank seems much more difficult to do than going down one, and the frustration is compounded by the arbitrary nature of the button presses.

So, there you have it: PaRappa the Rapper is one of the worst games you can find for your PSP or Playstation. It is a rhythm game that didn’t bother to align the button presses with the rhythm—and punishes you for it. It is a musical game that doesn’t have any worthwhile songs in it. For musical or rhythm games, these are pretty huge problems. Those alone would be enough to sink it, but combine it with an awful, cheesy story featuring bland and obnoxious characters, and cram it so full of other annoyances and I just can’t fathom how this game was ever as well received as it once was. There are a couple catchy parts in a couple of songs, and I guess if that is all you’re looking for and want to waste $30, then PaRappa the Rapper might be right up your alley…which is perfect, because down some dark, grimy alley in a trash bin full of medical waste is exactly where this game deserves to be.