When I was first given this assignment, I had to admit I was intrigued and more than a little excited. A game with elements of both Hatoful Boyfriend and Zero Escape? It admittedly sounds too good to be true. So I was also more than a little skeptical. But let me be honest…this game blew me away. 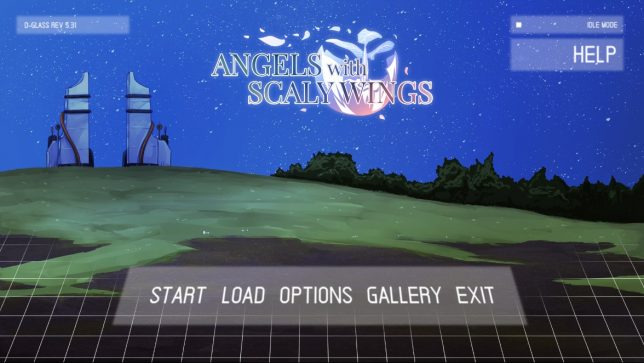 Angels with Scaly Wings tells the story of a portal that connects to another world filled with an intelligent race of dragons. You, as an ambassador from humanity, are the second person sent through this portal, tasked with trading a PDA filled with centuries of human knowledge for a number of the dragons’ generators—a completely clean energy source that the human world desperately needs. The first human sent through the portal, Reza, is a guy you briefly met in school, but immediately pulls you aside upon your arrival to tell you that something seems off about this world; there may be something going on under the surface that we just can’t see. 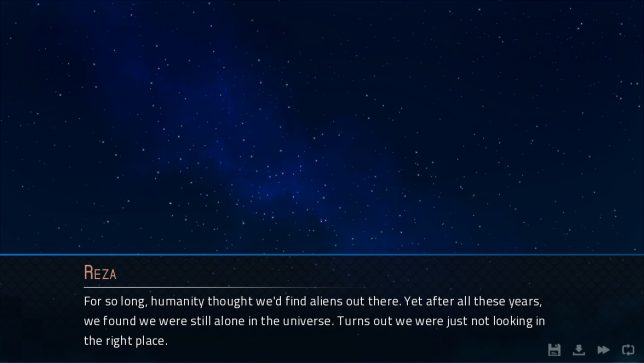 When meeting at the portal that night, Reza is about to tell you what’s really going on here when BAM! His dragon escort intervenes and tail slaps you in the gut (#rude), Reza escapes, and no one is happy. As the days pass, dragons begin to show up dead, Reza is still missing, and generators are being stolen from all over the village. But is Reza really the one behind all of this? Or is someone else pulling the strings? Where did he go? And will we ever find out what may or may not be going on behind the scenes of this idyllic dragon village? After my first playthrough, I will admit, I only know some of these answers. But I can’t wait to find out the rest.

The gameplay is similar to Hatoful Boyfriend and other visual novels of the same type: reading dialogue and making choices to continue the story in one direction or another. I do feel that Angels with Scaly Wings gives you more fun options that lead to small achievements (there are 63 in total). For example… 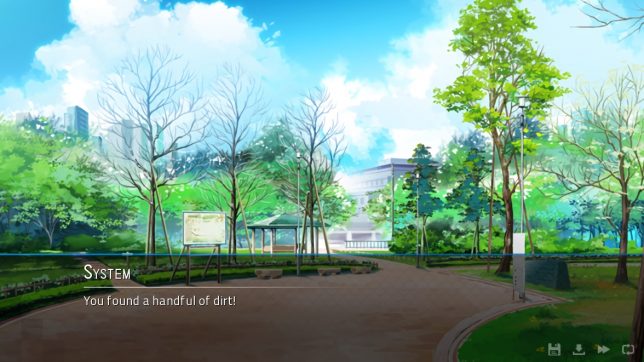 I never did find a use for it though. 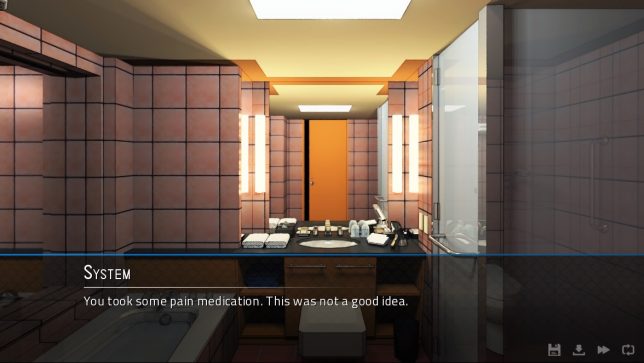 In addition to interacting with the environment, the player can also talk with the various dragons that they meet. There are five main and five secondary characters to interact with, and each dialogue option will point you along a path, romantic or otherwise. I found all of the dialogue fun and interesting, and it was very easy (for the most part) to know which characters a choice would result in. The implementation of a quick save feature helped with that as well—if a player isn’t sure they’ll be happy with a choice, they can quick save and jump backward to see if there was a better option. There were many hilarious interactions like the one below, which is indicative of the different routes the player can choose. It can be as romantic or informational as you make it, which is an excellent decision. 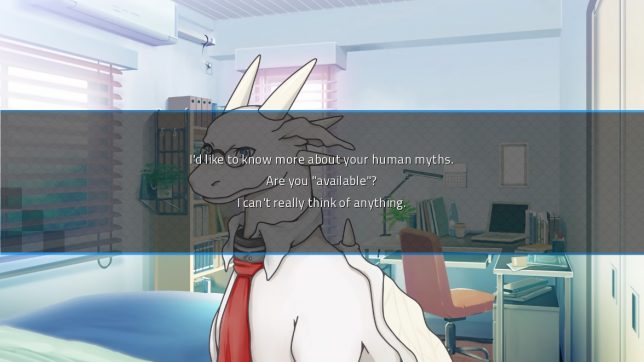 Don’t even get me started on our date.

Aside from the dialogue choices, the game also has a number of puzzles. I will admit, the beginning of the game started slow, as is the case with most visual novels. There’s a lot of exposition to get through and everything tends to be a bit wordy. Then the game did this… 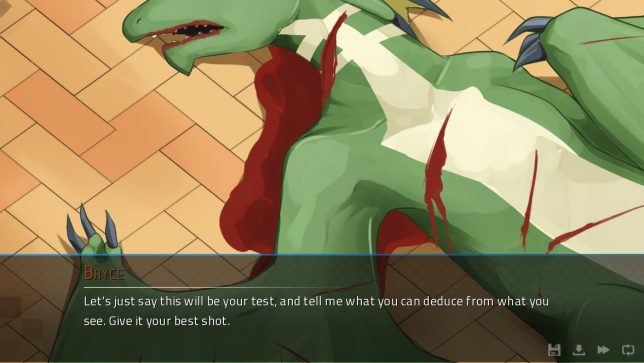 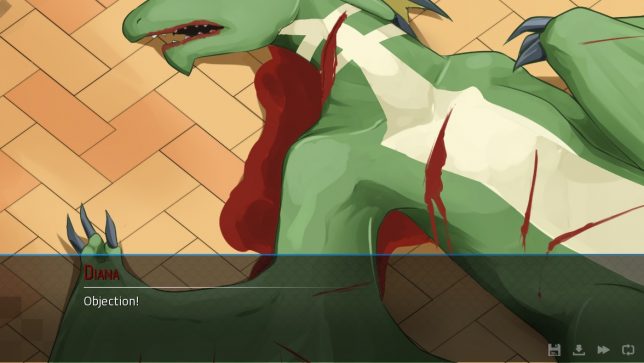 …and it hooked me. Give a fangirl a little Ace Attorney, even if it wasn’t exactly intentional (?) and I am so down.

But in all seriousness, after this point, the story picks up and the player feels more in control of their destiny. Choices actually have tangible outcomes and the player can’t physically choose everything on one playthrough, increasing replayability for sure. (And with an emphasized skip feature, replaying is feasible as well.) There are over thirteen endings, and the player is encouraged to use their knowledge from past endings to unlock new options in a new playthrough, similar to the Zero Escape series. I got the neutral ending on my playthrough, which seemed to be a good place to start. I learned so much, but I can tell that I don’t know the full story yet, and that’s something that will keep a player like me coming back for more.

Now let’s talk about the characters! There are four main (presumably romanceable) characters, each with their own quirks and stories to tell. The game does a great job of allowing the player to interact with each of the characters before choosing who to focus on, although there is a limited amount of time to pick a favorite. I found these amazing bios on the Angels with Scaly Wings website, which tell more than I ever could! So I’ll just give you my impressions of the main characters as best I can while you get a taste of their personality. 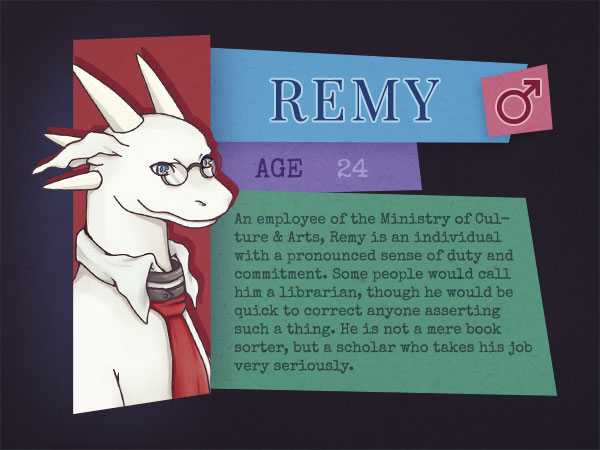 Remy is absolutely adorable and I love him. He’s a sweetheart and I just want to protect him. Although his puzzle for me did remind me too much of my worst section on the LSAT. 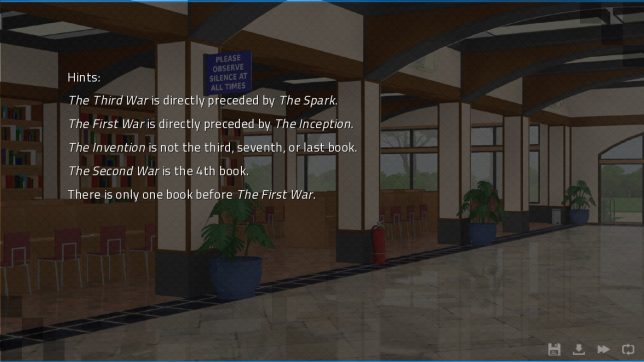 But I will say, I did get it first try. Thanks LSAT prep books. 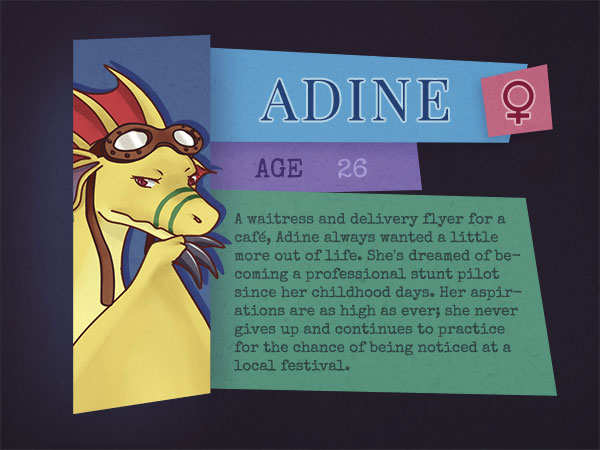 Will admit, I didn’t see much of Adine in the pathway I chose. I am looking forward to getting to learn more about her, as I can tell based on the interactions we DID have that there’s more to her than meets the eye. 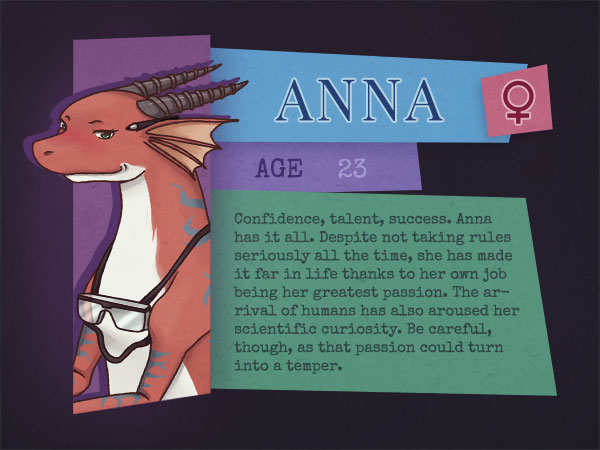 Anna and I had some great times for sure. I even ended up winning a date with her! Never followed up on that—but hey, she won’t hold that against me, right? …I hope not. 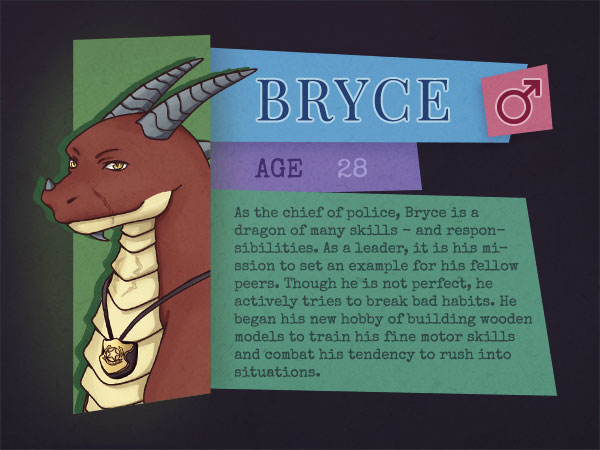 Bryce was an absolute blessing; and honestly, he’ll probably be the first I go for when I actually go for romance pathways. I mean, who else can say they had a drinking contest with a dragon, let alone the chief of police? 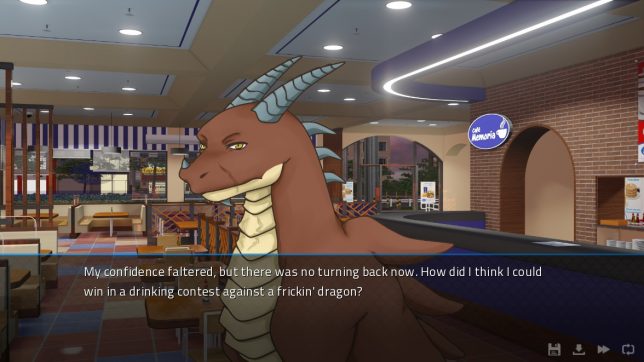 Onto smaller things. I loved the soundtrack for the game—it was ambient for the most part, and fit into all the environments nicely. The writing was also excellent. It was very witty and each character had their own distinctive voice, something that is very important in a good visual novel, given the sheer amount of text. 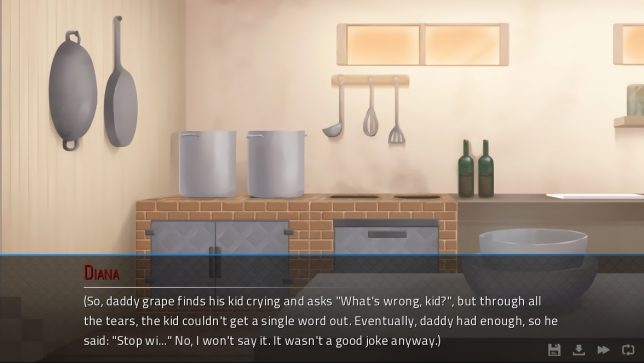 Something that I will point out is occasionally, I found the art style of the backgrounds jarred a bit with the art style of the dragons. This may have to do with multiple artists being on the project and I did get adjusted to it over time, but when first beginning the game, it’s something that I was concerned about. It isn’t enough to remove the player from the experience, but it was a little jarring when first starting out.

Another aspect of the game worth pointing out is the sheer amount of information and lore it contains. That being said, the player kind of has to be down for that sort of thing to really enjoy some parts of the game. The main character is a double major in biology and sociology, so there are some fairly lengthy discussions about those topics—the evolution of the dragon species and their folklore and myths regarding humans are two topics that immediately come to mind. Fine for me, because I’m a sociology major and incredibly interested in that kind of thing (if the developer ever wants to come talk culture theory, hit me up), but if the player is not interested in whatever the characters are talking about, I can see Ipsum’s discussion of multiple universes getting somewhat tedious (serious Zero Escape vibes there, bro). Definitely something to keep in mind if someone is looking to pick up this game.

Of course, and given the amount of times I’ve referenced Hatoful Boyfriend in this article I probably shouldn’t have to say this, the player has to be prepared for the craziness that comes from actively romantically pursuing non-human creatures. If the player can’t suspend their disbelief, maybe the romantic options aren’t for them, but the rest of the story sure can be. The route that I followed didn’t have all that much romance; I wanted to have a common route for a baseline before jumping into the wacky stuff headfirst (which you all know I’m no stranger to). Allowing the player to choose whether they want romance or just an intriguing sci-fi story is great, and I really appreciated that. Of course, the romance is never fully escapable, but I have no qualms with that.

Overall, I absolutely loved Angels with Scaly Wings. The story was compelling, the world was incredibly well-developed and immersive, the characters were fun and unique, and with many different endings, I can see hours of my life being poured into this game trying to uncover every little interaction it has to offer me. If you are a fan of Hatoful Boyfriend and are looking for your next crazy dating sim with a surprisingly deep story, look no further. This will be your game, right here.

I will conclude my review of Angels with Scaly Wings with this staggering list of the romance options I had by the end of my first run, which is stunningly similar to my list in real life. 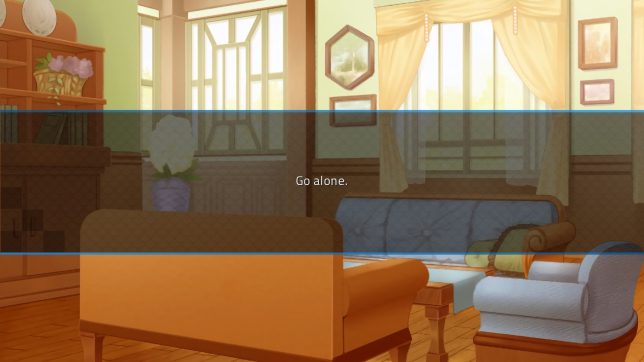 First, I'd like to start off with a "mission statement" of sorts so everyone can get the idea behind this new column of mine. Back in the day, it was very common for videogames to have horrendous cove