Well, a wrestling game. Before I begin this review, let me warn you that I am not a fan of wrestling. This review is actually a sick form of punishment given to me by the GC Editor in Chief (slave master, tyrant, dictator, etc.) for not having a review ready for last month’s issue. So, I popped this baby into my Game Boy. I was greeted with some rockin’, tacky wrestling metal. Deciding an exhibition battle was right for me, I chose the noble Bret Hart. My thirst for blood rose as I discovered that Hulk Hogan was my worthy opponent. So, I hopped in to the ring with this hulking maniac. You could feel the excitement in the air, my eyes dilating as I waited for the match to begin. 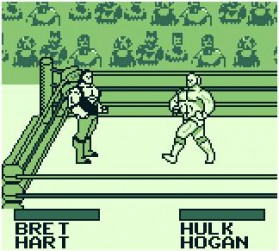 But the near-erotic thrill ended there as I quickly discovered that there are approximately three ways of inflicting pain upon your opponent. There is the punch, the kick, and of course, the grapple, which gives you the option of throwing your enemy to the ground or kicking him some more. Enthralling. Despite there being several modes of play, such as the King of the Ring, all are basically the same, consisting of punching and kicking your foe until his life bar becomes low enough for you to pin him.

Characters include the famous Bret “Hit Man” Hart™, The Narcissist Lex Luger, Shawn Michaels, Mr. Perfect, Razor Ramon, Macho Man Randy Savage, Yokozuna, and Hulk Hogan. There is also a mildly tender create-a-character option that lets you customize the name, speed, stamina, and strength of your wrestler. The major downfall of this feature is the fact that your characters looks are permanent, leaving you with a scantily clad beauty with long, flowing locks of hair.

Unfortunately, I haven’t played enough wrestling games to know how well this one compares to its competitors. If you’re a fan of punching, kicking, and men in tights and Speedos, this game just might be the game for you.