So it’s about 3:30 a.m. right now, the night of the deadline. I’m missing a few key staff votes, but tough—they’re just gonna have to wait until next year. GameCola waits for no one; and, quite frankly, it is quite definitely time for you to find out what games won our fabulous awards this year.

It’s a big enough feat to make a Star Wars game that’s actually more fun than a pile of rancor dung; but for a developer to combine that with a Lego game that’s more entertaining than a pile of chewed up bricks is just about unbelievable. Lego Star Wars has the humor, charm, ease of playability and replay value that just about every licensed game ever lacks, and it puts both of its licenses to phenomenal use. 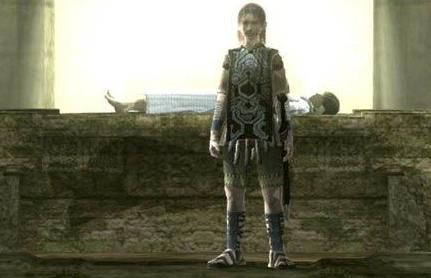 Taking home the gold in a year so dry of fresh blood that something called “Finny the Fish” squirmed his way onto the ballot may not seem like an accomplishment; but Wander, with his girlish jump and his overall high amount of pansitude, could be a contender to our hearts any year.

Though its soundtrack isn’t nearly as brilliant as that of its predecessor (it’s hard to beat “I’m so in love with you/I want to wad you up into my life”), We Love Katamari builds on Katamari Damacy in every other way you’d want it to. The game features new objectives, new environments, a plethora of new characters, insight into one of the principle characters’ past, and a multiplayer mode that, while disappointing, is still a step up from that of the original.

Most Deserving of a Sequel
Shadow of the Colossus (PS2)

This game just begs for a new game plus mode. Am I right, or what? C’mon, anyone who’s played through it and seen the ending knows perfectly well where my mind’s headed with this; it’s just a shame the game’s developers weren’t on the same wavelength. But they’ve got a chance to redeem themselves now, don’t they? Make the sequel that should’ve been a new game plus mode! Let us know what happens to the characters after the game’s climactic ending. Give us some closure!

Most Innovative
Trauma Center: Under the Knife (DS)

There’s so many puns involving “your stylus” and “playing doctor” with this game that I’m having a hard time not dying from laughter due to all the hilarious jokes swarming my brain. Being the only game on the market (and, more importantly, ever) to offer much in the way of surgery simulation, Trauma Center is the perfect foil to Capcom’s Phoenix Wright: Ace Attorney, both being titles that’ll save you loads of time, energy and cash in the form of schooling. I know I’d trust a doctor who trained on Trauma Center; that’s for darn sure.

It’s pretty much a guarantee in recent years that a new Ninja Turtles game is going to disappoint. And how could it not, when compared to the brilliant past titles for NES and SNES? It’s a shame that Konami, rather stubbornly, refuses to make a Turtles game that fans of the original series would ever want to play, choosing instead to make something akin to a thousand other mindless, generic platformers out there that no one who knows anything about videogames, or indeed, actually likes videogames, would ever buy. This is the sort of crap you get for Christmas from people who wanna get their holiday shopping done as quickly as possible and are just grabbing the first thing that catches their eye.

LucasArts, in an attempt to show that they could make decent Star Wars titles if they wanted to gosh darnit, released not one, but TWO Star Wars games actually worth playing this year! While not as engaging or unique as Lego Star Wars, Star Wars: Battlefront II offers a great multiplayer experience that builds on last year’s title without ruining it, which has generally been an unexpected plus with sequels. The PS2 version has the advantage here because you can go online without paying Xbox’s monthly fee; but either version is still worth your while.

WarioWare games have consistently been some of the best games of the past several years, and Twisted! tweaks the formula by asking you to actually physically turn your GBA around in circles in order to steer cars, catch various things, and do whatever else the game shouts at you to do. Granted, there aren’t as many GBA games this year as there have been in years past, and this category might not even exist next year; but if it doesn’t, I’m glad to see it go out with such a great title.

It’s gotta be a lonely, lonely existence as an action-RPG for the PSP. Heck, it’s gotta be a lonely, lonely existence to be a game for the PSP, considering the system has yet to be much more than an expensive MP3 player. Still, for what it’s worth, Untold Legends is an entertaining enough game; and it’s certainly gotta be more worthwhile than a half-dozen ports of crummy PS1 games.

Board of Director’s Choice: Untold Legends: Brotherhood of the Blade
Readers’ Choice: The Lord of the Rings Tactics
Last Year’s Winner: N/A

Considering the sheer amount of mediocre mascot-starring kart racers available to us today, it’s almost hard to imagine one of their ilk being worth anything so grandiose as a GameCola year-end award; but Mario Kart has yet to be anything less than stellar. Adding several new characters to the cast, new items, new race tracks and allowing gamers to go online via the DS’s WiFi capabilities, Mario Kart DS is a must-own among the other seven or so DS games currently in existence.

Easily one of the best games I’ve played all year (and one of the best action-RPGs I’ve ever played, to boot), Jade Empire completely trumps the much more publicized Fable, despite being just about the same game. It’s more expansive, it’s got a better story, it doesn’t end after six hours and it offers you much more in the way of choices, which was Fable’s big selling point.  If you own an Xbox and you don’t own this game, you probably don’t actually exist.

It seems like I’ve been saying this for a lot of categories this year, but it sure hasn’t been a great 12 months for the GameCube, eh? There couldn’t have been more than 30 games released this year exclusive to the Nintendo console, and more than half of them were made by Nintendo itself. It’s no surprise, then, that the best GameCube game of 2005 is a Nintendo title, one of those new-fangled Mario sports games. Me, I pine for the days of NES Open Tournament, but those days are long past.

A third award for Shadow of the Colossus makes it the Lord of the Rings of our awards this year, but trust me: It deserves all the praise it’s getting. While Champions: Return to Arms and We Love Katamari put up a great fight this year, Shadow takes them both out with a jab from Little Mac’s power glove. Here’s hoping the developers of Ico and this year’s best PS2 game keep churning out the hits.

I was wondering how long it’d be before a fellow Franzen won this award! Rick’s my older brother, and he’s been a loyal reader of GameCola since its inception in 2002, despite not having played an actual videogame since around 1990. That’s dedication. He’s written us tons of letters, given us all kinds of useful feedback, and even voted in our Readers’ Choice awards every year we’ve had them. He also helped me solve Mario 3 when I was just a wee gamer, showing me all his fantastic “Rick Tricks” that I still use to this day. Thanks for all you’ve done for us, and for me, Rick!

Employee of the Year
Zack Huffman

My dear readers, I’ll be perfectly honest with you: I have never, in my entire life, played a single Resident Evil title, including the one we’ve voted Game of the Year for 2005. There’s no particular reason I’ve avoided them; it’s just that none of them have ever crossed my path. Still, just about all of our writers voted for this game, citing it as one of the best games they’ve played this year, and it’s hard for me to argue with that. It’s the latest in a long line of successful survival-horror titles, and from what I’ve understand, it’s the best in the series. So, cheers Resident Evil 4, and congrats on winning our most prestigious of awards!

Now that we’ve got 2005 out of the way, we’re on to bigger and better things. Click here for a sneak peak at some of the top titles of this here new year.

Welcome to the NEWEST edition of the thumbs that can (...but can't really) see the future! I would NOT like to point out that the last two months have seen more new THUMBS articles than the new GameCo