Now I’m not exactly a donut connoisseur, but I’ve eaten my share of fried sugary bread, and let me tell you: Japan’s Mister Donut is good. How good? Well, it’s sure better than the airplane food on the way over, lemme tell ya! I mean that stuff is one notch above Styrofoam on the taste-o-meter, am I right, folks? But seriously, if I could be serious for just a minute… You know, there are a lot of children out there who need our help. Did you realize that a child is physically abused somewhere in the world every time my girlfriend’s daughter doesn’t get my beer the first time I tell her to?

Okay, after 3000 yen worth of Kaluha worked its way through me, I’ve decided to start this article over. Why didn’t I just delete the first part? Well, my delete key is broken, jackass. (And yes, so is my backspace key, insert key, the function that highlights text in Windows, and all that other shit too, smartass.) And let me confess: The truth is that I don’t even have a girlfriend’s daughter, or a girlfriend, for that matter. And I’ve been on this god-forsaken island for nearly six months now. And everyone around me seems to be wearing nylon pantyhose with patterned designs stitched into them, God Damn It! Shit, now that I’ve done got on this train, I guess I’ll have to go whack it for the third time today.

Now, about Mister Donut, let me just take a minute before I talk about it to congratulate Paul for finally fixing up the site. You did the right thing, man. The rest of that crap didn’t deserve to be in the same frame as my monthly dose of genius here.

So in conclusion, Mister Donut is a donut shop in Japan. You can read the next installment in my Mister Donut series… right now. Just scroll down a bit.

First, let’s take a look at the contenders in our fried bread battle royale.

Nevermind, I’m just gonna start the countdown to the winner, but I like that sentence up there. By the way, I chose these guys because each represents a certain “tribe” of donut. Of course you can find any of them dipped in your poison of choice, be it chocolate, strawberry or caramel. 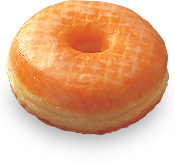 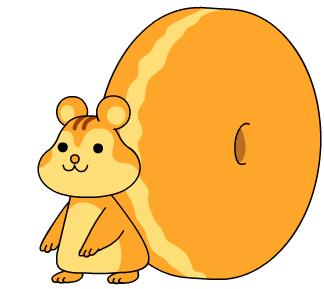 This guy is what most people think of when they think of donuts, and why I don’t like donuts too much. The boring, bland, dry bread that belongs fucking a sandwich from both sides forced into a hoop and covered with something sticky and sweet. Next.

Number 4: The Honey Churo
CCC: [I have no idea what the fuck this thing is supposed to be or what the string of phonetic Japanese comprising its name is supposed to hint at, so I’ll call it] CHUPACABRA 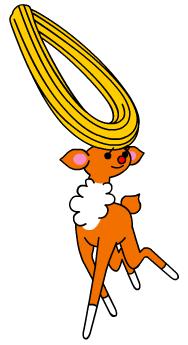 This represents your donut interculturalism and spirit of variety. In fact, this is about as varietous as it gets, baby! Literally a Mexican donut (in Mexican “chu” means “do” and “ro” means “nut”), the Honey Churo is truly the symbol of everything that is great about our wonderful country’s (I’m gonna go ahead and assume that only Americans are awesome enough to read this) filthy, hanging nutsack, without all the… well, filth. No longer do you have to get and harassed by mariachi bands and kidnapped to get a good churo�just visit the Land of the Rising Sun! 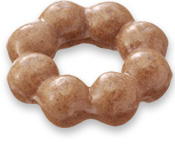 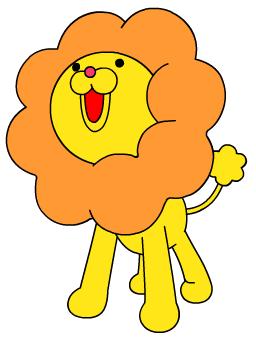 As a side note, Pon de Lion is the leader of the donut forest gang. Think of him as Optimus Prime of donut land. 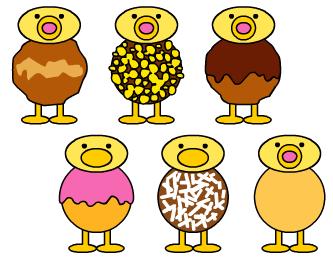 Now you’re speaking my language! These tasty little guys don’t just buck tradition, they anally rape it and bury its body in their backyard! Who says a donut has to be a… donut? Well, nobody anymore, because if they did I’d stuff enough of these little balls of goodness into their fat hippy mouth to choke them to death and make the world a better place. Half potato, half bread, and all delicious. ‘Nuff Said. No Fear. Real Men Love Christ.

The D-Chirpies are also featured in a hilarious campaign of paper placemats that come with your order, the best of which actually shows you the process of a Chirpy getting hired to be cooked (including his quote at the interview, “I am certified Level 2 in English”) and making it to your plate. Buy me a scanner and I’ll show you. 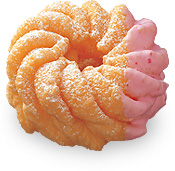 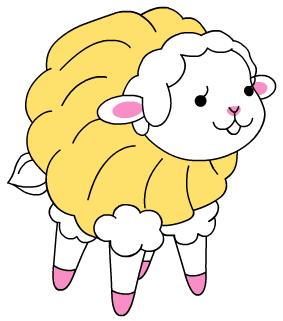 When it comes down to it, you can’t top the classic. While the French men were pussying out of wars, their women were developing the perfect donut. And Japanese ingenuity has only made it better. The bread is so soft it melts in your mouth, as if the only thing holding it together to begin with was the mild glaze. Even if these weren’t cheapest in their plain form, I’d still buy them that way.

Honorable Mention: The Curry Pan
CCC: Sadly, none. I guess he’s too awesome to hang out in a gay sugar forest. 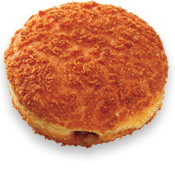 Picture a soft bun filled with curry and fried to a light brown crisp. Not baked, but fried. Yes, it can kick the ass of every sweet in the fucking Mister Donut lineup and still have enough HP left to cast Chakra on an ally. However, since Curry Pan has the unfair advantage of not even being in the realm of sweet bread, I had to disqualify him.

Another great thing about Mister Donut is the free refills on coffee. I have never been to another cafe that offered refills in this stingy damned country, which makes Mister Donut my cafe of choice by default even without considering the donuts themselves. Also, you can collect points to constantly trade for cool prizes like these bathmats! Rock on! 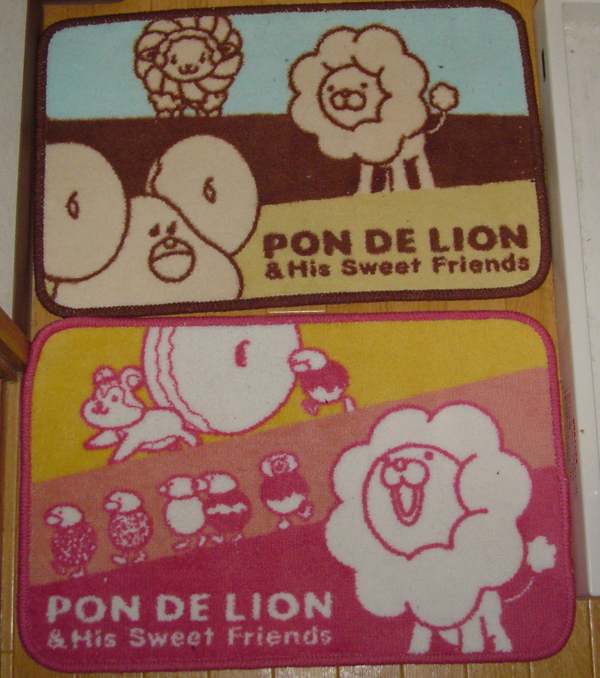 So now you know the best reason to visit Japan! Tokyo Tower? Well, it’s pretty gay—especially the costumed mascot, who is actually DRESSED AS A TOWER (could they be any less creative?). Akihabara? I’d rather go to lik-sang.com than fight the crowds. Nope, the number one reason to make the trip is for the awesome donuts! Number two is to have sex with me.

But no fat chicks.

I’ve wanted to do this from the start, but never got a single reader mail until now. So with much thanks to my new best friend, Omar Gray, I’m proud to present the first edition of “Richo’s Mailbag”!

Subject: Hey baby, found this site and wanted you to check it out firstNeed Software?

Finally the real thing – no more tip-offs! Enhancment Patches are hot right now, VERY hot! Unfortunately, most are cheap imitiations and do very little to increase your size and stamina. Well this is the real thing, not…

Wait a fucking minute!!! Almost had me!

Okay, fuckers. Way to shit all over my gift of free entertainment and then leave me all alone crying into a pool of my own semen. Hmm… three body fluids in one sentence, and it wasn’t even intentional…

I actually couldn’t find my Japlish file this morning, so instead I just took the first thing I saw around my sink and took a picture of it. I was a little disappointed, but since then it kinda grew on me, so I’m giving you permission to like it as well.

Well, I hope you’ve enjoyed this slightly special edition of LRAIJ. I should have done my special one last month, but I’m a rebel like that. Like the Turtles instructed me at their live show in the 80s:

Everybody does it in a different way
Just do it on your own
That’s what the Turtles say!