Hey, everyone! Welcome to the first installment of Inside the Guide! I’ve written over 80 videogame guides, which you can find all over the Internet, especially on GameFAQs and IGN. The basic idea of this column is that each month I’ll choose a game I wrote a guide for, and then write about what it was like to write that guide. I’m going to start off the column by discussing the first game I wrote a guide for: Mickey Mousecapades for the NES. 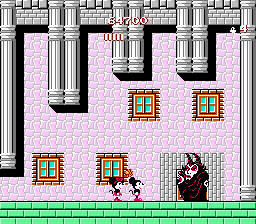 Mickey Mousecapades is a game where you play as Mickey Mouse, who goes through various different worlds in an attempt to save Alice in Wonderland from her nightmares, or something like that—like with most NES games, the plot was not too clear. In a two-player game, you can have a friend play as Minnie, but if you don’t have any friends (which is probably the case if your idea of a fun time is bringing out the NES and playing Mickey Mousecapades), Minnie is an NPC character who follows Mickey around and costs you many lives by falling down all the holes that Mickey jumps over.

The first and the last levels of the game are the only ones I ever played on my NES. Those levels were the Fun House (which wasn’t much fun at all, come to think of it), and the Castle, which ends in a showdown between Mickey and a midget disguised as the villain from Sleeping Beauty. The other levels are all impossible to beat without save states, unless you’re a demi-god like my cousin, who beat them all on his first try.

This was my first guide, so I started it off with an extensive “general information” section that tells people how to e-mail me. I did this because I’ve read other guides whose authors are annoyed when they get tons of e-mails asking stupid questions about a game. I didn’t want this to happen, so I followed their example and set down rules for e-mailing me right from the start. 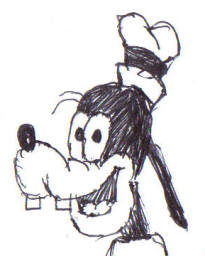 There’s also a bunch of other stupid stuff I did because it was my first guide. For example, I put in a “Secrets” section, because I was confident I was skilled enough at videogames to find hidden secrets in every game I played. STUPID! I also put in a section containing all the Game Genie codes for the game. STUPID! I put in a totally useless section explaining what movies the game’s characters come from, as if anyone cares. STUPID! STUPID! STUPID! It’s a good thing no one reads this guide, or I’d have to update it to avoid embarrassment.

I can’t think of anything else to write about this guide or the game, so I guess that means my column is over. Unless I get any special requests for a specific game, I’ll probably talk about Deja Vu 2 next month.

PS. Paul says it’s impossible for my cousin to have beaten the game on his first try. Now that I think about it, I seem to remember that my cousin also said he had a crocodile in his basement. Maybe he was lying.

You might not know it, but I went to Capcom headquarters last week to bug them about making Duck Tales 3. Security hauled me out of the building (again), but not before I managed to steal a copy of M