Hello everyone, and welcome to Inside the Guide: the only column that gives you an insider’s view of the art of writing videogame guides. This month I’m discussing Nancy Drew: The Curse of Blackmoor Manor, and I’m going to try something really different this time around. I’m going to do this month’s column like Travis does his reviews in order to give you a step-by-step idea of what it’s like to play and write a guide for this game. Should be interesting, right? Let’s go!

OK, here we go: another Nancy Drew guide. I start up a Word file to write the guide in, and then I load up the game. This one’s called Curse of Blackmoor Manor and has a picture of a cloaked figure on the cover. Kind of cool, even if you never see any cloaked figures in the game itself.

I watch the game’s opening cutscene. Nancy is getting dropped off at the Blackmoor Manor in Britain. Of course, it’s a creepy old manor with all sorts of traps and tricks and hidden passages for Nancy to explore. It’s surprising that Scooby Doo and the gang aren’t already here.

The cutscene is actually kind of cool, featuring the really smooth animation that these games use for long cutscenes (as opposed to the somewhat chunky animation it uses when the characters talk). Nancy walks up to the manor, a creepy voice calls out “Nannnnnnnncy…” and a growling monster with red eyes suddenly appears in the bushes. Tell me that’s not freaky. Unfortunately, the old lady who runs the house thinks Nancy is making things up and sends her to her room, like she’s four years old or something. What a jerk. I bet she’s the bad guy behind the creepy mystery.

I play through the game to the point where I’ve meet all the characters, stopping every now and then to write about it in the guide. Since I’ve played the game before, I know what the important things to examine are and what isn’t worth looking at (like a close-up photo of a guinea pig). This makes writing this part of the guide easy, but incredibly boring, because I already know all of the story.

Here are some of the characters in the game: 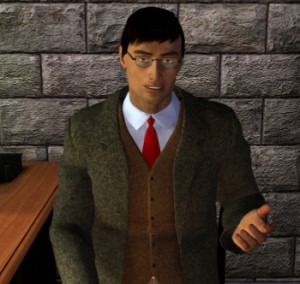 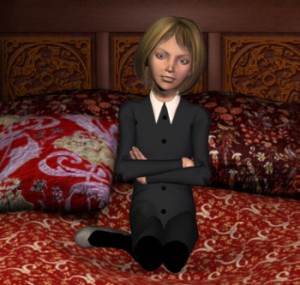 These are pictures of Nigel and Jane. Jane is the one on the right.

All of the characters give you creepy warnings about how there are bad things in the manor and say you should probably leave. That’s right: The characters in this game want you to stop playing immediately. I guess the programmers didn’t have much faith in this game.

I’m so bored…. This game is non-linear, so, to simplify things, I’m only pursuing one course of action at a time (there are seven different “main” puzzles you can do, and you can do any part of any one at any time you want). To try to make things more interesting, I put the guide in ACCUSE-O-VISION, where I accuse EVERY SINGLE CHARACTER of being AN EVIL SCUMBAG. This isn’t helping much, though.

So far, Nancy has enlisted the help of her werewolf-buddy Linda and freaky-child Jane to explore a secret passageway, which ended in a word puzzle. Fun! She’s also learned that the foods you should never feed a parrot include avocado, tea, coffee, chocolate, potatoes and lunch meat. Educational! But she still hasn’t found the legendary hidden treasure of the manor. Boo!

What a day! At 3:15 in the morning I saw Jane and Ethel perform some sort of bizarre ritual that involves pouring oil through a hole in the floor. I asked Jane about it, but she lied and said I was making things up. Jerk. Nancy should sic her werewolf-buddy on Jane.

Speaking of Nancy’s werewolf buddy, it seems that Linda actually is becoming ugly and hairy, and now she doesn’t want to talk to Nancy anymore. What a grump. Instead of spending time with her I explored the manor some more, and made it through three or so difficult puzzles. I used someone else’s guide to get me through one of them, because it’s easier to use someone else’s guide than memorize all the various ancient alchemy symbols. Rather than just copy/paste instructions from the other guide, I make a more useful, text-only version that will solve the puzzle, and put it in my guide. That’s not plagiarism, right? 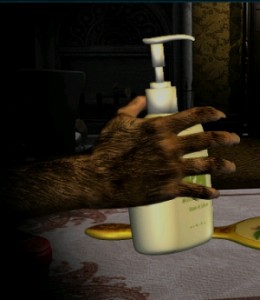 Nancy’s werewolf friend, and a picture of the bizarre ritual.

Once I get through the puzzles, I end up in the hidden place where the manor’s legendary treasure is hidden. All right! But in order to get it, I have to go on a long side-quest to find six missing pieces. Each piece is, of course, hidden by multiple hard puzzles. In case you haven’t noticed, this game is heavy on puzzles and light on dealing with the various characters in the game. I guess that’s a good thing, because the characters in this game aren’t too interesting, and they lie half the time, anyway.

I split my guide into six sections, each section detailing how to get one of the six missing pieces. I used the other person’s guide and my memory of what to do to write each of these sections, and then I played through all the sections and fixed up my guide where appropriate.

Then I tacked on another section that explains what to do after that in order to get the legendary treasure, which turns out to be a completely worthless artifact owned by the person who first built the manor. I went through all that hard work for a useless chunk of rock? STUPID GAME! I HATE YOU!

Nancy gets a better reward, however, because Jane shows up and reveals that she’s the bad guy. Jane isn’t too smart, however, and falls into a trap. Nancy forces Jane to confess everything, then Nancy saves her.

I didn’t like the ending that much. Although it’s nice to learn that Nancy’s friend isn’t really turning into a werewolf, I find it hard to believe the Jane made Linda all hairy by putting hair tonic in Linda’s moisturizer. Plus, unlike the endings to the other Nancy Drew games, we don’t get told what happens to all of the characters afterwards. But who cares? The game is over! Yay! That means my guide is done!

That means this article is done, too.