I’ve heard that Simpsons games, in general, “make you want to die,” but is that really, truly, entirely accurate? I can name three—Bart’s Nightmare, Virtual Bart, and The Simpsons arcade game—that are totally somewhat worthwhile. So what gives? Why the bad rep? It’s just Bart vs. The Space Mutants, isn’t it. Well screw that game, and screw the haters. The Simpsons makes good games, and this year’s classic is no exception. Thanks, EA, for taking this license and creating YET ANOTHER great title!

Well, it could’ve only gotten better, considering the original, am I right? Plus, it’s not like they’re making any worthwhile new Tomb Raider games, so maybe if they just keep remaking the old ones, they’ll eventually come out with some worth purchasing. It’s what Final Fantasy’s been doing for years. And hey, Lara Croft! She’s a total hottie! Was she in that Playboy spread from a few years ago? The one with the videogame characters? Ooh baby. She’s no Mia Fey, but she’ll do.

(…I’m sorry. I haven’t actually played this game and I have no idea why people voted for it.)

GlaDOS: the disembodied computer voice that launched a million cake jokes. She leads you through the world of Portal—arguably the most entertaining game in Valve’s The Orange Box—and she’s apparently a lot cooler than “Female Pokémon Trainer,” who was a big-time front-runner in this year’s voting. Congrats, GlaDOS! Thank God you’re not a seagull.

Most Deserving of a Sequel
Portal
(PC/X360)

Three hours of gameplay just made us want more—lots, lots more. Despite its length, Portal itself is worth a good $40 of The Orange Box’s price tag, considering that it’s one of the best first-person shooters ever made. (Seriously, have you tried to go back and play Wolfenstein 3D lately?)

So simple, so addictive. And so innovative! A shooting game without the shooting—at least, not your everyday, with-bullets shooting. Who knew that the first-person perspective could be used for anything else?

What should have been the best Guitar Hero EVER ended up being a real disappointment, with lackluster songs, the entire game being hastily cobbled over GH2’s front end and, worst of all, expecting consumers to pay full price for it. Maybe Guitar Hero should go the Rock Band route, instead—selling new songs over XBLA and PSN rather than making a whole new game every few months. Hey, speaking of which….

Take the fun of playing a Guitar Hero (that isn’t Rock the 80s) with your friends, then add extra friends and two extra instruments. You can’t go wrong. Seriously. If you haven’t played this game yet, just imagine how badass you’d feel if you were wailing away on a big plastic guitar while surrounded with friends wailing away on their own big plastic instruments. It’s just awesome.

Crysis—perhaps most famous for being so graphically-intense that most computers can’t actually run it—is arguably the best computer game released this year, closely beating out the new season of Sam & Max. Sales haven’t been strong for this critically-acclaimed FPS, but a potential port to the big-boy consoles in 2008 could put this game into the black.

The first part of a planned three-part epic, Mass Effect is by the people who brought us Star Wars: Knights of the Old Republic, Jade Empire, and a host of Neverwinter Nights and Baldur’s Gate titles—so you gotta think, right from the start, that it’s destined to be good times. A hardcore open-ended, Western-style RPG, Mass Effect has a strong character-driven plot that involves…space exploration and stuff. I don’t want to give too much away; you really should just check this game out for yourself. Now. Right now.

None of the competition even came close to besting this latest Phoenix Wright title for the DS. It’s got plot to spare, classic point-and-click action, and memorable character after memorable puzzle after memorable trial. Unfortunately, this game may be Phoenix’s last stand—the next game in the series stars an entirely different lawyer, though word is that Wright may have a role in the new series: a role that’s bound to depress the spiky-haired defense attorney’s many fanboys. 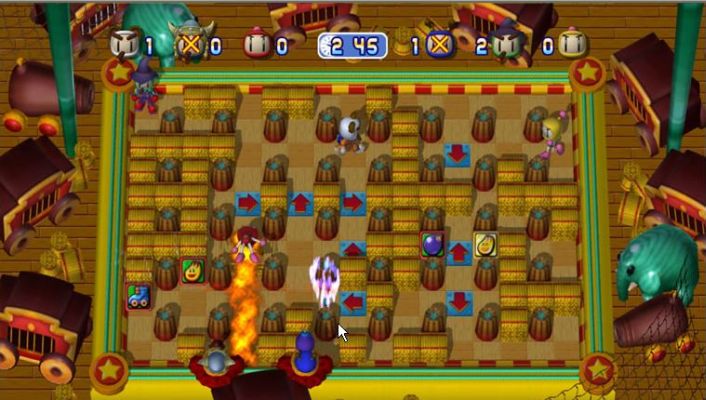 Well, it’s Bomberman. And not the crappy Act Zero version, either—this, right here, is honest-to-God gigantic-headed Bomberman. And you can play it over Xbox Live! No more will you have to have actual, real-life friends in order to play Bomberman; now, you can play with all the random, pain-in-the-ass homophobic 14-year-olds that your heart desires.

Employee of the Year
Alex Jedraszczak You might’ve noticed this, but Alex’s been picking up Employee of the Month almost every month this past year. And with good reason—the guy’s always got his articles in way, way ahead of deadline, he’s willing to help out with the occasional Versus Mode, he comments all over the issue, and, oh yeah, his writing’s not too bad, either. He’s even got three reviews for us this month—which he sent to us over a month before the deadline—and he probably would’ve gotten EotM this month, too, if a plucky new guy hadn’t sent in thirteen reviews.

The Atlas Shrugged gone horribly wrong shooter actually lends an air of artistic respectability to the stale FPS genre, not to mention a few scattered RPG elements. Plus, it’s underwater, and you get to kill things called “Little Sisters.”  And hey, it’s the “spiritual successor” to System Shock, and everyone loved System Shock, right? No, seriously; the game’s provocative plot, immersion, elaborate and artistic world, and kickass gameplay make it a no-brainer buy.

So, what did we miss? Anything? It’s doubtful—we kicked some major ass in putting this list together. Still, if you think that something other than Bioshock should’ve gotten top honors, or if you’re a really, really big Rock the 80s fan…post!