Something was very, very wrong. According to Rick, the only thing Tom had to do to get out of Resident Evil was find a key and get through a door. Well, he had found that key and opened the door, but much to his chagrin he was still in the game. He had advanced through nearly the entire game, unlocking new areas and slaying the boss monsters, but nothing he did seemed to have any effect. Rick was flabbergasted, because according to every piece of data he had, Tom should have exited the game long ago. Also, the system was once again trying to block his access to the game, and it was all Rick could do just to stay plugged in. He briefly considered telling Tom about the new development, but decided that his friend was under enough stress at the moment as it was, and kept his technical difficulties to himself.

“That’s it, I’m going to be stuck in here forever, aren’t I?” said Tom. “Trapped in a hellish existence of rotting corpses, static cameras, and bad voice acting.”

“Hey, don’t panic, we’re getting you out of there,” replied Rick, just barely redirecting the system’s latest attempt to lock him out. “Look, you’re almost finished the game. Once you reach the end, the system will have no choice but to send you to a new game, and we can keep on going as normal.”

“I’m not sure ‘normal’ is the right word to use in this case, Rick, and besides, how can you be so sure? You seemed sure I would leave this game hours ago, and yet, here I am.”

“I’m sure because I made this thing. It’s essentially a videogame jukebox; if you don’t stop it earlier, it’ll just move onto the next game when the one currently running is done.”

“Rick, EVERYTHING HAS CHANGED! The system has malfunctioned, I’ve been separated from my physical body, and you’re still expecting everything to work the way it was supposed to? Are you naïve, or just stupid?”

“All right, that’s IT!” Rick was losing his temper. “I have been busting my ass trying to get you out of this damn machine, and now you insult my intelligence? I’m sorry you’re in this mess and yeah, it’s my machine so I’m willing to take the blame for it, but you’ve got a hell of a lot of nerve to call me names me after everything I’ve…dammit.”

“The system has locked me out.”

“Just now. I’ve been fending off its attack since you went through that first door, and when I was distracted it finally got me.”

“No. With this access point blocked I’m out of options. Maybe there’s a way back in, but I have no idea where it is. If I wanted to do a little rewiring, sure, I could get in, but I’m really wary of messing with the system while you’re in there.”

“Not completely. Voice input is still working, obviously, so I can still help you out with tips. I can’t figure out what your objective is, but if recent events are any indicator, that ability is worthless now anyway.”

“What about the data? You know, the stuff you were going to use to get me the hell out of here.”

“It’s all been junk lately. If it’s going to be of any use to us I need to figure out where this problem is coming from. I could always run through the copy of the code I have on my other machine, maybe see what I can find.”

“Yeah…yeah. OK.  That sounds good. Why don’t you run and do that and I’ll….just wait here, I guess.”

“Are you going to be all right doing that? You’re at the end of the game; isn’t a Tyrant zombie supposed to be wandering around?”

“Eh. I’m at least two rooms away from the lab where that thing attacks, and it won’t do a thing until I get there. Go now while we’ve got the time.”

“All right. I’ll go check out the duplicate code. I’ll be back in a few hours.”

Tom could hear Rick ascending the basement stairs, leaving him alone. The next few hours were sure to be dull, but after what he’d been through he could use some dullness. At this point, Tom was starting to lose hope that he’d ever escape Rick’s system. He wanted to trust in the abilities of his friend and knew that if he had any chance of getting out his predicament it would be through Rick, but it felt like they were on the wrong side of a losing battle. Tom had just slumped down against the wall in despair when he heard the heavy footsteps coming down the hall. What the hell is that, Tom thought. His question was quickly answered as a door at the end of the hall slid open, revealing the form of the Tyrant, its putrid flesh glistening in the fluorescent lighting. Tom backed further down the hallway as three eyes focused on him and blinked in unison. 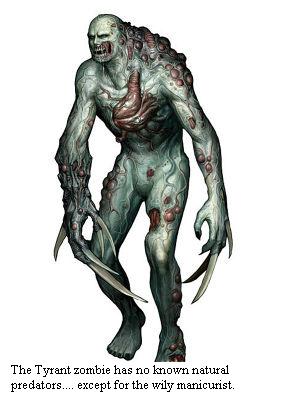 “B-b-b-but you’re not supposed to appear until I hit the capsule room….” Tom stammered.

“Am I?” the creature replied.

“And you’re definitely not supposed to talk!”

“This is my domain, human. I will talk if I wish.”

“Your domain? Just what are you….”

“Whoa whoa whoa, wait. We’re intelligent; we can talk about this.”

With that the mutant rushed at Tom, displaying a capacity for speed far greater than Tom remembered or expected.  Tom dodged to the side, and the monster crashed into the wall, giving Tom just enough time to race out of the room and lock the door. That wouldn’t stop it for long, but at least he had a moment to think. OK, the game has come to life, for real this time, and now it’s trying to kill me, also for real this time. Panic struck as he heard the monster pounding on the door, leaving dents in the large steel door as if it were a sheet of tin.  Crap crap crap crap crap I’m dead I’m dead I’m dead I’m dead. I mean, I can handle normal videogame stuff, but now it’s thinking. More pounding from the other side of the door. All right, the thing wants to test me and it can’t be reasoned with. But…if it’s a test, that means there has to be a chance I can beat it, right? The door was mere seconds from giving way. Tom gripped the Colt revolver he had been saving for just this moment and positioned himself across the room from the door.

The steel gave way. The beast entered the room and quickly spotted Tom, his weapon raised at his foe. He fired. The monster flinched but kept coming. He fired again. Same reaction. Tom fired every round in the gun into the monster, causing it to slow down, but not do much else. Of course, now I remember, he thought to himself. The only way to kill this thing for good is the rocket launcher on the helicopter pad. Ducking past his weakened adversary he raced down the corridors of the lab complex, finally coming to the helipad. The Tyrant was closing in behind but it didn’t matter to Tom any longer, for he saw his salvation shining in the dusky light bathing the helipad. Raising the rocket launcher, he took aim at the helipad entrance just as the monster emerged. He fired and felt the hot wind as the explosive streaked toward its target.  The Tyrant erupted in flames and fell to the ground. Just as he was about to go inspect his work, Tom was enveloped in a familiar white light.

The game was over, for now.

What follows is part one of a three-part journey into madness. Meteo X, a man whom God himself deemed unfit for humanity and therefore biologically categorized him as prime rib striplets, found hims