A few days ago, Microsoft released the “New Xbox Experience.” This pretentiously-named new GUI for the 360 features a new layout, user-created games, connectivity with Netflix, and Miis. No, I’m sorry; they’re not Miis–Microsoft is calling them Avatars. Whatever. Point is, now we 360 owners can all make little representations of ourselves that don’t really serve any purpose whatsoever. (I think you can use them to play Uno on Xbox Live, but seriously? Uno? I don’t think anyone’s gonna be looking at Avatars when they’re playing Uno.)

We here at GameCola HQ–we being my girlfriend and myself–were really looking forward to it.

The problem, though, was that we actually share an Xbox 360 account. (People advise against sharing an Xbox account with your sigfig, but there’s very little I won’t do to boost my gamerscore.) We needed to figure out whose visage we would base our Avatar on, and while I was pushing for a winner-gets-Avatar kickboxing match, we eventually decided to make a freakchild that looked exactly like both of us. 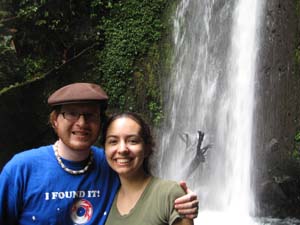 Here’s us. (I already know that we’re absolutely precious, but feel free to say so anyway in the comments.) We look pretty much alike, right? Actually, no, and that was the immediate problem with making our Avatar; we don’t even share a gender, let alone any facial or body features.

We didn’t let that stop us. 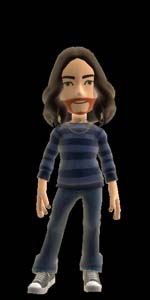 We took my beard, her hair, my eyes, her lack-of-glasses, a shirt and jeans we’d both wear, her skin tone, and my shoes and necklace, and that beast is what we came up with.

I just thought it was cool.

But hey! While I’m on the topic of the NXE, if anyone’s interested in its user-created games, I’d suggest checking out “In the Pit,” which is a cool game, because it doesn’t have any graphics. Seriously; the entire game is sound-based. You play as a big scary monster at the bottom of a pit, and you hafta rely on your sense of hearing to locate victims via their breathing. It’s awesome.

You have constructed too many pylons.