Render: A little consistency would be nice.
Rivers: I think we’ve been pretty consistent over the past few months.
Render: That’s not what I mean. Maybe stability is the word I’m looking for.
Enrique: Maybe.
Render: So you see what I’m saying, then?
Enrique: No.
Rivers: Nope.
Render: How can I explain this….

Captain Thomas “7-Eye” Render VI of Trelenodora walked along the dock with his fellow party members Rivers Fusion and Grand Master Barbarian Mage Enrique. It was clear that he had something weighing on his mind, but even clearer that his companions had no idea what it was.

Render: We’ve been running around fairly aimlessly for years now. Sure, we’ve gone on quests here and there, saved and endangered the world at least a few times, but it doesn’t seem like we’re ever moving toward a real goal.
Rivers: Pirates!
Render: I don’t think us becoming pirates again is really what I’m looking for.

Enrique, having never really committed himself to the conversation, was the first to dash toward the danger.

Render: Where is he going?
Rivers: To fight the pirates.
Render: What pirates?
Rivers: The pirates that were about to ambush us a second ago, before Enrique ran over and engaged them himself.

Captain Thomas “7-Eye” Render VI of Trelenodora spun around a few times before noticing the dozen or so enraged pirates slashing their cutlasses and lunging toward Enrique. Being a master of repelling pirates, Enrique was having no trouble keeping them all at bay with some impressive, yet effortless, displays of swordsmanship. 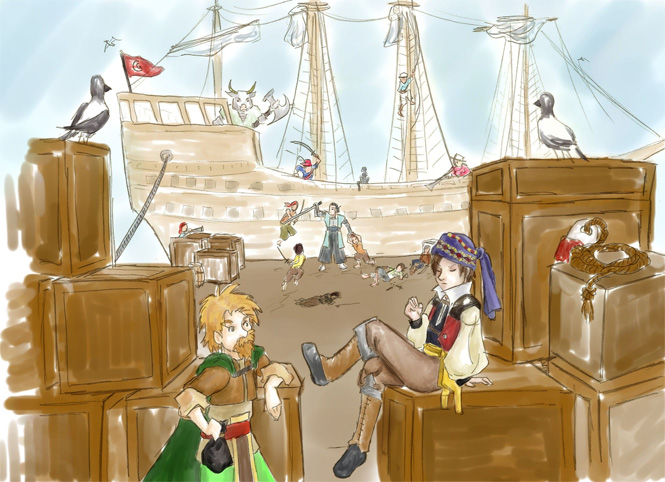 Render: Huh. So, anyway, I was trying to explain that I’m looking for a real purpose this time, before we set out on yet another aimless adventure.
Rivers: Aimless can be fun, though!
Render: Yeah, and it was tons of fun for all those years we did it. Now I’m ready for a real, meaningful goal.
Rivers: I’m going to go fight some of those pirates. That’s a goal, right?

Rivers got up and ran toward the pirate battle, making sure to stay far enough away to avoid any real danger. Lifting his hand in the air, he produced a glowing green ball of energy.

Rivers ignored Enrique, knowing full well just how awesome his catch phrase and subsequent pun were, and flung his fusion ball at one of the pirates. The unsuspecting swashbuckler’s muscles locked up as the ball hit him on the chin, and he stood there, confused and incredibly uncomfortable. Rivers quickly summoned his second ball and flung it at one of the nearby ships’ anchors. As soon as the fusion ball touched the anchor, a blinding green flash lit up the area.

When the light subsided, the anchor and pirate were no longer separate entities—Rivers had fused the pirate to the anchor.

With that, Rivers, with a great deal more effort than he originally intended, pushed the anchor-pirate off the dock and into the water. Enrique could only smack his forehead and groan upon hearing another pun.

Rivers: What?! That one was brilliant!

While all of this action was going on, Captain Thomas “7-Eye” Render VI of Trelenodora had been lying on a nearby crate, still contemplating his lack of a significant goal. Suddenly, and coincidentally just as Enrique dispatched the last of the pirates, he jumped up.

Render: I got it!
Rivers: Got what?
Render: I know what really significant thing we can do with our lives!
Enrique: ….
Rivers: Huh?
Render: Have you guys listened to anything I’ve said?!
Enrique: No.
Rivers: Nope.
Render: You guys are so insensitive.
Rivers: There were pirates!
Enrique: It’s true.
Render: Like we haven’t seen pirates before!
Rivers: They are always exciting!
Render: Fine; never mind! I’m too psyched about our great new adventure to get depressed about you two insensitive jerks, anyway.
Rivers: What’s this great new adventure?
Render: Let’s go back to the ship, first. I want to explain this to everyone at once.

And so the companions boarded their ship, eagerly anticipating this “great new adventure” Captain Thomas “7-Eye” Render VI of Trelenodora had in store for them.

Gate Guardian: Or should I say, “the great new adventure YOU have in store for them!” Let your voice be heard, readers! Vote for the gate that represents the direction you want the ENTIRE season to take! This is by far the biggest gate of all time. So be sure to VOTE, VOTE, VOTE! 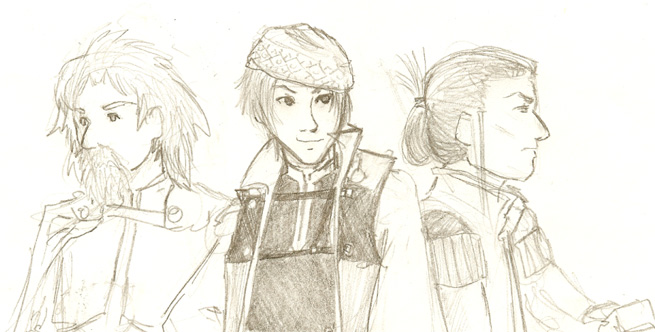 As with most fantasy universes, The Gates of Life holds a great treasure that can lead to the fulfillment of every dream that could possibly be dreamed. Captain Thomas “7-Eye” Render VI of Trelenodora figured that, even if the search for the treasure didn’t fulfill him, surely the treasure itself would. It does make dreams come true, after all.

How About a Princess?

Could it be that it’s not adventure the captain seeks, but the love of a good woman? Fortunately, the Tower of Infinite Princesses loomed on an island not too far away from the group’s current location. It couldn’t hurt to check it out!

Why are we only discussing pleasant, fairy-like options? Sparkly treasure? Princesses?! Forget that crap—this gang is going on a RAMPAGE! First stop, Helpless Gnomes’ Island.

Planning is always a bad plan. Captain Thomas “7-Eye” Render VI of Trelenodora will have to get over his search for purpose, because this group is going to leap into the first portal they see and go wherever it decides to take them.

This poll ends on February 7th.

Skip Ryder, Human Pathfinder for the Andromeda Initiative and serious pudding activist, continues to tell the candid story of his exploits.