Choose your own adventure in this RPG-esque epic that lets the readers vote on its progression.

Last month in The Gates of Life, Captain Thomas “7-Eye” Render VI of Trelenodora had a revelation: He was tired of the aimless wandering he, Rivers Fusion, and Grand Master Barbarian Mage Enrique had been doing for the past several years. He wanted his life to have a purpose. He wanted a goal to strive for. He and the other two heroes were then attacked by pirates. Enrique dispatched the pirates quickly, and Render had a second revelation: He knew what he wanted to do with his life.

And that’s where you, the readers, came in! Your votes determined what Render’s new purpose would be. Read on to see the impact your choice had on the lives of our heroes….

However, intentions are not always accurate predictors of what is to come. The name of the island should have tipped them off to the imminent trap. Gnomes are never helpless, as our heroes would discover shortly after dropping anchor on this island’s shore….

Rivers: So, what’s the plan here again?
Enrique: Killin’. Killin’ is the plan.
Rivers: That’s not a plan. That is a verb.
Render: Who said we need a plan? We find some gnomes. Hopefully we’ll find some young ones frolicking here on the beach—that way we don’t have to walk too far. Then we kill the crap out of them.
Rivers: But…aren’t we supposed to be heroes? So far as I know, this isn’t “Evil Gnomes Plotting to Take Over the World Island.”
Enrique: So far as you know!
Render: Fair point, doesn’t matter. I need to kill, and I need to kill now.
Rivers: I bet we could find some evil seabears or something for you to kill….
Render: Why bother, when there’s helpless gnomes right here?
Render: Look, my life has meaning now. Why are you trying to take that away from me?
Rivers: Whatever. I’m sitting this one out.
Render: Suit yourself. You can keep Jonathan company. Let’s go, Enrique.
Enrique: YES.

Captain Thomas “7-Eye” Render VI of Trelenodora and Grand Master Barbarian Mage Enrique stepped onto the shore of the island, leaving Rivers Fusion behind on the ship. The island seemed deserted—there weren’t any gnomes, frolicking or otherwise, in sight.

Meanwhile, back on the ship….

Rivers: Am I wrong, Jonathan? Should I have stuck by my captain and joined in the slaughter?
Jonathan: You’re wrong, Rivers, but not because you should join in the slaughter.

At this time, it should be noted that Jonathan is a member of our heroes’ crew who’d played a role in many of their past adventures.

He is also a minotaur.

Which is a half-man, half-bull creature. In case you didn’t know.

Jonathan: You’re allowing your best friends to do irrevocable damage to their souls, and you’re allowing dozens, maybe hundreds of innocent, sentient creatures to be murdered.
Rivers: How do you figure you’re doing any better? You’re still here, too, aren’t you?
Jonathan: For one, I’m not their friend—I am Captain Render’s employee. I bear no responsibility for their actions, nor any guilt for what might happen if I don’t interfere.
Jonathan: For two, it’s my job to stay here with the ship.
Rivers: Because it’s you’re “ job”?! Who cares if they’re not your friends—what about the gnomes? You’re going to let them get killed because it’s your “job” to stay here?
Jonathan: This ship might get stolen by pirates if I leave. It happens all the time.
Rivers: To use your own words, “innocent creatures” might get “murdered” if you don’t!

As Rivers Fusion and Jonathan the Minotaur continued to argue about who should stop the slaughter from commencing, Render and Enrique were about to commence the slaughter. Near where the sand met the forest of this island’s interior, our heroes finally found what they had been looking for. There was only one of them, but it was just sitting there, on a tree stump. It might have been asleep, or maybe it just wasn’t a very alert gnome. They could tell that it definitely was a gnome, though, because it had one of those pointy hats. In any event, it didn’t seem to notice as Render and Enrique approached, towering over it. 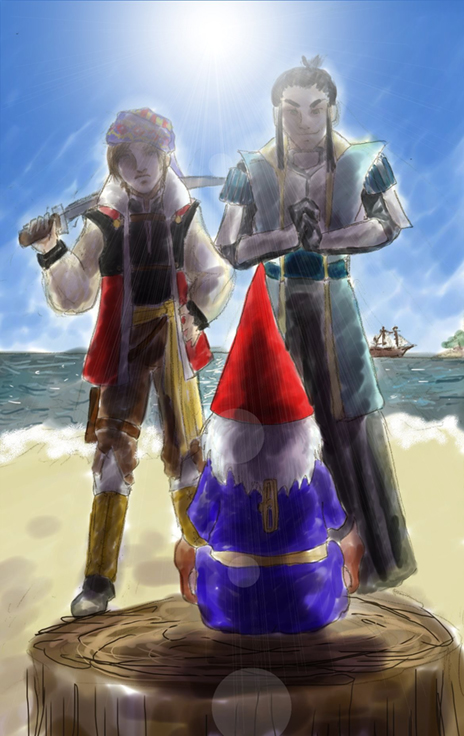 Instead, he was met with a clanging sound.

The chest of the assaulted gnome then opened up, and, before our heroes had time to react, a rope net shot out and captured them both.

They heard snickering coming from the trees above. Render looked up and saw about a dozen gnomes staring back at him, all wearing those pointy hats. The gnomes dropped to the ground. They each grabbed a part of the rope net, and began to drag Render and Enrique into the forest.

Render tried slashing his way out of the net, and Enrique tried casting a spell. Neither attempt was successful; the net was far too strong.

Meanwhile, back on the ship…. 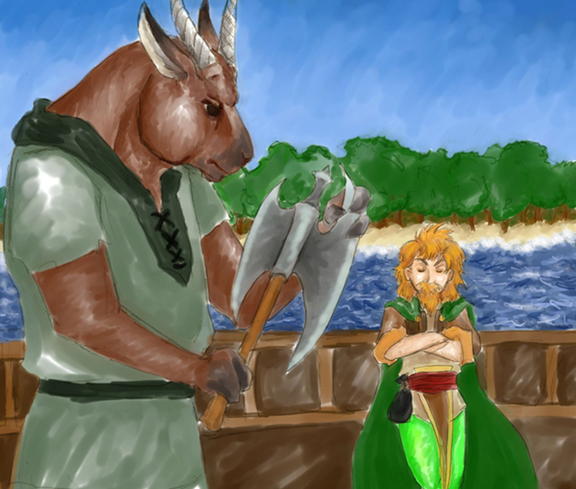 Rivers: So, we’re agreed? I’ll just use my fusion powers to fuse the ship to the island, so no one can steal it? That way we can both stop the slaughter from happening.
Jonathan: Yes, I think we are. You can undo that fuse, correct? I don’t think any of us wants to be stranded here.
Rivers: Unless this fusion somehow makes the island portable—that’d be pretty cool, wouldn’t it? It could happen, you know; I have absolutely no control over what form the fusion takes.
Jonathan: ….
Rivers: We could very well end up with an island that has a gigantic sail, some rudders, and a steering wheel….
Rivers: Oh my God, that would be so awesome.
Jonathan: ….
Rivers: Anyway, of course I can undo it. That’s how my powers work. I can fuse things together, and I can unfuse them, too. The unfusing takes a few minutes, but it’s possible.
Jonathan: Handy. Let’s go.

Rivers Fusion and Jonathan the Minotaur left the ship. Two fusion balls and one brilliant flash of green light later, their ship was an inseparable part of the island. It turned out to be a pretty pedestrian fuse—the boat was just kind of stuck halfway in the sand, like someone had started to bury it but got bored. Prudently, Rivers didn’t voice his disappointment, great as it was.

Rivers: Oh my god…we’re too late.
Rivers: Look at what they did to this one. They tore out his insides!
Rivers: I don’t know how I can even be on this crew anymore, if this is the kind of people they are.
Jonathan: You’re an idiot.
Rivers: What the hell?! Screw you, Bessie!
Rivers: That’s bullshit!
Jonathan: One, this isn’t a real gnome. It’s mechanized. Two, it’s not just a mechanized gnome; it’s also a trap. Don’t you see the drag marks in the sand?
Rivers: Huh?
Jonathan: Someone was hoping that someone else would attack this apparently defenseless gnome, which Captain Render and Enrique did. In so doing, they triggered some kind of trap that incapacitated them, and then the real gnomes came and dragged them away.
Jonathan: Unless there were never any gnomes on this island at all…no, I’m sure it was gnomes. I bet they weren’t “helpless” at all, though. Rather, I bet they named this island “Helpless Gnomes’ Island” specifically to lure in the sorts of evil-doers who’d prey on their brethren, and maybe dish out some come-uppance.
Rivers: I refuse to believe that you figured all that out just by looking at this broken gnome toy.
Jonathan: So the question now is: What are we going to do about it? The captain’s not here, and you’re second in command.
Rivers: Aren’t you actually second in command? You’re the first mate, and…
Jonathan: No, it’s you.
Jonathan: What’s the plan, Rivers?
Rivers: Well….

Gate Guardian: Perhaps he should have said, “What’s the plan, readers,” since you’re the ones who are going to decide! What is the plan? How are Rivers and Jonathan going to get Render and Enrique out of this one? The choice is yours, so choose wisely.

Time to Pwn the Gnomes!

Rivers: We’ll run in, slaughter the gnomes like we were going to anyway, then free Render and Enrique.
Jonathan: Easy enough. Let’s do it.

Parley With the Gnomes

Jonathan: Rivers, perhaps we should find a way to do this without violence? After all, we don’t actually know if the gnomes are evil or not.
Rivers: How do you figure? They captured Render and Enrique!
Jonathan: Yes, they captured Captain Render and Enrique—who were oh so innocent in their mauling of what they believed to be a defenseless gnome.
Rivers: Fair enough. Let’s just try to talk it out with them.

Why Rivers Isn’t the Captain

Rivers: We’ll run in, and I’ll fuse the enemies to some trees to incapacitate them, while you rescue Render and Enrique.
Jonathan: Didn’t you just say you can’t control what form your fusions take? How could this end up being anything but disastrous?
Rivers: Guess we’ll find out!

Rivers: It’s only two of us against God knows how many gnomes. Maybe if we wait until nightfall, we can sneak into their camp, figure out where Render and Enrique are being held, and rescue them, without being detected.
Jonathan: Sounds good to me.

That’s What You Get

Rivers: We came here to save the gnomes from Render and Enrique. I think this serves them right, getting themselves captured while they were trying to commit such an atrocity.
Jonathan: …so, what’s the plan, then?
Rivers: There is no plan. We’re going back to the ship and letting them sort this out on their own.

This poll ends on March 8.

Wow! I did sooooo much stuff with testgame this month!And now that I've given you that favorable first impression, let's move on to the more truthful items on the agenda. I did not, in fact, do much w