Last month in The Gates of Life, Render, Enrique, and Rivers set off for Helpless Gnomes’ Island, to try to sate Render’s newfound bloodlust. Rivers was uneasy about this plan, so he stayed behind on the ship with Jonathan the Minotaur, another member of the crew. Meanwhile, Render and Enrique disembarked and sought out innocent gnomes to slaughter. Only things didn’t work out as they’d hoped, as the gnomes weren’t as innocent as advertised.

In fact, the gnomes themselves had named this island “Helpless Gnomes’ Island” specifically to lure in and capture the sort of person who’d seek to slaughter their innocent brethren. Render and Enrique were caught, and it was up to Rivers and Jonathan to save the day.

And that’s where you, the readers, came in! Your votes determined what Rivers’ rescue plan would be. Read on to see the impact your choice had on the lives of our heroes….

Why Rivers Isn’t the Captain

Rivers: We’ll run in, and I’ll fuse the enemies to some trees to incapacitate them, while you rescue Render and Enrique.
Jonathan: Didn’t you just say you can’t control what form your fusions take? How could this end up being anything but disastrous?
Rivers: Guess we’ll find out!

Jonathan: Can I just say again that this is a really terrible idea?
Rivers: No, you can’t!

Turning away from Jonathan, Rivers began quickly and recklessly throwing fusion balls into trees and gnomes alike. As if eager to prove Jonathan right, the green light of the glowing spheres quickly flashed and disappeared, leaving behind only hulking, demonic-looking tree-gnomes. 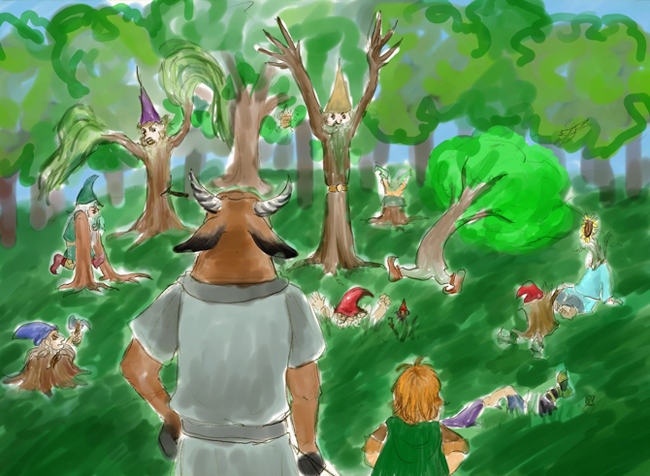 Jonathan: You know what? I’m going back to the ship.
Rivers: Wait! You have to help me fight these tree-gnomes!
Jonathan: No, I absolutely refuse to help you. Good luck, though.
Rivers: Fine, whatever! I don’t need you!

Despite what he said, Rivers realized that he did, in fact, need Jonathan’s help. Not one to beg, though, Rivers decided to just hide in the woods until the whole thing blew over. He had, of course, somehow forgotten that he just turned the woods into a pack of tree-gnomes.

Rivers: Crap! Where am I supposed to hide if there’s no woods?!

Rivers didn’t have to wonder long, because a huge explosion in the distance distracted the tree-gnomes. He didn’t waste his chance, immediately dashing back to the ship.

Rivers: I’ll be damned if I’m gonna let Jonathan see me…. I’ll just hang out behind the ship for now, and make my grand entrance when the time is right.

Meanwhile, back at the gnome trap….

Render: Who set the woods on fire?
Enrique: Dunno. Why are those gnomes made out of trees now?
Render: …Rivers.
Enrique: Ah.
Render: Maybe a loose bit of fire will float over here and burn this net so we can escape.

A loose bit of fire floated over there and burned the net, allowing them to escape.

Enrique: That was easy.
Render: Sure was! Now we just have to get back to the ship.
Enrique: No more killin’?
Render: It looks like someone has already set most of these tree-gnomes on fire, so I guess our job is done here.
Enrique: OK. Where’s the ship?
Render: Good question. Let’s look for someplace really inconvenient; I bet Rivers tried to fuse it and ended up turning it into part of a mountain or something.
Enrique: There’s a mountain right over there.
Render: Let’s head that way, then.

Unfortunately for Render and Enrique, Rivers’s fusion had not backfired, and the ship was waiting by the water just as it should have been. Oblivious to this fact, the two rushed passed the screaming, burning tree-gnomes and ran off to the nearby mountain.

Render: Look! There’s some smoldering wreckage! I guess Rivers did screw us after all.
Enrique: Looks that way.
???: Wot da ‘ell are you two doin’ here?!
Enrique: Gnome.
Render: I see it. Why isn’t this one a tree?
Gnome: A tree? Why da ‘ell would I be a damn tree?!
Enrique: All of the other gnomes are made of trees now.
Gnome: …?
Render: Our mage turned all the gnomes into tree-gnomes with his fusion powers.
Gnome: Oh. So yer sayin’ dat I set all me friends ablaze with dat fire I caused?
Enrique: Yep. 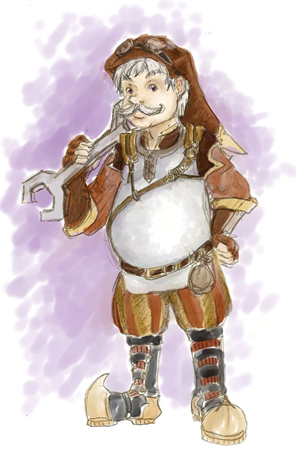 Enrique: You caused the fire?
Gnome: Sure did.
Render: How?

The gnome looked at Render incredulously, and gestured at the smoldering wreckage around him.

Render: I don’t get it.
Gnome: You act like dis is da first time you’ve seen a failed invention explode in a huge fireball and rain burning shrapnel down on a forest.
Render: It is.
Gnome: Really?
Enrique: Yep.
Gnome: Oh well. I’m gonna check out da fire!
Render: Going to try to help your friends?
Gnome: ‘ell no! I’m gonna watch da fools burn! Gahahaha!

Render and Enrique looked at each other, an awkward silence hanging in the air. After a few moments had passed, they slowly backed away and retreated back toward the beach.

Render: You know, maybe Rivers didn’t screw up and the ship will be right at the beach when we get there.
Enrique: Yep. Look. It’s right there.
Render: Oh! So it is. Let’s get on board and get off of this soon-to-be-reduced-to-nothing-but-ashes island, then.
Enrique: Good plan.

Spotting Render and Enrique from his vantage point by the side of the boat, Rivers came running out.

Rivers: You’re safe! My plan worked!
Render: Don’t even start. That was a total accident and you know it. Didn’t Jonathan try to stop you?
Rivers: No, he didn’t! He knew as well as I did that my plan to rescue you would work, so he was behind me 100%!
Enrique: Lies.
Render: Well, whatever. I’m ready to go, now that pretty much everything on this island is dead or dying in a fiery blaze.
Rivers: OK! I’ll just run ahead and get ready!

Rivers quickly rushed ahead of the gang, to inform Jonathan that he, in spite of Jonathan’s complaints and harsh words, had saved the day. Render and Enrique followed behind.

Render: Well, that was something, but I don’t think I’ve really satisfied my bloodlust. We didn’t really kill anything, you know? We just happened to be caught up in a huge accident that resulted in the deaths of thousands of innocent gnomes.

Render: Good point. Screw the gnomes. What shall we slaughter next?!

With a little effort, Rivers unfused the ship from the ground, and the crew set sail once again. Little did they know, however, that a tiny stowaway had climbed on board.

Render: What the hell is that sound?
Gnome: Heh heh heh….

Render: OK, those gnomes were not helpless at all. Where can we go to slaughter some actually helpless creatures?
Enrique: Grazing Cows’ Island?
Jonathan: WHAT?!

Stop It You Guys!

Rivers: Enough is enough! We’re ending this streak of violence now.
Render: Oh yeah? And how do you intend to stop us?

This poll ends on April 10th.

- From your television to your...well...television comes American Idol: the videogame. Based on the "hit" TV series of the same name, this yet unnamed title by Vivendi Universal is to be packaged with