If there’s one thing I know about the PS1 era of RPGdom, it’s that it’s full of curios. There is, without a doubt, a major defining line between what was released before the 32-bit era, and what was released DURING it. For safety’s sake, we won’t even mention what was released after; the RPG genre blew itself up quicker than an Islamic terrorist in the middle of a Fourth of July celebration…. Excuse me, I gotta stop giggling…OK, I’m ready.

I’ve been interested in playing Thousand Arms since I first read about it at the start of the decade/century/millennium. Anime-style RPGs were still somewhat rare in those days, and there was a lot of buzz about how much the game utilized a DATE SIMULATOR as part of its gameplay. Now, if you don’t know what a DATE SIMULATOR is…well, you’re probably the exact kind of person who would use one. It’s a clever little craze in Japan, the nation that exists like an alternate reality of America where heart disease doesn’t exist, pedophilia is just frowned upon, everyone’s an autistic savant, and arcade games consist of poking an electronic ass with a plastic finger.

Lord, who knew THAT was the recipe for technological supremacy? 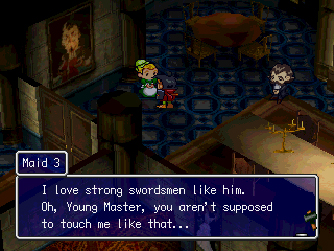 If Teddy Roosevelt had created lolicon like he should’ve instead of fucking around in national parks, 9/11 would not have happened, and Thousand Arms is proof of that. Despite the fact that its title has no connection to the game itself, Thousand Arms is a fairly competent RPG, though it doesn’t seem to ever rise above its “if we simulate the pre-coitus ritual of human interaction for the world’s largest culture of virgin loners, we could make some sale$$$” gimmick.

It’s a really bad sign when you lose track of the story halfway through an RPG. I lost so much interest that I barely remembered how the game progressed in the first place, much less WHY. That’s not to say the game is bad or completely unentertaining—it just lacks appeal in its mix of old-school RPGery, new-fangled ideas, and coreless design, and it can be something of an exercise to get through.

You play as a 15-year-old budding blacksmith who fights an emperor, saves 5–6 elemental shrines, amasses party members, and dates chicks occasionally. There’s more to the story…somewhere, and along the way you fight a mechanical army, save a moving island of pirates, and figure out just who, truly, your mentor was and why his other student is jacking off into the dark side.

Looking at the bits and pieces individually, Thousand Arms is actually a fair contender. The characters, badly designed as they are, are fairly creative and slightly memorable. The big dumb guy is typical anime cheese comedy, complete with freezing up every time a woman comes near. Nelsha looks like Howard Stern passing gas and is even less intelligent, but she makes up for it by becoming a completely different person as she dons new clothes. And don’t even get me started on that damn samurai. YOU ARE NOT MALE! You have long hair, a pink kimono, slender arms, and, if memory serves, a fucking bow in your hair! I’d have to be so high that the sun shines out my ass before I could believe that you have two different chromosomes. 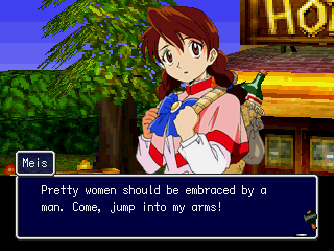 Additionally, the writing is actually pretty sharp, which is key for a game that specializes in simulated dating. I was fairly impressed with the script, and the dating aspect is actually kind of fun and a necessary part of the game. I still don’t understand how or why dating one of your female coordinators should affect the progression of your weapon, but it does make a compelling, if completely arbitrary, reason to pursue the dating side game.

The questions your dates ask range from “How do you know what true love is?” to “Hey, do you like to fart?” Those aren’t the literal questions, but you better not say “Yes” or it could cost you a spell. I’m fairly convinced that the dating side game was designed by long-time virgins, as it casts your female dinnermates as needy, manipulative, bi-polar, health-deficient crackjobs. Sometimes you can’t answer a question correctly at all. That’s so much like real life it’s alarming, and it’s scaring people from ever procreating with the opposite sex, which will leave them to…only date through…simulatorssssss….

SHIT! It’s a fucking corporate ploy! No wonder the RPG aspect of this game is so weak compared to the dating aspect:  it’s just a cover to sell more dating simulators! I refuse to prove my father right by fucking robots for the rest of my life. And while some of the dungeons are pretty creative and kinda fun, the game seriously needs a damn MAP. Crawling through these dungeons should be at least somewhat fun, but it’s not, because the combat system is only one-on-one.

Yes, that’s right; battles are Pokémon style. Which would be awesome if this game were Pokémon, but it’s not. You get seven characters, you fight up to five enemies…how is this difficult? All this does is make the battles slow and extremely laborious. While the battles are never frustratingly difficult, there’s nothing to recommend about the battle system at all. 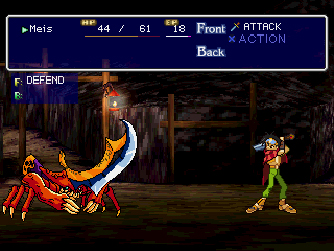 I really hate to rag on this game, because there actually is enough to like about it, but I’m not even interested in pursuing this review any further. Basically, this game is a triumph of localization and surprising early anime-RPG production values, but it’s little else. There’s plenty of fun to be had, but there’s very little substance; maybe they should have stuck another game on the disc to make it more worthwhile.

Anyway, the game is fairly decent and fun, but you won’t care much about it.