Nancy Drew has only solved one murder mystery in her 20+ game series, and that’s the murder of Jake Rogers, a student at Paseo Del Mar High who was violently pushed down a flight of stairs. Nancy’s first game, Secrets Can Kill, begins with Nancy going undercover at the school to find out the truth behind what happened.

The plot of the game is pretty intense for an E-rated game, actually. It turns out that the victim was blackmailing pretty much everyone in school. He was blackmailing the school quarterback for taking steroids, the class valedictorian for plagiarism, and (of course), he was blackmailing a girl into dating him. Eventually, it is revealed that Jake took his blackmailing scheme too far, by trying to blackmail a local drug dealer named Mitch, who promptly killed him.

The game ends with Nancy and her contact, Daryl Gray, confronting Mitch the drug dealer. A fight ensues, and the final puzzle of the game is solved by grabbing Mitch’s gun and using it on him. Technically, all Nancy does is train the gun on Mitch until the police arrive, but it’s a first-person point-and-click adventure game, so you don’t really see this. Instead, it kind of looks like the solution of the puzzle is shooting Mitch. 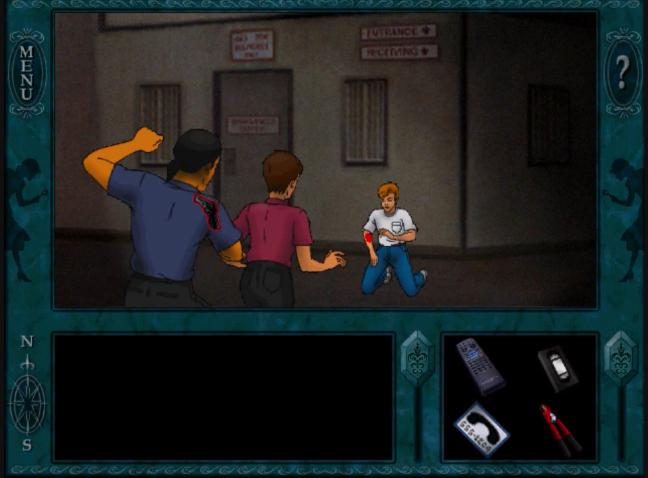 The series took a major change after this game. First of all, the characters were changed to 3D. The overall puzzle system was revamped, and of course, the plots became more tame, focusing on things like attempted murder, not actual death. Best of all, the other games come on one CD, so you don’t have to switch CDs every five minutes.

It’s not my favorite Nancy Drew game, but it is very interesting to see where the series started off, considering that it’s so different from the later games.  Those of you who are interested in seeing this game can watch my entire playthrough for it. Those of you who are pressed for time might just want to watch the last video of the playthrough (below), which contains a good deal of plot, including the above-described confrontation with the drug dealer.

The Ship is one of those games that doesn't quite live up to its potential, but is still fun to play. It is a new take on an old genre, and people will probably either love it or hate it. It definitel