My friends, it’s sad for me to say that, as of this publication, my dear editor, Paul Franzen, has written me off as mentally insane. When I told him I would write a review for Apollo Justice: Ace Attorney, I found the following reply:

I’m going to be very sad if your AJ review is positive. Anything in which Phoenix Wright is (SPOILER ALERT!!!) some piano bum (END SPOILER ALERT!)1 is NOT CANNON.

When I told him I was going to do the review anyway, I found this reply:

YOU ARE FIRED. THIS GAME ISN’T REAL! PHOENIX CONTINUES TO BE A VERY SUCCESSFUL LAWYER WITH LOTS AND LOTS OF FRIENDS AFTER THE END OF THE THIRD GAME, AND THAT’S IT. THAT. IS IT!

I bet there’s no such thing as Guitar Hero: Aerosmith either, EH, PAUL?

Now, let me move onto the game in hand. Apollo Justice is the fourth title in the Ace Attorney series, in which players take the role of a defense attorney defending a client from the cold, hard, right arm of the law. So far, this series has had a cult following amongst DS owners and GameCola writers alike2, and, for the most part, Apollo’s first chapter follows suit, aside for some minor (or major, depending on who you are), differences.

In case the title didn’t give it away, Phoenix Wright is not the main character of the series anymore. It appears that in the seven years between Trials & Tribulations and now, Phoenix has been stripped of his badge and is now some piano bum a mentor to the new main character. Apollo is a young man who would remind anyone who played the first game3 how it feels to be a young defense attorney in your first case. The change in perspective is nice, though I can’t help but feel like I’m playing as the same character, only a few years younger, all over again. Like Phoenix, it seems everyone is out to get Apollo at one point or another, whether it’s because he put his brother behind bars or because his hair is just a little too pointy.

The supporting cast consists almost entirely of new characters. The one you’ll be seeing the most is Apollo’s assistant, Trucy Wright, who is the 15-year-old4 daughter of Phoenix. I couldn’t help but notice how familiar of a role she plays to Maya Fey in the previous games, except that her form of magic, that of a stage magician, is acknowledged as fake. There’ll be no bringing back the dead this time around. The other important new guy you’ll meet is Klavier Galvin, who serves as the main prosecutor this time out. The thing about this guy is that he’s a rock star as well as a prosecutor, which becomes a major plot point in the game. 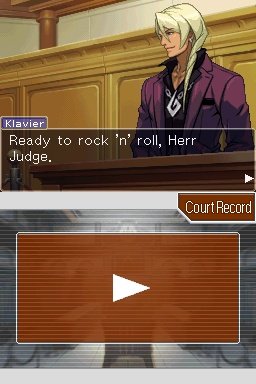 It’s funny, ’cause he’s a rock star, but he’s also a prosecutor, so he’s always ready to rock and roll whether he’s on stage or in the courtroom. And he’s German, too! I bet there’s a joke about German people that I can cook up before this review closes!5

Off the top of my head, I can only think of four major characters from the previous games that make an appearance this time out. Phoenix and the Judge make themselves apparent in the first five seconds, and Gumshoe makes a small appearance late in the game, but the returning character who actually makes in impact on the gameplay is Ema Skye, who takes over Gumshoe’s role as the detective who nobody likes. Ema brings forensic science into the game by analyzing finger and toe prints, locating trace remains of poisons, and doing other things that take full advantage of the DS’s capabilities.6

My only issue with these processes is that you’ll be doing them maybe five times total throughout the game, and if you forget how to do them later on, well, you’ll be doing a lot of trial and error to figure out what to do, ’cause the game explains the instructions to you once and only once. I can only blame my own masculinity, as I was staring at Ema’s chest the whole time. Whoops.7

Similar to the Magatama in the second and third games, there’s a bracelet that Apollo sports in this game that alerts him to when witnesses are lying in testimony. When this occurs, you need to perceive a certain habit they perform when they’re lying. I didn’t particularly enjoy this challenge, because there comes a point where you have to be so nitpicky with the habit that sometimes you don’t even know it’s occurring. I prefer my Psyche-Locks to this, a lot, and you don’t get to see any of those until very late in the game. 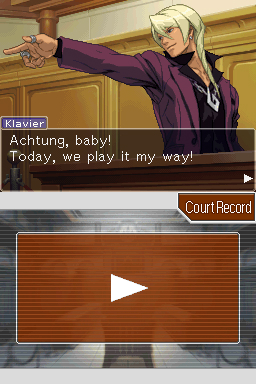 Have I mentioned that Klavier is really dreamy?8

Beyond that, there’s not really all that’s really new in this installment of the series. The four episodes are introduced with short movies that are a nice upgrade to the production value of the series.9 You’ll do all the examining, moving, talking, and presenting like you did before, and although the faces and the names change, the soul is still right there. It’s more of the same for the franchise, and while innovation drives our industry, it’s nice to enjoy a good book story-driven game once in a while.10

P.S. By the way, did you read Versus Mode this month? Man, that Sprite Monkey sure is (a really funny writer/the father of my children/Zach in disguise/Jeddy in disguise. Choose one!), isn’t he? He just (cracks me up/wouldn’t stop badgering me for sex/really wanted to argue with himself/really wants to win Writer of the Year again. Choose one!), you know?11

1. In the actual e-mail, there were like 70-to-80 spaces between SPOILER ALERT and END SPOILER ALERT. I paraphrase for you, the readers, because Paul Franzen wouldn’t.

2. Contender for Game of the Year? Are we high?

5. What do you call a man with blue hair and blond eyes? Find out next month!

6. AJ is the first Ace Attorney game built from the ground up for the DS. The first three are ports of the original GBA versions that were Japan-only releases.

It has been a furry long time since I last reviewed a game with an anthropomorphic main character, and I guess that's because they are a guilty pleasure of mine—the games, not the anthropomorphic la