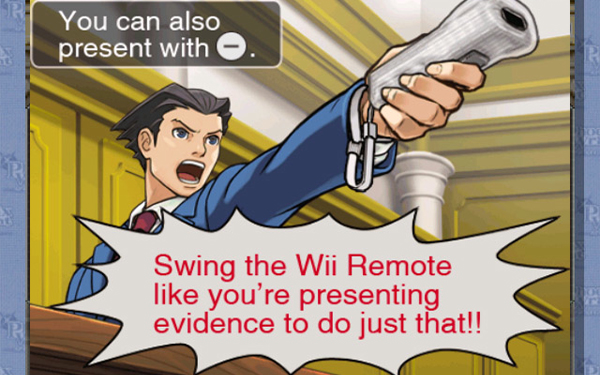 When the news that Phoenix Wright was coming to the Wii was released, most gaming sites ran articles with obvious puns, like “More Phoenix Wright? No objections here!” Ho ho ho. That wasn’t the case with GameCola, mainly because we didn’t cover that news story. However, we did come up with a list of two things Capcom would have to do in order to make the GBA-to-DS-to-Wii port run smoothly:

So the controls are awesome. What about the graphics?

…Sadly, the graphics made it through the process completely unchanged. The GBA graphics are stretched to fit the size of the TV, and depending on how big your TV is, you might see a lot of pixellation. As in, a lot . Even on my junky TV that’s older than I am, the graphics look pretty bad. So bad, in fact, that I am hereby forced to retract my earlier statements about remakes; it is 100% OK with me to give an old game a graphics rehaul for a remake if the original graphics look horrible on the new system. Here’s a screenshot taken off my TV. You can see what I mean about the pixellation, right?

If you’re like me, and you have the original DS game, the Wii-Ware version doesn’t have anything to offer besides the new controls and two additional save slots; everything else is completely unchanged. Also, the Wii version doesn’t have the DS-exclusive fifth case, which means you get nine or so less hours of gameplay. Bummer! I mean, I’m pretty sure that the top-secret DLC that will be revealed in May is the DS-exclusive case, but it’s still a bummer.

However, if you’re not like me, and you don’t have this game on the DS, then you are definitely the target audience for this release. The original DS game is pretty hard to find today, and eBay says that the price is somewhere between $30 to $70. Getting the same game on the Wii for only $10 is a major money-saver.

As for the actual game itself, let me try to summarize it in one paragraph, ’cause I’m at the end of this review. In this game, you star as Phoenix Wright, a new defense lawyer who is determined to become an ace attorney. With the guidance of his mentor/girlfriend Mia Fey, and the help of her quirky-but-cute younger sister Maya, Phoenix fights his way through four different murder trials, going up against such formidable foes as Winston “The Rookie Killer” Payne, Phoenix’s former friend Miles Edgeworth, and the austere Manfred von Karma. The game/series is highly praised for its good storytelling, as well as its ability to mix the seriousness of murder investigation with some hilarious jokes. Personally, I like the series a lot…but not enough to buy a game on the Wii when I already have the exact same game on the DS.