“One of the most acclaimed adventure games of all time…” –Steam

“…still stands as a classic of the genre…” –Good Old Games

“This is a game destined for every gamer’s all time favorite list.” –IGN

“Don’t be surprised if you’re sad when it’s over.” –GameSpot

“The epitomy of what an adventure game should be.” –jarrodj

“…the greatest adventure game ever made.” –GamesBeat

“I can’t believe I preordered this.” –Nathaniel Hoover

Adventure games, particularly older ones, all too often get a pass for lousy design. Whereas other genres are readily held responsible for poor planning and terrible execution, adventure games have a history of making willing scapegoats of the players. When a puzzle is too complicated, we blame ourselves for not thinking about it hard enough. We kick ourselves for overlooking obscure hints and trivial clues that only make sense after the fact. We accept “adventure game logic” as a genre standard, as though anything stupid is acceptable if done repeatedly.

Let’s put aside the novel premise, the charming Latin flavor, the film noir vibe, the art deco aesthetic, the memorable characters, the competent voice acting, the fully orchestrated soundtrack, the clever humor, the additional perks the remastered version has to offer, and the fact that the first few hours of the game were magical for me. Grim Fandango is a travesty. The game operates on some of the worst game design principles the genre has to offer, yet nostalgia and complacency have elevated this game to heights that no other genre would tolerate. 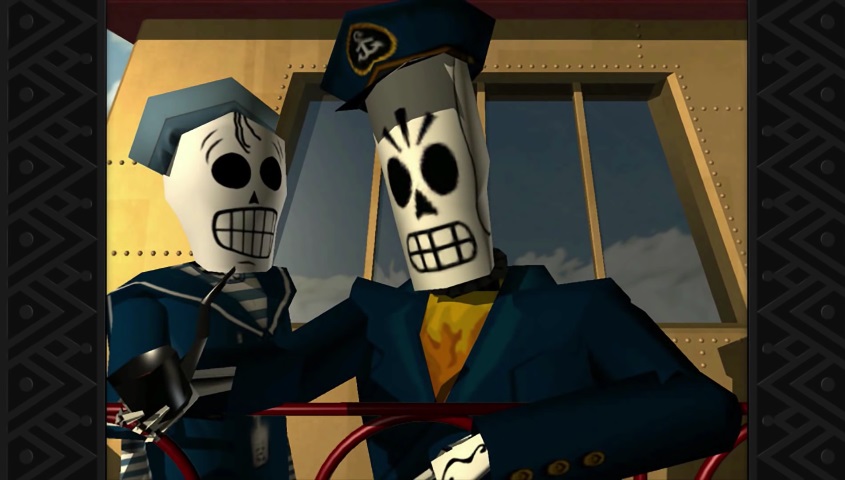 Let’s start with the inventory system. To use an item, the player reaches into the stylish jacket of protagonist Manny Calavera, the Land of the Dead’s premier second-rate travel agent. You have to wait for Manny to physically reach into his jacket, wait for him to pull out whatever item the game decides you should see first, wait for him to put that item back into his jacket and pull out whatever’s next in line (repeating until you locate what you need), and then wait for him to “equip” the item. In the same time that it takes Manny to find and extend his collapsible scythe, Guybrush Threepwood could’ve whipped out his rubber chicken and waved it at an entire room full of people. And yes, I know exactly what that sounds like. 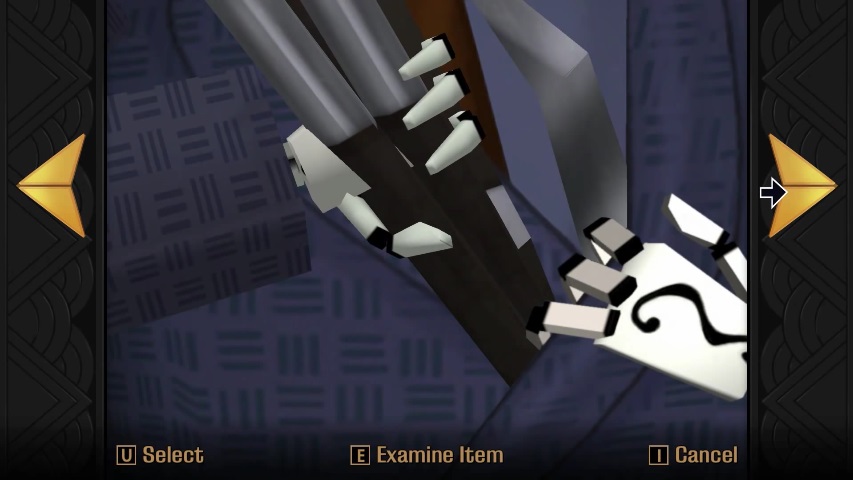 While something is equipped, all interactions with your environment are performed via that item—so if you have a can opener in hand, for example, you cease getting useful feedback about your surroundings if your surroundings can’t be opened like a can. This includes looking at things. Players who are accustomed to spontaneous puzzle-solving or trying everything in their inventory on one object before moving onto another are condemned to an excessive amount of waiting for Manny to swap things out, unless they change their playstyle entirely to accommodate the stiff, systematic approach to exploration that the game seems to encourage. Aside from that, it’s all too easy to forget what you have on hand when it’s all buried several clicks away in Manny’s jacket somewhere. And if there’s one thing Grim Fandango does well, it’s taking advantage of the player’s forgetfulness. 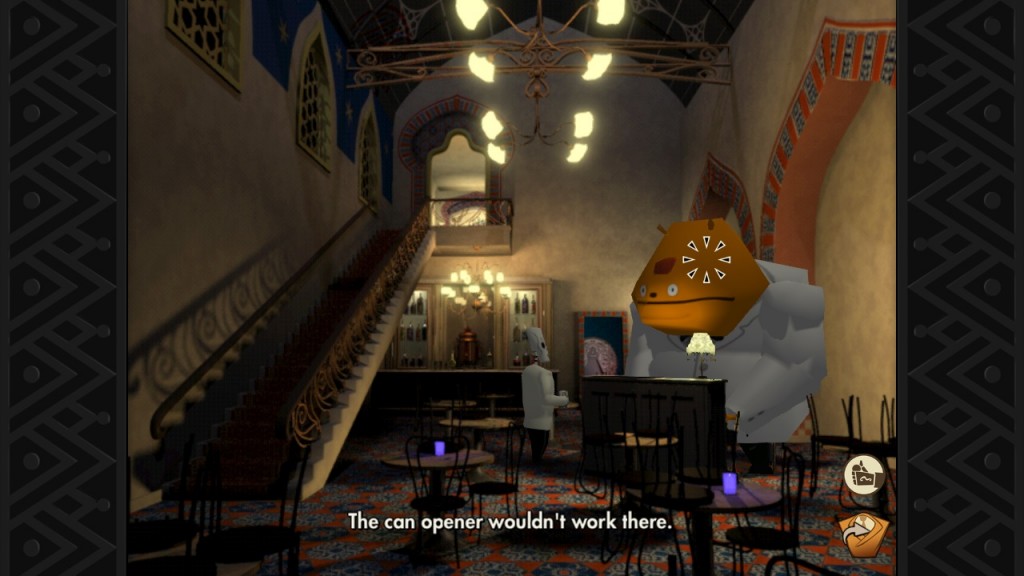 As long as I hold this, I only think of you as a can I cannot open.

Any adventure game worth its salt ensures that its most important puzzle clues are always accessible somehow. Grim Fandango likes to throw visual and verbal clues at the player once, and if you don’t pick up on a clue or your memory is anything less than perfect, you’re up the Styx without a paddle. Cutscenes and one-off conversations are full of hints you can’t get anywhere else. Manny is good about describing something the first time you click on it, and on subsequent clicks only telling you he doesn’t need the hernia, it’s not portable, and he’s not picking that up—in other words, you can always remind yourself of what you can’t do, but seldom what you can or should do. It wasn’t until after I’d finished the game that I discovered a ridiculously helpful transcript of everything everyone has said…hidden away on the Special Features menu. I don’t know what’s worse—the unintuitive placement of such a key feature, or the fact that offering complete puzzle solutions is a special feature.

What makes this worse is that clues and goals are routinely provided out of order, if they’re provided at all. I found myself solving more and more puzzles by accident as the game went on, not realizing there was a puzzle. At the beginning of the second chapter, for instance, a thorough exploration of my surroundings had me poking around on the controls for the rigged roulette wheel of my casino, inadvertently causing the chief of police to storm out of my casino before I’d even made my way downstairs to meet him. Did I just solve a puzzle? Did I shoot myself in the foot? Did I learn an important clue—or did I miss out on one by not talking to him first? I had no idea, and I wouldn’t receive any insights until the very end of the chapter. 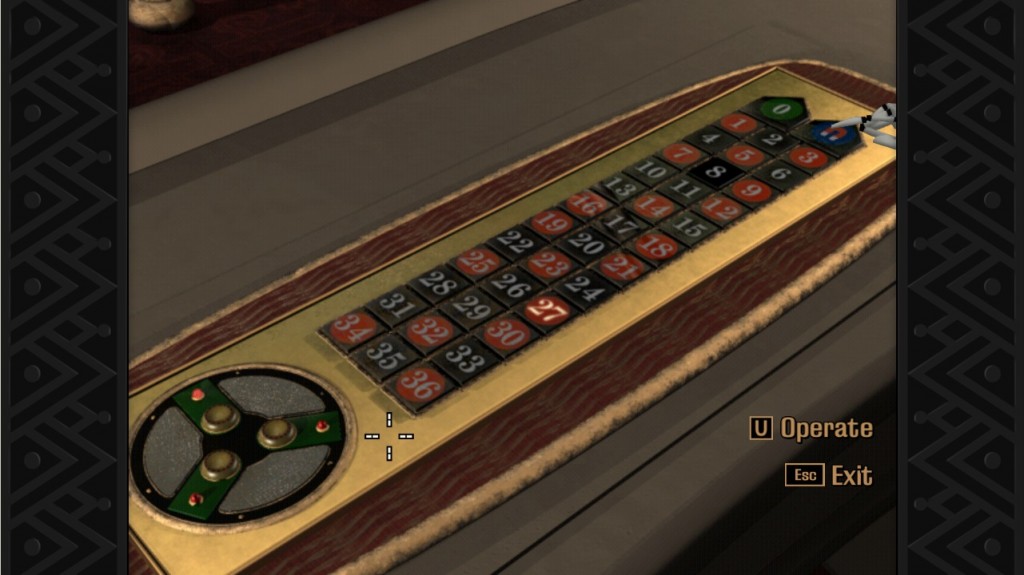 Then there are the puzzles that don’t make sense at all, even once all the information is in. In the same chapter, I was supposed to ensure a sailor didn’t show up to work the next day so that I could steal his spot on a ship. I managed to knock him out cold, and based on all the feedback I was getting, he wouldn’t be getting up for work. Puzzle solved. Yet the guy who gave me the puzzle insisted that the sailor would recover in time to show up for work. Puzzle…not solved? Which is it, game? Obviously, the real solution is to hide the sailor’s dog tags on an unidentified corpse so that the local coroner (yes, the dead have their own coroners) can find them and pronounce the sailor dead—which shouldn’t make a lick of difference if he’s still going to show up for work. And frankly, the whole side-puzzle of getting a metal detector so the coroner can locate the tags is bogus, because you should just be able to place them somewhere obvious or else say, “HEY, LOOK WHAT I FOUND ON THIS DEAD GUY!”

Then there’s the bomb disposal unit in the police station, which is only specifically identified as anything the first and only time you look at it. If you are tired and about to go to bed at this point in the game, you will only remember Manny identifying it as a floor safe, and not policewoman Carla correcting him that it’s for bomb disposal. After all, if it’s really a place to dispose of bombs in a time-critical emergency, you wouldn’t keep the door locked, would you? Of course it’s a safe. 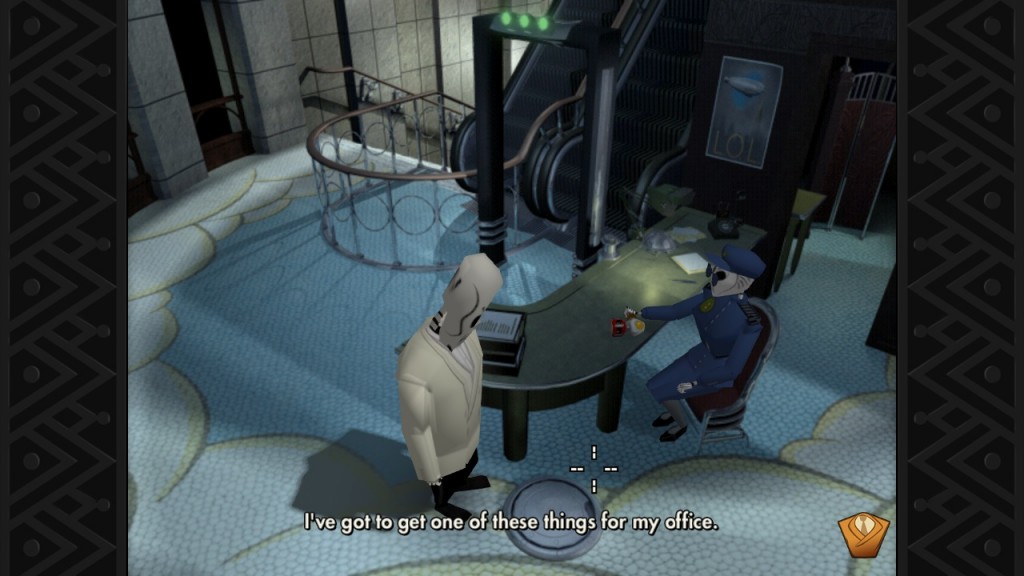 Later on, you read a memo scolding the employees of the station for using the contained-detonation chamber to crack open walnuts. Ha ha! This is a funny game. Until you realize that you’re supposed to give Carla an unopenable cigarette case (whose contents are a mystery, because you looked down at your bowl of ice cream at the moment the case was briefly opened during a long-forgotten cutscene), pass it off as a bomb, and have her put it into the floor safe so that she can…force it open with a controlled explosion? Isn’t the purpose of a contained-detonation chamber to contain something that is going to detonate? I don’t trust any cigarette case that explodes when you pretend it’s a bomb, nor do I trust a police force that installs a device that makes things blow up right in the middle of a walkway. Nor do I trust Manny anymore, because he tells me the door to the chamber is locked, but Carla flips it open right quick without fumbling for a key.

I’ll spare you the one about the ship with the portholes you can reach right through, because it’s probably unreasonable to expect that a ship would have glass-covered windows on its lower decks to make it watertight. And nevermind that Manny almost never wants to use his scythe on anything because it’ll mess up his blade, yet he freely uses it to PULL AN ANCHOR HEAVY ENOUGH TO CLEAVE A SHIP IN TWAIN without so much as a grumble or sigh. Oh, and let’s gloss over how you’re supposed to avoid knocking over an intricate maze of delicately balanced dominoes by having Manny’s compatriot Glottis violently throw up all over them. 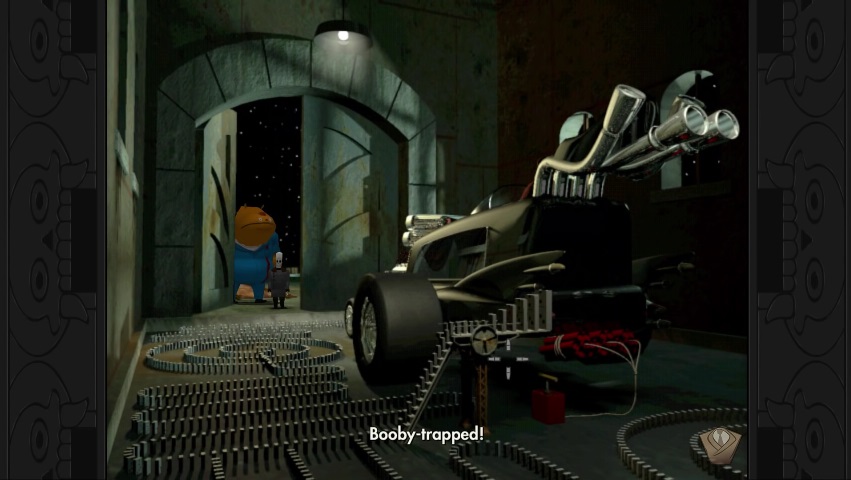 I might add that the characters probably can’t even see that this is a booby trap from where they’re standing.

Grim Fandango‘s lack of attention to detail isn’t some editorial oversight; it’s a serious recurring issue that points to thoughtless design, and one that extends to the story as well. Most notably: If Manny truly cares about finding Meche, why does he spend a YEAR loafing around Rubacava when he could be rallying search parties and putting up flyers? He knows firsthand how dangerous the wilderness is, and his whole mission is to rescue her! When she finally does show up, the only reason Manny doesn’t miss her completely is because he happens to go outside at just barely the right time. So the whole plan was to wait for some sort of deus ex machina to intercede!? That soured the entire game for me, needing to shut off my brain and accept that of course this is the logical progression of the plot.

Like my brain, I ended up shutting off my speakers. In addition to preying on the player’s forgetfulness and inattentiveness, “the greatest adventure game of all time” routinely destroys the player’s concentration with audio that approaches Mega Man X7 levels of terrible. If you’re looking for a quick trip to the hospital for alcohol poisoning, play the “take a shot every time Glottis makes a loud noise while you’re trying to solve a puzzle” game. One of the most poorly explained and convoluted puzzles in the game involves a machine so obnoxiously noisy that even the characters remark about it. One puzzle has you wandering around in circles until you figure a way off the screen, all the while suffering the unskippable sonic stylings of a singing seaman who really puts the “rend” in “rendition”. One puzzle has a frightened florist spouting a constant stream of paranoid gibberish and talking over himself to comment on everything Manny says aloud. Did anyone with ears playtest this game? 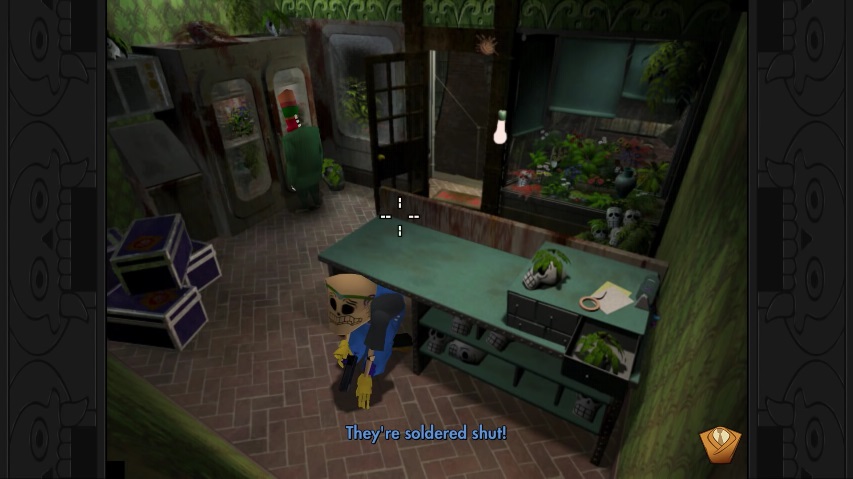 The real shame about that last challenge is that it could have been a brilliant meta-puzzle. There’s some entertaining breaking of the fourth wall, with the dialogue only becoming grating because there’s not enough of a pause between lines, and the whole setup makes it sound like you need to figure out how to make Manny say something that the florist won’t interpret as a death threat. Pity that the solution is uncovering a concealed bell (which you don’t even know to look for) so that the florist—who’s seen your face and is convinced you’re trying to kill him—will mistake you for a harmless customer. Because bells only jingle for people who don’t plan to kill you.

I think the only debt the adventure game genre owes to Grim Fandango is for lowering the bar for what qualifies as a classic.

We here at GameCola's crack news team are dedicated to searching far and wide for videogame news, but today I'll be daring to traverse the very time-space continuum to bring you news from several year