Nostalgia is a very powerful force. It’s what makes Thundercats seem like one of the awesomest shows ever when you think back on it. Then you watch it again, and the pitiless sledgehammer of objective reality knocks you upside the face and makes you realize that it is not only poorly written and the voice acting is horrible, but it seems to have served as the archetype for something that didn’t really have its renaissance until the Internet popularized fanfiction years later—homoerotic furries.

The lesson here is that nothing turns shit into pure, golden sunshine quite like nostalgia, and that goes for videogames as well. Nostalgia in the videogame community is what causes an otherwise sane individual to say “Yeah, I could play Mass Effect 2 or Portal, but I’d rather play Bubsy! Remember Bubsy?! Oh man, that cat is so witty, he’s got an exclamation point on his shirt so you just know he’s trouble!”

Now, normally I intend to use this column to take cheap jabs at bad old videogames, but I figure I’ll start things off big this time and attack a game that is not only not considered to be a bad game, but is considered to be a classic, largely due to nostalgia: Castlevania.

At the time of its release Castlevania was a pretty groundbreaking, even epic, game. You traverse a huge castle filled with zombies, monsters and hellspawn fighting everything from Frankenstein’s monster, Death, and Dracula himself. The question is, however, does the game hold up today? In a word: no.

Give the game a playthrough now and you’ll realize that the graphics are sub-par even for the time period. That can be forgiven, but much more importantly, the whole thing feels very rough—especially the controls. Simon moves around with the fluidity of a sack of bricks, which would make any game frustrating, but in a game made to be very difficult, like Castlevania, it’s downright maddening.

Still not convinced? What does it say about the franchise that no real Castlevania games have been made since the mid-’90s? Sure, there’s been Symphony of The Night, Dawn of Sorrow, Lament of Innocence, and other morosely titled sequels that sound like possible HIM song names, but if you play them you’ll see that they’re all based on Metroid, not the original Castlevania. And for those of you who may be citing the N64 Castlevania or the Wii’s new Castlevania: Judgement as a “real Castlevania game”, I cordially invite you to go get a full-time job as the lead product tester at an AIDS factory.

So, if Castlevania doesn’t pass the test of time, then what does? Well, how about Ninja Gaiden, for a start. Between the concept of destroying light sources for items and that dead giveaway life bar, it’s rather obvious that Ninja Gaiden ripped off Castlevania something fierce—so why is it still fun? It holds up today simply because it took everything that was weak about Castlevania and fixed it—along with adding a few other perks. Simon Belmont moves like Steven Hawking at a squaredance; Ryu Hayabusa moves fluidly and responsively. While I was trying to get Simon to climb stairs properly instead of shuffling back and forth like a moron, Ryu was jumping around, sticking to walls like some agile fly-man. 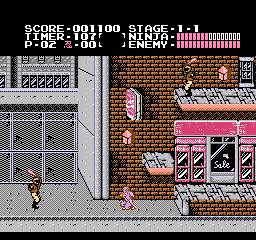 Overall, it would be stretching to call Castlevania a downright bad game. It was an epic adventure that introduced a lot to the platformer genre and presented a dark storyline to the usually cheerful games of the NES. Despite Castlevania not being awful, it is most certainly overrated and, considering the tens of thousands of classic games and great new games coming out all the time, there’s only one real reason to dust off that old Castlevania cart—nostalgia.

As I edited this diary I've noticed they're getting longer and longer. It can only be due to more gameplay, further evidence that the hook is in place and I'm being dragged in. I think about everythin