Warning: This article contains references to the Nancy Drew series that will most likely confuse non-Nancy Drew fans.

Nancy Drew: Secret of the Scarlet Hand is not my favorite Nancy Drew game, but I have to admit that it is one of the more important games in the series, setting most of the standards that the series follows to this day.

Scarlet Hand is the sixth Nancy Drew game. Like with most series, Her Interactive has hit upon a successful formula for their games, following general rules like, “there must always be four suspects”; “Nancy can always call her friends Bess and George for hints”; and, “there is always a locked door you have to find the key for.” Starting with Secret of the Scarlet Hand, the series pretty much sticks to this formula and doesn’t try any major innovations until the game screen changes in Secret of Shadow Ranch.

Today, sixteen games later in the series, it becomes obvious that many of these general rules have their origin in Secret of the Scarlet Hand. This game is the first to have the to-do list, as well as the written summary of the plot/clues. It came up with the “find all six special objects” metapuzzle that appears in most of all the other games.1 It’s the first game to include a trailer for the next game before the ending credits. It’s the first game with the Hardy Boys, Sonny Joon and Koko Kringles, Prudence Rutherford, and Krolmeister. And while it’s not the first game to include multiple locations, the ability to travel between various places becomes a standard of the series from here on out. 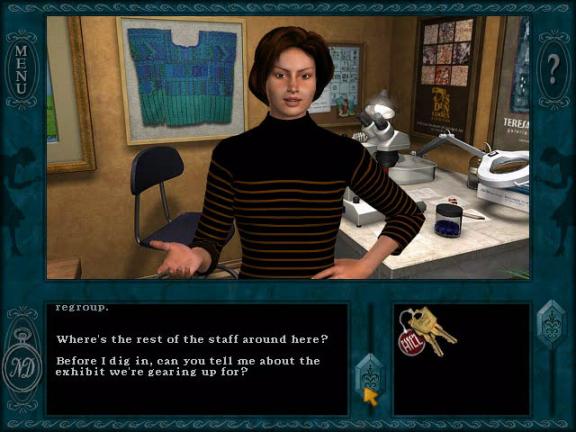 Now, I prefer this game’s predecessor, The Final Scene, just because my organized self loves how the game is split up into three convenient parts (and that kidnapping plotline! DRAMA! And Nancy jumping into Sassy Detective Mode, coming up with all sorts of great one-liners! And Brady Armstrong is—wait, wrong review). However, I cannot deny that Secret of the Scarlet Hand is spectacular. The mystery is tip-top, and whenever it starts to seem that the plot has slowed to a complete stop, they throw a huge plot twist from out of nowhere. BAM! Henrik gets thrown down a flight of stairs! Joanna gets fired! And Poppy Dada is…POPPY DADA! Oh man, she’s so cool that I friended her on Facebook. Keep drawing, Poppy!

One of the highlights of the game is calling people. Her Interactive went above and beyond the call of duty when it comes to phone calls in this game. The dialogue is all entertaining—so much so that I saved the game and replayed through the phone calls to hear the different dialogue options—and the voices are just plain fun to listen to. What should be a simple, boring challenge of “Call person X to learn information Y” ends up being surprisingly awesome. The only drawback is that you have to switch back and forth between the two phones in the game, because Nancy can’t call all of the characters from one phone, which almost always confuses first-time players.

And that overarching plotline of getting all six jade carvings! It’s really satisfying to see those six subplots come together so well, what with the exciting “you just found a jade carving” music, and the 3D “put the pieces together” puzzle. It’s almost as satisfying as seeing the villain scream, “Confound you, Nancy Drew!!!” after realizing that Nancy has tricked him or her. That still sticks out in my mind as one of the best endings to the series.

Actually, the villain him/herself stands out as a great villain. I don’t want to spoil the culprit’s identity, but for this game, the culprit is well-chosen. At the end of most Nancy Drew games, when the culprit appears, it could pretty much be any of the suspects who appears before Nancy. You could easily see Jacques, Dexter, Hotchkiss (okay, maybe not Hotchkiss) or Lisa appear as the villain at the end of Treasure in the Royal Tower; they are all interchangeable when it comes to the villain role. In Secret of the Scarlet Hand, however, I cannot see anyone else being the villain besides [name deleted]. The culprit in this game is just that much of a perfect fit. 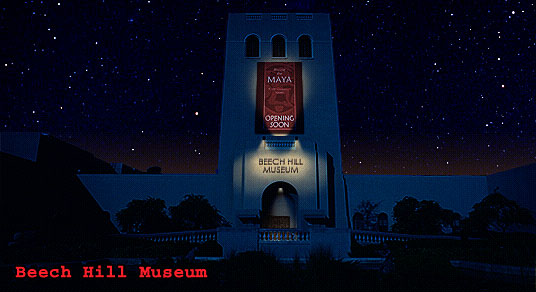 There are a lot of great things about this game, but it’s not perfect. My two issues with the game are the phone call section and the educational section. Like I said earlier, the phone calls in this game are great, but there’s a stretch around the middle/end of the game where you have to go through 15-25 minutes of doing nothing but making phone calls. It’s a little too long for my tastes, and the game really should have spread them out a bit more instead of lumping them together at that part of the game.

The educational section is a bit too long for my tastes, too. The game takes place in a museum about ancient Maya culture, so Nancy has to go through all the exhibits and learn a lot about the Maya. And you do learn a lot; I now know the ancient Maya numbering system, and the Maya calendar system (something which people are obsessed with today, for some reason). There are matching puzzles that force you to connect Mayan glyphs with their translations, and there are even quizzes in this game, where you get to answer questions like, “What is a language spoken in modern-day Mexico?” Answer: Nahuatl. If you go through all of the museum stuff at once, it’s sort of like edutainment overload.  Fortunately, you can do the exhibits challenge at the beginning of the game and the pyramid challenge at the end; that way, the educational parts are spread out, instead of being lumped together like the phone call section.

All in all, Nancy Drew: Secret of the Scarlet Hand is a very good game. It might not be a home run, but it is definitely a triple with at least one RBI attached. Even eight years later, it’s an enjoyable experience, and it’s no surprise that this game set some of the series’ standards, which persevere to this day.

1. I guess the “find all three medallions” challenge in Treasure of the Royal Tower technically counts as the first time you have a “find all the special objects” challenge, but I don’t count it as such because Nancy never searches for the medallions (she just finds them over the course of the game), whereas in Scarlet Hand, she knows that she must find all six jade pieces and goes searching specifically for them.

Hello, Sodies. It's been a while. What are we doing here now? Hey, new digs! Eh, I kinda miss the old place. What can I say, I like blue. So what're we talking about? Scoring systems? SCORING SYSTEMS!