Nancy Drew: The Creature of Kapu Cave is sometimes pegged as the worst game in the entire series, for these reasons:

So, if you like short mystery games with only a semblance of a plot, this is the game for you. Thus sayeth the cynics. 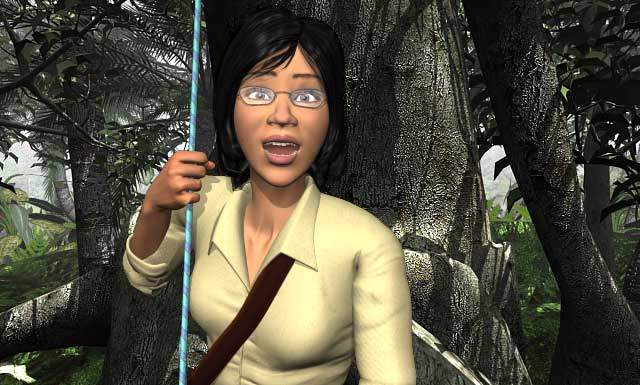 The plot of the game is that Nancy goes to Hawaii to help a quirky entomologist named Dr. Kim. The Hardy boys are there, too, doing a background check on a local surfer girl. And there have been sightings of Kane Okala, a minor Hawaiian god who is destroying the local pineapple crop. Could it be that someone is pretending to be Kane Okala in order to carry out nefarious deeds?

The plotline about Kane Okala, who I can only presume is supposed to be the titular Creature of Kapu Cave, gets dropped ten minutes into the game. The Hardy Boys’ investigation, while interesting at some points, is pretty much completely optional. In fact, when I tried to follow through with their investigation, I was unable to trigger the “confront the criminal” scene, which stinks because that’s basically the whole POINT of investigating crimes, am I right?

In fact, most of the plot of this game is entirely optional. And unfortunately, it’s often hard to trigger certain plot points because following through on their subplots is optional. So, far too often, you’ll end up with a bunch of unrelated plot points that don’t get explained and/or don’t seem to be relevant. Only when you replay the game a couple of times and choose different dialogue options will you be able to get an idea of how all the various plots are related.

The ending of the game amuses me, because it tries to wrap up all the various plotlines in as little time as possible. Personally, I like the idea of an ending that says, “You won the game! Congratulations! Here’s the plot as a reward.” In fact, if Final Fantasy games did this, I would be pleased as punch, because they do not contain discernible in-game plotlines. 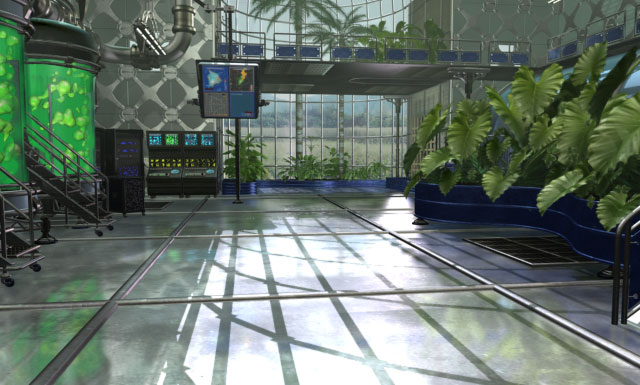 Okay, that’s enough bad-mouthing the game. What good things can I say about it? The characters are pretty popular with everyone. Dr. Quigley Kim is loads of fun. Quirky is always a fun personality trait, although it is immensely overused in children’s entertainment nowadays. Dr. Craven, whose main personality trait is angry, is also a fan favorite. There’s something oddly enjoyable about hearing Dr. Craven blow his top and yell like a maniac. The least popular character is surely Big Island Mike, who is personally responsible for 80% of the filler material in the game, but it’s a mark of good characterization that he can consistently get that negative reaction from most gamers.

As for the graphics, yes, it’s obvious that a new animation team was working on this game, but the graphics aren’t really all that bad. In fact, a lot of the time, the graphics are very good. The Hawaiian scenery, in particular, is so beautiful that I can’t help but think they used real pictures from Hawaii.

The problem, however, is with the character animation. From what I can tell, there are two different models for each character: a full-body model and a closer-up shot. The full-body models look just fine. The closer-up models? Not so much. If they stuck with the better models the whole time, nobody would have complaints about the new graphics. Or at least, people wouldn’t complain as much.

People would probably still complain about the game’s length, though. As I said earlier, it’s a pretty short game. Most of the other games in the series are twice as long. The worst part is that even though the game is short, it still feels like it has an overload of filler content that artificially extends the game’s length. For example, you have to do a five-minute fishing challenge—a minigame that is copy/pasted from Nancy Drew: Secret of the Old Clock, by the way—three or four times over the course of the game. Then there’s the frass analysis challenge, which also takes up fifteen to twenty minutes, a lot of which are spent going back and forth between Quigley and her base camp. True, these aren’t any worse than similar challenges in other games, but maybe because this game is so short, they just stand out a lot more. 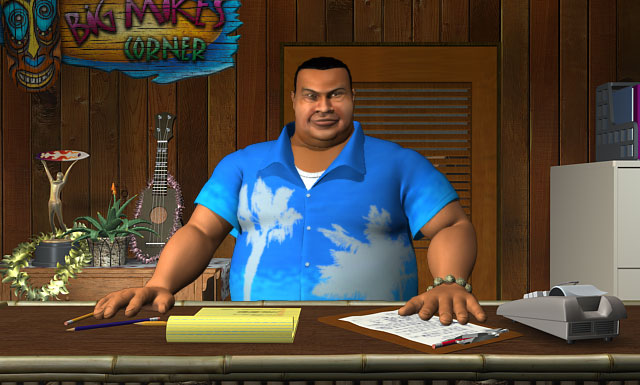 Is this really the worst the series has to offer? I’m hesitant to say yes, but there are a lot of reasons to not like this game. It’s too short, the plot is poorly presented, and I’d like to be able to skip over some of the longer, repetitive tasks. On the other hand, the characters are well done, and the scenery looks great, so it’s not a total disaster. It definitely has its moments.

If you’re only going to play one Nancy Drew game in your lifetime, don’t make it this one. But if you want to enjoy all the series has to offer, don’t skip over it, either. Aloha!

Recently, I was reading an article about the 100 Lamest Gaming Industry Clichés, and I noted that I have used about 80% of them over the course of all my previous reviews with GameCola. This is the