(To catch up with the story and read previous editions of “Quantum Geek,” click here.)

The mansion loomed high above the town, implying both authority and watchfulness with its presence. Once again Tom caught the faint melody of steel drums on the wind, and wondered where it was coming from. In the other game worlds he had visited, the games’ music had always been present, but it was typically very artificial sounding and followed him constantly, as if an unseen audio speaker was always ten feet behind him. Here, the music faded in and out, seemingly a natural part of the world.

Stopping to think, it occurred to him that, with each new game he visited, I.D.E.A.S. had created increasingly realistic situations. Sure, the rules of the games still applied and they all still resembled their original versions, but Tom had noticed how polygons had been smoothed out in some areas to effect a more natural appearance, and NPCs added new phrases and inflections to their pre-established dialogue. Tom wondered what it all meant and hoped it was not the beginning of another awful surprise. 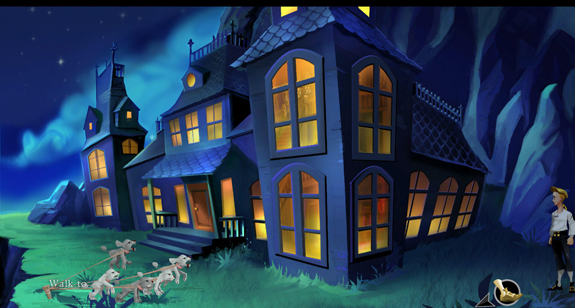 Tom approached the mansion, carefully sidestepping a cadre of angry, yet completely avoidable (as long as one was careful where one stepped) poodles, but as he grew closer a large, bald man exited the edifice, cursing and mumbling under his breath. Upon seeing Tom, he straightened his back and stared angrily at him.

“Ah, you must be the Guybrush Threepwood I’ve heard so much about,” he said, his words dripping with loathing.

“Uhhhh…yeah, that’s what they call me.” Tom had forgotten where he was for a second, and had almost given his actual name. After the encounter with the creepy lady earlier in the town, he was keen not to divulge that information easily. “Yup, plain old Guybrush Threepwood, out for a nighttime stroll. And you are?”

“Fester Shinetop, sheriff of Mêlée Island and personal guard for governor Elaine Marley. And what, exactly, brings you to the governor’s mansion on your stroll?”

“Oh, you know, just taking in the sights, admiring the post-Blackbeardian architecture. That sort of thing.”

Shinetop looked skeptical, but he seemed to buy Tom’s explanation. “Very well, Threepwood. Keep your nose clean—I’ll be watching you.”

With that, Shinetop trudged off, while Tom spent a few moments making some random, yet highly audible, comments regarding the mansion’s “buttresses” and “neo-classicism,” despite having no idea what either of those terms meant. When his interrogator was out of range, Tom proceeded to the front door of the mansion and quickly slipped inside. 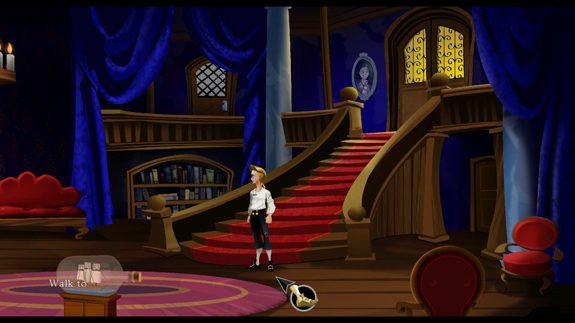 “Helloooooo?” yelled Tom. “Is anyone here?” Tom received no response, so he proceeded to look around. The mansion was tastefully decorated, resembling colonial-era estates that he had seen in history books.  A stack of documents on a nearby table caught his eye. Figuring that a little more information couldn’t hurt, he decided to inspect them.

Near the top of the pile, a few maps jumped out at him: one labeled “Mêlée Island,” and another “Tri-Island Area.” The Mêlée Island map seemed to be a map of the island he was currently on, while the other pointed out Mêlée’s position in relation to a larger chain of islands. Additionally, a few papers in the pile made reference to a “Monkey Island,” but they seemed to be filled only with vagaries and old stories. Using the laws of videogame logic, Tom deemed these to be the most important documents in the pile, and he promptly committed them to memory.

Tom called out once more, but when his entreaty was again met by silence, he decided to keep searching the mansion. Near the entrance he found an open door, but he found the room beyond it to be shrouded in darkness. Suddenly, Tom felt a shove from behind and fell into the inky blackness. He couldn’t be sure, but as he stumbled through the room, incidentally banging both shins, stubbing his left big toe, and picking up a small concussion, Tom thought he saw a yak, some gophers, and a staple remover. Suddenly, another shove sent him straight through an adjacent wall, back into the entrance hall of the mansion.

A woman’s face appeared in the hole Tom had broken through. “Now get the hell out of here before I have to kick your ass again!” she yelled.

“Tom? Oh, sorry man; I didn’t know it was you. Where the hell have you been?”

“Trying to find you. Thanks for the warm welcome,” he added, sarcastically.

“Hey, ever since we’ve gotten here I’ve had no less than FOUR guys come here to hit on me, not including that creepy sheriff. Violence seems to be the only way I can get them to understand that I’m not interested.”

“Fair enough. Have you spoken to Rick?”

“No, he hasn’t said anything since I got here. You?”

“No. Do you have any idea where we are or what we need to do?”

“Nope,” Tom replied. “So let me get this straight. We have no Rick to guide us, no idea what game we’re in, and no idea what we’re supposed to do. I’d say we’re officially boned.”

“Want to wander around until something happens?” asked Alli.

“Why the hell not? It’s not like we have anything better to do. Maybe we can find some alcohol while we’re at it.” Tom had no idea if digital booze would have the desired effect, but at this point he figured a stiff drink couldn’t hurt. As he and Alli turned to leave, someone knocked at the front door.

“Dammit, it’s probably another would-be suitor,” said Alli. “Let me just rough him up a bit—then we can leave.” Alli opened the door to find Fester kneeling on the ground with a ring in his hand. “Oh for the last time, Fester, I will NOT marry you! Try to get it through your thick, hairless skull!”

“Aye, I was afraid you’d say that, and now that I see I have competition…” Shinetop eyed Tom, “I’m afraid that I’ll have to take more drastic measures.” Shinetop stood up, and as he did so his skin and clothes seemed to evaporate. Left behind was the pale blue figure of a fat, bearded pirate, complete with a sword and a tri-corner hat emblazoned with a skull and crossbones. “If I cannot have ye willingly, I’ll take ye by force!” Alli started to say something, but before she could finish her intended expletive the figure swept her up and began running to the cliff. “By the end of the day, you’ll be the bride of the dreaded Ghost Pirate LeChuck!” the figure triumphantly shouted. 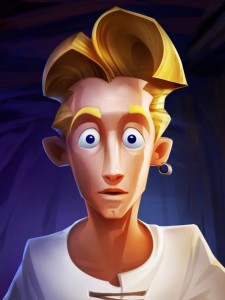 Much to Tom’s horror, the ghost pirate leapt over the cliff with Alli in tow, seemingly to their deaths (or perhaps undeaths). Upon running to the cliffside himself, Tom saw that they had landed safely on the deck of a ghost ship, where Alli was soon tied up by a pair of ghost pirate crewman. Still, Tom couldn’t help but feel that their situation was, in at least one sense, relatively fortuitous.

“Hey Alli, guess what?,” he exclaimed. “I think we found the plot!” Alli began to scream something, but she was quickly cut short by a gag being placed in her mouth.

Tom didn’t catch what she said, but he chose to believe that she was expressing happiness over their discovery.

Xenosaga, to sum it up, is a role-playing game within a sci-fi movie.