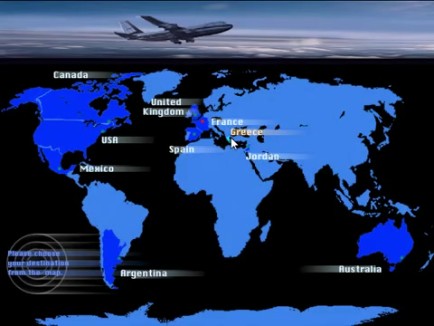 If you like videogames with long names, you’re in for a treat. Today, I’m talking about Where in the World is Carmen Sandiego?: Treasures of Knowledge. It’s a 2001 remake/re-imagining of the early ’90s Carmen Sandiego computer game series. At least, it counts as a remake of the series if you ignore all the other Carmen Sandiego games that were made after 1992. Since GameFAQs doesn’t have a listing for most of those games (or this game, for that matter), I’m pretty sure they don’t exist.

The original Carmen Sandiego games are puzzle games, where you chase Carmen through a series of different locations. Every location has three clues for you to look at, clues like “she went to the country with the Giza Pyramids,” so you can figure out where to go next. Go to every place the clues tell you to go to, and eventually you find the bad guy whose name is a pun like Yul B. Sorry. Repeat 100 times until you catch Carmen.

Treasures of Knowledge is an adventure game, but despite the change in genres, it tries to stick somewhat close to the original formula. You still have to chase Carmen through a series of different locations by following a series of clues, but now there are a lot more things you can do in those locations. Yes, each location now has about ten things to do, not just three. True, the ten things to do are all really simple things like “watch a cutscene,” “solve a puzzle,” and “learn an educational fact,” but hey, it’s more to do! That’s good, right? 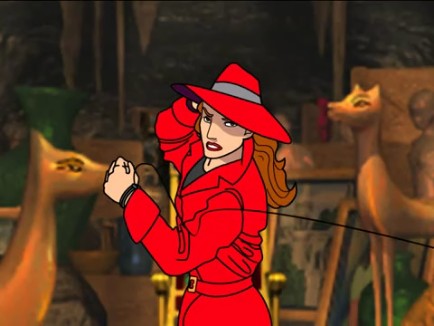 The cutscenes with Carmen Sandiego are the best part of the game. All throughout the game, she leaves video messages for our heroes, just to mess with them. “Hello, ACME losers! Looks like you found the clue that said to go to Canada. Well, guess what? I planted that clue to lead you down the wrong track! Ha ha ha ha ha ha! Hope you enjoy failure!” Oh, that tricky Carmen Sandiego. She is worth the price of admission, let me tell you.

The two main characters are ACME agents Jules Argent and Shadow Hawkins. Jules is the smart one, and Hawkins is the lovable buffoon who provides most of the comic relief. Jules was Carmen Sandiego’s partner, back before Carmen became a master thief (drama!). Together with the Chief—based off the Chief from the original game show—our heroes want to recover the various historical artifacts that Carmen has stolen. It’s not the most complicated plot ever, but there are a few twists and turns as our heroes try to figure out what Carmen’s master plan is. (Hint: it may or may not involve the game’s title, the Treasures of Knowledge.)

The characters are pretty basic stereotypes, but hey, it’s a children’s game. They don’t need to have any major character development. They just need to be characters who are entertaining and/or not incredibly annoying. True, the characters can get a tad tiresome when they start quoting educational facts at each other at length, but overall, they’re good characters, and I liked them just fine.

There are eight levels to the game, and each level is about twenty minutes long, which seems reasonable for a children’s game. Each level has about six different locations that you can travel to. The locations tend to be a mixture of 3D backgrounds with 2D characters or items, like this: 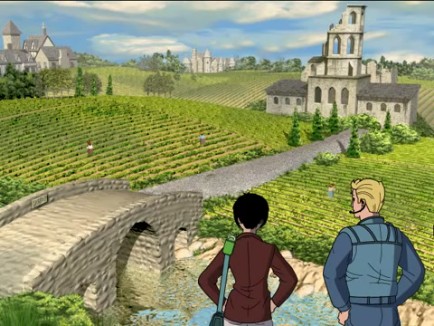 As an adventure game, though, Treasures of Knowledge is almost too simple to be a challenge; you can figure out how to solve most of the puzzles just by looking at them. Still, this game was a pretty smooth transition from puzzle series to adventure series; it’s definitely an accomplishment that they were able to make it a legitimately good game, and not a genre-confused mess. It’s not the best game ever by any means, but it’s an entertaining enough way to spend two hours.

I was hoping to see another Carmen Sandiego adventure starring Jules and Hawkins, but sadly, the adventure game genre died shortly after this game was released, so no sequel was ever produced. In fact, this is the last Carmen Sandiego game ever made, save a disastrous 2004 platformer that I shall not speak of. All things considered, Treasures of Knowledge is not a bad note for the Carmen Sandiego series to end on, but it is kind of bad that the series had to end.

Ah, Carmen Sandiego. We hardly knew ye. Or at least, we hardly ever knew where you were.

Over the course of our relationship, Mike and I have been through many compromises, both large and small. For the most part, these compromises simply serve as necessary evils that ensure our harmoniou ...