With the good comes the bad; am I right, folks? This is a follow-up to my previous “Great Moments” article, but this time, I’m sharing some moments in RPG history that left me wanting less, and put that bad RPG taste in my mouth.

A Bicycle Built for One? (EarthBound)

Most RPGs incorporate some means for your character to move faster than just the standard walking speed, whether it be Pegasus Boots, Spring Shoes, holding down the B button, or in the odd case of Secret of Mana, you can run fast, but only in a straight line. EarthBound, unfortunately, lacks any fast-movement ability in the vast majority of the game.

When Ness is all by himself, you can come across a mighty fine bicycle. You see, EarthBound is a pretty unique RPG in that it takes place in a time period where, when you walk on stairs, you automatically go up and down them. You get modern things like pizzas, bank accounts, and fuzzy pickles. Ness can also speed up his travel-time by riding around on a bicycle. But once Paula joins him…whoops, the bicycle is not built for two. You can’t even ride it when your other allies are ghosts! Now, I know you can get teleportation skills later in the game, but you can’t use those just to get around town. Thankfully, the game’s Japan-only sequel, Mother 3, added a run ability. 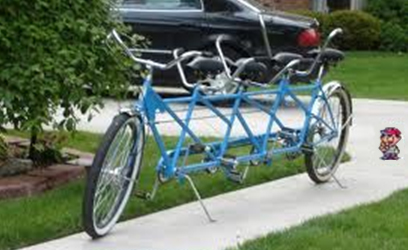 This is what I’m talking about, but then again, the bicycle was stored in Ness’ backpack somehow.

I Have to Do It Alone? (Secret of Evermore)

Secret of Mana was, I think, my first RPG. I was later saddened to find that hardly any other RPGs were action-RPGs, and that fewer still were multiplayer. I know Final Fantasy VI has a co-op option, but that’s only available when you’re in battle. It simply isn’t a party game. Secret of Mana, however, allows for up to three people to throw down rabites cooperatively in the Mana world. It was a great way to exercise your battle skills together.

Secret of Evermore came out two years after Secret of Mana in the USA, and I thought it would be more of Secret of Mana, that I could play forever with my brother. Oh, how wrong I was. As it turned out, Secret of Evermore is strictly a single-player game, despite the fact that it has two playable characters throughout the entire game, one of which is a dog. Some may argue that the dog is limited in that he doesn’t have magic, but the boy from Secret of Mana doesn’t have magic, either. Hell, the dog even has armor to equip and can charge up his attacks, so why can’t a person play as the dog? The game even has puzzles where the boy and the dog have to split up to help each other advance through part of a dungeon. Also, the dog changes form as you go to different time eras, including a flying toaster that shoots laser beams! How awesome is that? Well, you’ll have to just tell your friends about it, because you’ll be playing this game by yourself, bub.

The Butler Did It (Secret of Evermore)

In GameCola Podcast #29, Michael Gray said that the “Secret” of Secret of Mana was that the butler did it. He was, of course, joking…unless he meant to say Secret of Evermore! The end boss is…the butler of the scientist who invented the machine that took you into the fantasy/movie world. You see, the butler had an intelligence chip installed in him that turned him evil. Sounds like a mix between Star Trek and Last Action Hero, right?

Well, who’d have guessed it? Considering that no other villains were introduced in the storyline…probably just about everyone. When I was playing the game, I think I just mindlessly went through and didn’t care about the story. 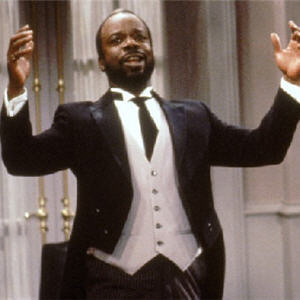 Jeffrey is out of control!

Even as a Jew, I always felt weird about laying down the hammer on Santa Claus, even as he was transformed as the mighty Frost Gigas. According to the game’s storyline, the Mananites stopped believing in Santa Claus, even though he is, in fact, real, so Santa steals a Mana Seed in order to create the world’s biggest Christmas Tree, and he accidentally turns into the Gigas. You can’t reason with the man; instead, you must hit him hard with fire magic until he turns back into jolly old Saint Nick.

The whole thing is confusing. Can we really trust Santa not to do something foolish like that again? Will people start believing in him again? Where is Santa’s sleigh? Since when can reindeer talk? 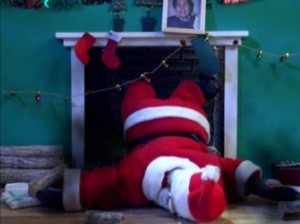 RPGs oftentimes require a great deal of tiring grinding, so sometimes people don’t mind taking a break for sidequests like the Chrono Trigger speed bike race, casinos, and things like that. Unfortunately, FFVI takes this to the extreme. The player is forced into a very awkward opera scene where you, as Celes, must memorize lines so that you can play the role of the real opera star, which results in you fighting Ultros for the third of 20 times.

Was this a necessary story arc? Do we really have to sit through a horrible opera where the singing is just random audio pitches, with no actual vocals? Furthermore, if you choose the wrong lyrics, you have to start the opera all over again (not as a Game Over; for some reason, the audience lets you take a break and start over again). At best, it’s an annoying memory puzzle, but really, it’s just a big steaming pile.

Chocobo Racing/Knights of the Round (Final Fantasy VII)

The Knights of the Round. The big summon that takes almost two minutes to finish firing. Remember, this was before Final Fantasy games had that “quick summon” option that allows you to skip the animation sequence. So you cast this thing, and you can easily go take a piss and come back and not have missed much. Furthermore, to get this summon, you have to jump through all these damn hoops. It involves you doing all this chocobo capturing, breeding, and racing to get yourself that gold chocobo. Not to mention, no one at the Chocobo Ranch seems to mind that you’re doing a large amount of inbreeding. Most RPGs have fetch quests, but they don’t take hours and hours like this one. At least Ocarina of Time’s quest nets you a sweet reward sword that doesn’t take two minutes to swing.

As mentioned before regarding Magus, acquiring Magus in Chrono Trigger seriously kicks butt. His variety of abilities and his mysterious aura and dark dialog (even more-so in the DS version) make him a welcome addition to the team. But he also did something horrible to our little green friend Glenn, aka Frog.

It should be pretty standard fairy tale stuff: Kill the wicked witch, and any hexes she placed on anyone are quickly released. If you go the revenge route and defeat Magus on the cliffside, why doesn’t Glenn revert to human form here? Perhaps Magus is still alive, or Magus’ spell has some backing with Lavos, so we only see Frog revert once Lavos has been defeated. Well, it’s just a bunch of frogwash…erm, hogwash, really. I suppose that the giant frog tech would have been silly with Glenn as a human, but give us something, man! 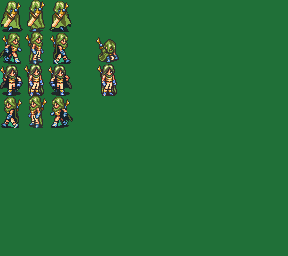 Glenn’s sprites in the game. They could’ve done so much more with them!

Happy birthday to GameCola writer, editor, and podcaster Elizabeth "Lizo" Medina-Gray! To celebrate, we're starting a new feature here in GameCola. (Actually, the two events are unrelated; I was just