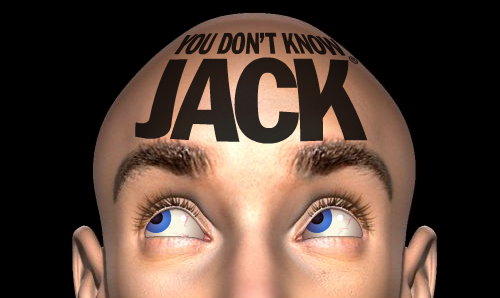 A new game in the comedic trivia game/self-esteem killer series You Don’t Know Jack has been announced for release this coming January. Details are scant, but Joystiq reports that it’ll be coming to all major consoles (and the Wii) (and the DS), that the 360/PS3 versions will have online multiplayer, and that classic modes like “DisOrDat” and “Jack Attack” will be returning.

In addition, a recent GameStop listing says that the game will be Kinect compatible on the 360, meaning that you should probably get it for the PS3, instead.

You Don’t Know Jack will drop on January 25. Be sure to catch it, or you really won’t know him. Or it, I guess. That always confused me when I was a kid.

Out of all the Intellivision games I picked up at a yardsale a few months ago, this one is my favorite.