In order to celebrate the release of Miles Edgeworth: Ace Attorney Investigations 2, Capcom has recently released a block-based puzzle game, based on the Phoenix Wright series, for Japanese cell phones. 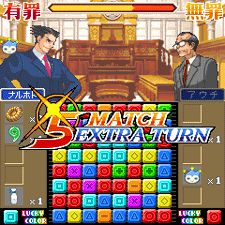 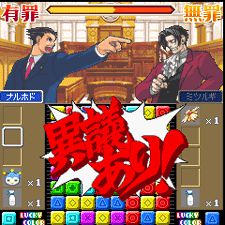 This appears to be a multiplayer game, where the two players take turns trying to get matches. When you get a match, your opponent’s life meter goes down, just like the life meter in the Phoenix Wright games. There are several items, all from the series, but I have no idea what any of them do.

As you can see from the screenshots, you can play as Phoenix Wright, Miles Edgeworth, or Prosecutor Payne (the person who only appears in the tutorial levels of the main series).

Breaking News: Nobody is ever going to play as Prosecutor Payne.

The game was released on February 1st, in Japan. There is no word yet on whether or not it will be released in the United States. It’s possible that it will be an add-on for the English version of the next Ace Attorney game, just like the Professor Layton cell phone game.