Speculation was rife when that first teaser image was unveiled. Strong Bad, Heavy Weapons Guy, Tycho Brahe and Max (of Sam and fame), together at last. Well, not really “at last,” because nobody ever even contemplated that these contemporary luminaries (and Max) would ever star in the same game. Immediately the Internet was abuzz with rumours and guesswork, frantically anticipating how this would work, how the characters could interact convincingly, what style of gameplay the concept would take on.

And then, it was announced—a single-player poker game. Ah-ha. Huh.

The disappointment was palpable. So palpable, in fact, that I was able to reach into my computer monitor and scoop it out, fashioning it into a crude waistcoat to wear to my functions. Like our collective expectations of Poker Night at the Inventory, it was cold, flimsy and uncomfortable. 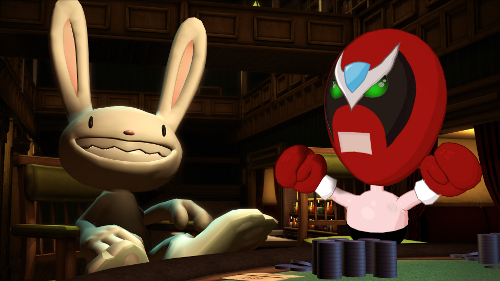 A single-player poker game. Really. Poker is not solitaire, guys! It is poker! Intrinsically, it require multiple players! And on Steam, a platform that makes online gaming ridiculously easy. It seemed absurd then, and it remains absurd now. I doubt it would have been particularly difficult to implement at the very least a basic online poker system. The complete exclusion of any multiplayer  component is insane.

Right, that’s the major complaint out of the way. Now for the myriad good stuff.

Poker Night at the Inventory plays a good game of poker. This weighs tremendously in its favour, as you may imagine. You play against the aforementioned HILARIOUS GAMING SUPERSTARS, listening to their quips and dialogues, of which there are sufficient numbers for the experience to be a lot less repetitive than it could be. It’s sporadically humorous and always engaging, though personally I find Max’s inclusion a bit surplus, since he’s not really very amusing. This is probably heresy to many, but Sam and Max have generally failed to elicit any more than a somewhat piteous smile from me, in a sort of “aw, bless, they’re trying to do jokes in a videogame” sort of way. Like when you see a wheelchair user attempting to traverse stairs. It’s nice that they’re trying, but sort of awkward and embarrassing to watch.

Tycho, Heavy and Strong Bad are great, thankfully, with plenty of much less forced chatter, which cleverly adapts to fit around your poker playing. For example, if Heavy and Tycho are engaged in conversation, and their turn comes up, they’ll announce their moves and then seamlessly return to the flow of dialogue. It’s remarkably well done.

Adding to this title’s appeal is the added incentive of “buy-ins”—occasionally, each character will “buy in” with their item of choice—for Tycho, a watch—and the player can then win it from them in-game. However, if you own Valve’s excellent online FPS Team Fortress 2 (and if you don’t, you are basically a bastard), you can then take these “buy-ins” into that game and use them to help you murder the opposing team.  It’s quite a major sales point, as TF2 items are quite a lucrative trading bonanza. I’d be willing to bet that tens of thousands purchased Poker Night, won the items, then never played it again.

Sadly, this is fairly reasonable. It takes a good amount of play to unlock the items, but then that’s it—you’re not going to get anything more out of playing against these admittedly appealing characters for fake money. There are unlockable tables and decks of cards, but who cares? You can’t kill people with them. 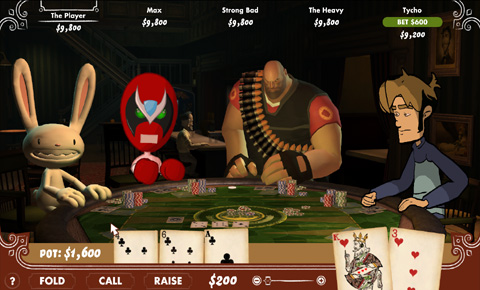 There are other, better, online poker sims out there, some of which can be played for actual money. The more serious poker enthusiast is going to want those instead. Poker Night plays a fair Texas Hold’Em, but that’s it. No game variations, and very little replay value besides some unlockable novelty decks and tables, but who cares.

Not Poker Shite, but hardly an Ace. Ha! Do you see? Because it is poker.

How could anyone hate this terrible game?