You know those moments on public transport when a greasy, fat, mentally ill lady waddles up the aisle and parks her massive arse on the seat next to you, causing your face to become pressed up against the window? You know when she starts talking loudly like she knows you, saying things like “I love your bag; where did you get it? It’s the perfect size to fit my dead cat in. Can I have it?” It’s during moments like these that I really wish I had a good game to play so I didn’t feel obliged to respond—nothing too complicated, just something simple and enjoyable to pass the time and discourage conversation without coming across as rude.

Well, I have found that game.

Sparkle HD is a beautiful little iOS puzzle game that I have been playing on my iPad and I am totally addicted to it, so much so that I have even started playing it when I’m not sitting next to potential axe-murderers on the bus. The concept of the game is not new—it is basically one of those shoot-coloured-balls-at-other-coloured-balls-until-they-all-disappear type games favoured the world over by bored housewives with bingo addictions. In comparison to the amateur efforts of some similar games, however, Sparkle HD is far superior—the punchbowl in a sea of turds, if you will.

The game begins with a short, slightly unoriginal storyline explaining that there is a darkness of some description falling over the land, and the burden to destroy it lies inexplicably on your shoulders. You are then asked to choose between Quest, Challenge or Survival Mode (for the purpose of this review we are going to go with Quest Mode), and, after being presented with an aesthetically pleasing map, you begin your journey at the giant mushrooms (oh God, I love giant mushrooms). 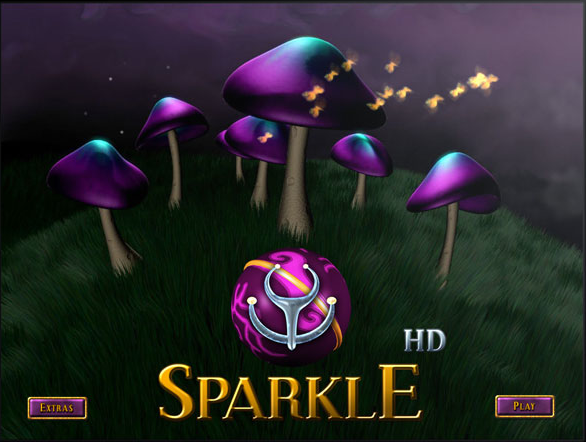 The levels consist of various spiral-shaped tracks on which coloured balls come rolling along toward a dark vortex (think Zuma, except not shit). You must avoid the vortex by firing coloured balls into matching groups of three, causing them to disappear. Throughout each level, little bonus icons appear which, if you can catch them, help you considerably. They enhance the balls in various ways, including slowing their speed, reversing their direction, and changing their colour.

As you work your way around the map you also receive numerous amulets, each of which possesses a magical ability. You can use them to improve your luck, increase your shooting speed, decrease the size of the orbs, etc. You can only equip one of these at a time, which makes things difficult for me, as it involves making a decision. 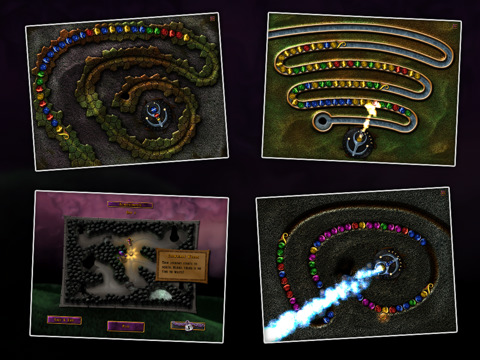 The relatively recent rise in popularity of these puzzle-type games has, in many instances, resulted in an increasing trend of developmental laziness. The graphics are often slightly blurred, too big for the screen, or presented in garish colours, with absolutely shocking attempts at dialogue. Sparkle HD has resisted the temptation to cut corners and proved that investing a little bit of time, effort, and (no doubt) money goes a long way. Being in high definition alone means that the ethereal, Pixar-type graphics are beautiful and make the game’s few flaws largely forgivable.

Aside from the immense graphics, the other thing that makes this game so enjoyable to play is its epic soundtrack. Composed by musical genius Jonathan Geer, it matches the visuals perfectly and resembles the soundtrack of one of my favourite movies of all time, Beetlejuice. That alone should make you want to buy it. You get a lot of levels for your money, too, and it takes a fair effort to complete the game.

The attention to detail in Sparkle HD means that, despite the superficial nature of this genre, you do feel like you’re playing a real game. It’s so well done that I became genuinely involved in it, even if it is quite repetitive and has a pretty sparse storyline. Take my advice: the next time you are being drooled on by an over-friendly schizophrenic in the waiting room of your doctor’s office, give this little peach a try—it could save your life.

The reveal of Tracer as a lesbian character reminded Daniel about the experience he had playing Coming Out Simulator 2014, as well as his ongoing journey getting along with English idioms.