If you were to walk up to a total stranger on the street and punch them in the face, they might become confused and visibly upset. But if you instead were to ask them to name a few addicting videogames, they might mention Pokémon, Tetris, maybe Animal Crossing or one of the Civilization games, and definitely EverQuest (or possibly that other no-name MMORPG that’s starting to gain some popularity—”War of the Wordcraft” or somesuch).

With the exception of the likes of Text Twist and Bejeweled, most fictitious strangers wouldn’t mention any Flash games unless they had recently played them. However, even though mainstream games get all the attention, I assure you there are plenty of Flash games out there that are every bit as addictive as Pac-Man, StarCraft, and Will Wright’s eternal classic, SimAnt.

If you haven’t guessed it already, this month’s “Flash Flood” is dedicated to reviewing Flash games that involve punching people in the face. There are a lot of good ones out there, if you know where to look. I’ve selected a few of the more interesting ones that—wait, did I say “punching people in the face”? Wow, I guess I did. All this time I thought I was talking about addicting Flash games.

5 = A personal favorite, and a completely acceptable substitute for eating.

4 = Great game, and totally worth skipping your weekly shower to play.

3 = Good; you should at least give it a try. Nobody’s gonna call you out if you keep playing this instead of brushing your teeth.

1 = Skip it. It’s more imperative that you give your cat a bath.

0 = Avoid at all costs. You’d be better off ironing your socks. While you’re wearing them.

Here’s a random sampling of some potentially addicting Flash games:

Description: Grab a paper plane and see how far you can throw it. Don’t feel overwhelmed; the game is much simpler than it sounds. It was originally designed for a promotional competition for Microsoft Flight Simulator X, hence the shameless advertisements you’ll see while playing the game.

Review: A game this simple shouldn’t be so fun. Playing the game consists of taking less than a second to drag your paper airplane across the starting line and then wheeeeee!!! watching it fly until it hits something. The graphics get a bit unflattering and monotonous after the plane goes out the window, but by that point you’re more interested in seeing just how ridiculously far your plane will go.

Verdict: 4/5: Oddly mesmerizing, and impossible to play only once. Just don’t tell the folks at 3D Realms about it or we’ll never see Duke Nukem Forever. [Editor’s Note: Duke Nukem Forever was released two years after this article was published.] 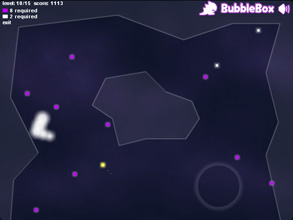 Description:
Launch comets at walls;
They bounce to hit the targets:
Fireflies explode.

Two chances per stage!
Murder enough fireflies,
And you will advance.

Review: On the plus side, there’s no time limit, you get infinite continues, and figuring out how to hit the required amount of fireflies per stage with just two comets is a puzzling challenge…for a little while. I lost interest because the later levels require way too much patience and luck to succeed, but maybe that’s because I put all my skill points into Whining and Complaining instead of Comet Hurling.

Verdict: 2/5: If you don’t mind an extremely high amount of trial and error and executing countless innocent fireflies, you might just get hooked.

Description: It’s exactly like Tetris…except the playing field is basically the size of Montana. Or your computer screen. Whichever is smaller.

Review: It’s more enjoyable to play around with Tetoris than to play Tetoris. You can have a lot of fun building cities and sculptures out of the falling blocks, and seeing how many hours it takes you to lose. The major drawbacks are that there’s no pause button and the blocks are reaaaaally tiny (at least on my monitor, which is the size of Montana).

Verdict: 3/5: Fun to try out, but probably will lose its appeal pretty quickly except with the biggest of Tetris freaks. You know—the ones who get pulled over by the cops for Tetrising while driving. 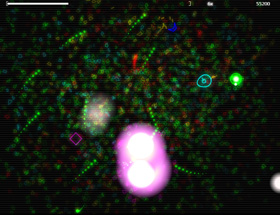 Description: Hordes of enemies are firing homing missiles at you! Dodge their shots and destroy your foes by turning their own projectiles against them! Then talk about this game using exclamation points!

Review: The concept is clever, the objective is clear, the controls are utterly intuitive, the learning curve is rather agreeable, and the game is forgiving enough for newcomers to have fun while still being challenging enough for experts to enjoy it. The game does get a little repetitive, and it could really use an Endless Attack mode, but it’s still a hoot.

Verdict: 4/5: Highly recommended. Just don’t tell your girlfriend about it, or else she’ll beat your high score on her first try and never let you live it down. At least…um…that’s what I’ve heard. 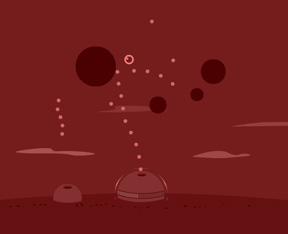 Description: You control a turret on Mars that is in constant danger of being destroyed by plummeting space rocks, which you deflect by firing on them. Choose between a stream of small bullets or one large bullet at a time, and collect powerups to raise a protective shield around you or build additional mini-turrets to assist you.

Review: Simple, yet beautiful. The game is physics-based, so it’s a lot of fun to watch both the falling space rocks and the bullets you’ve fired bounce in all different directions. The game is surprisingly relaxing thanks to infinite ammo and some very chill music (yeah, I used “chill” as a slang term; get over it), but the challenge continues to build the entire time. Perfect blend of strategy and skill.

Verdict: 5/5: I almost didn’t finish writing this column because of Red. Actually, I think I’ll play just one more round now, and when I’m done I’ll return to finish my

I think at this point, it goes without saying that dating a gamer requires a certain amount of patience. You need patience, for example, when he disappears into a game for hours on end, leaving you to ...