So it’s been sixteen years since Sonic the Hedgehog 3 & Knuckles. I thought that we’d moved on since then, had a couple of truly great games, and Sonic the Hedgehog was fine in three dimensions like all the other gaming mascots. Truth is, there are a lot of gamers who hate the 3D Sonic games, and because of them and their big stupid pie-holes, this game was made.

Sonic the Hedgehog 4: Episode I is a cringe-worthy circle-jerk marathon ganking copious old elements and even managing to mess them up in the process. Putting the “spit” in “spite”, this retro-fueled nostalgic rampage is great for the people who have actually forgotten what the older Sonic the Hedgehog games play like.

But I’m not going to go too much into how the physics are wrong. Sonic is much slower than he is in Sonic the Hedgehog 2, Sonic the Hedgehog 3 and Sonic & Knuckles.  The argument about Sonic never having been so fast is unqualified by the notable maximum speed increase between Sonic 1 and Sonic 2 . He is meant to be fast, and in this game, he just plain isn’t.

What bugs me more is the incredible amount of precision required, the same thing that ruins ‘Splosion Man. Besides the “horrendous pits of truly bottomless death” and “unexpected spiked-areas of frustration”, there are also the “fabled puzzle sections of despair”, which really, really kill the flow of the stages. I enjoy being able to hold right, occasionally jump, and complete a level with little effort. I can also enjoy the small puzzle areas with pushing blocks or riding on a lava river, so long as there is enough good action in-between. In Sonic the Hedgehog 4: Episode I, the flow has officially been trampled. 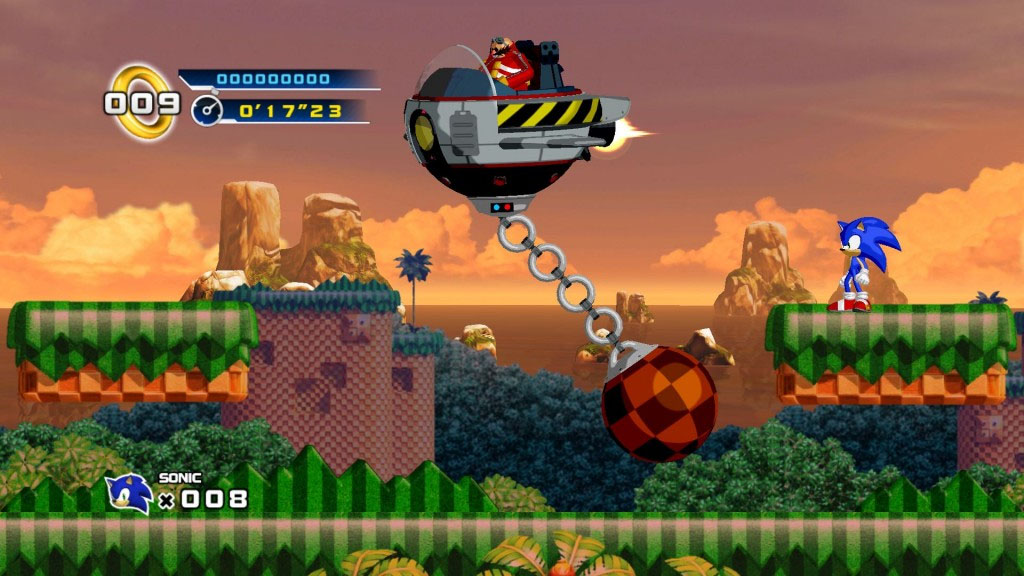 This boss battle is NOT as iconic as you think. Please stop re-using it!

The Homing Attack has been almost completely lifted from ROM hack “Sonic 1 Megamix“. Now all Dimps need to do is build upon that, and for Episode 2, try taking something else (light-speed dash, perhaps?). If they fix these damn physics and the broken collision detection, then they should be onto a winner.

But if they’re going to continue stealing entire zones, gimmicks and bosses from earlier Sonic the Hedgehog games, and continue to present Sonic with some of the worst physics ever, then they needn’t bother. I expected a better game than this mucus splatter to be coughed out by the developer of Dragon Ball Advanced Adventure. All that Sega then did was run their greasy middle finger through the up-chuck to spell “Sonic the Hedgehog” before it solidified.

But… It is a step in the right direction, even if only a small one.

Thank the powers that be for providing some proper new output instead of just re-releasing crappy old Sega games like Columns on the PC and iPod. As much as I dislike it, I know that a lot of people love it. If you’re a Sonic the Hedgehog fan, then you’ve probably already bought this and you might possibly have regretted doing so. For those who want to find out what Sonic the Hedgehog is supposed to be like, and if your heart is set on this game, then I can’t convince you not to get this. If you’re fine with the steep price that is.

I’ve been kinda going off of Sonic the Hedgehog recently and this is just the nail in the coffin for me, really.