A Gamer Girlfriend Guide to D&D
Part II: Getting Into the Game

Preface: This article is the second half of a two-part series on playing Dungeons & Dragons. To read the first installment in the series, please click here.

As with any other game, the first—and often most frustrating—step of playing Dungeons & Dragons is learning all the rules. This is most definitely not an easy task, since D&D rules are a bit more complicated than most other games. Remember in my last article, when I mentioned that the D&D rulebook was a “tome”? This was not, in fact, entirely accurate. The truth is that the D&D rulebook is actually several tomes. Apparently, the official creators of D&D like to revamp the rules every so often, and regularly put out new editions with formal changes and updates. Meanwhile, other people, whose identities I cannot comment upon except to say that they are most definitely not the official creators of D&D, are also putting out their own volumes. For example, the last several campaigns I have played in were based on a book called Pathfinder, which is an unofficial “streamlined” version of the Dungeons and Dragons 3.5 Edition Rulebook. But hey, it’s not so bad, right? At least you just have to deal with one book that serves as the bible for your campaign!

…Except, of course, for the supplementary volumes, of which there are many. The Core Rulebook is great for players who are “just starting out,” but if you really want to get in on the good stuff, you damn well had better see about investing in the Bestiary, the Advanced Players Guides, the Dungeon Master’s Guides, and the Lord-Knows-What-Else. On the plus side, toting all of these volumes to each and every gaming session does help to build your upper body strength, which is very important for things like opening beer bottles and feeding yourself snacks.

Let’s assume, for the sake of argument, that you have by now mastered enough of the rules to at least feign a passing knowledge of D&D. Once you have the basics down, the next logical step is applying them; and the only way to do that is by diving into the game itself. Lucky you!

OK, so this part was actually pretty scary for me at first. As gigantic as the rulebooks are, the one thing they don’t tell you is what you are supposed to do in any given situation. That is pretty much up to you, and it is majorly open-ended. I will readily admit that the sheer number of available options really freaked me out in the beginning. I was never really sure what to say, so I frequently just didn’t say anything at all. In fact, I actually began to dread the DM’s eternal (yet, in retrospect, fairly innocuous) question: “So…what do you guys want to do?” Instead of answering, I preferred to let the other guys in the party make the decisions, and just kind of assumed that my character followed along with whatever they were doing. This worked well for a while; but as you can imagine, it’s kind of hard to get much enjoyment out of a game in which you have the functional capacity of a burlap sack.

The first time I really did anything in D&D was during one game that took place about half a dozen sessions after I started. The situation in question involved a couple of goblins who had kidnapped a little boy and were holding him hostage in a treehouse. Although I still lacked confidence as a player, I soon found that my sheer indignance over such abominable treatment of a child (fictional or otherwise) overcame my natural reticence to act. I swung myself into the treehouse, successfully talked the goblins into handing over the kid, and encased myself and the boy in a protective Sanctuary spell while the other guys “took care of” (read: annihilated) the remaining threat.

After the game had ended and we were heading out to the car, I noticed a slight spring in my step that hadn’t been there before. I felt surprisingly good. OK, so a little scuffle with a couple of goblins half my size wasn’t exactly a huge encounter, but I still felt proud of myself. I had acted, and I had helped. For the first time, I felt like a valuable member of the team.

After that, it got easier to make decisions during the game. Granted, some of them didn’t turn out so well, but many did. For example, during my time as a D&D player, I have:

I do realize that these accomplishments are not actually as impressive as they would be if they happened in real life; but when things get going, the game often starts to feel like it’s real, and it’s easy to get emotionally invested. Granted, it may only last a short while; but in that moment, if only for a moment, what you do matters, and you end up feeling like a hero. It does make for quite the ego boost!

As you have probably ascertained by now, Dungeons & Dragons is at its core a game about role-playing; and playing the game well boils down to two things: how well you play your Character and how well you play your Role. Both aspects of role-playing are crucial to the D&D gaming experience. Without characters, for example, the story won’t get very far. Without people playing their designated roles, on the other hand, your party won’t get very far either, because chances are good none of you will last beyond the first couple of random encounters.

Whenever you begin a new campaign, your Character is the person you invent to take part in the game’s story. How much or how little time you actually put into creating your character is pretty much up to you, but you should at least nail down the character’s alignment, basic motivations, and rudimentary backstory. These fundamentals will be key to establishing how the character deals with any given situation.

Your Role, on the other hand, is less about overarching narrative arcs and more about basic tactics. There’s a good reason that parties of adventurers are generally composed of multiple character classes. A paladin is great and all, but a party of five or six paladins might run into trouble when required to do something other than “smite evil”. It’s much better to go with a balanced party, because all of the different classes have specific jobs at which they excel. Paladins smite, clerics heal, casters buff, bards negotiate, rangers track, and rogues do all the nasty little things that no one else in the party really wants to deal with. When you play your Role well, you become a valued asset to the team. When you don’t play your Role well, you are more likely run the risk of bringing the wrath of your fellow party members down upon yourself. This righteous fury can range from annoyed-but-good-natured ribbing to a swift and bloody end for your character at the hands of an enraged mob, so consider yourself warned!

The specific balance between Character and Role varies from game to game. Roles often end up trumping Characters as time goes on, largely because players who originally started out with the best of intentions eventually slip into “gaming” mode: that is, playing as themselves. Oddly enough, our party was rather unique in this respect, because the character-playing in our game actually got more intense towards the end of the game. Several of the players, including myself, ended up experiencing rather dramatic character development. My character, for example, transformed from a novice ranger to a full-fledged Duchess, bearing all of the weight and responsibility that came with the title. The rogue in our party shifted not one, but two character alignments over the course of the game, transitioning from Chaotic Good to Chaotic Evil as a magical Sword of Power slowly drove him mad. Our half-orc fighter began as a hired thug for the mob and developed into a respected guardsman harboring an unspoken (but not, perhaps, unrequited) attraction to the half-elf Duchess of Oriosa. Our sorcerer died and was reborn with new draconic powers. Our cleric…smashed a magic acorn. (OK, so not everyone achieved the same level of character development. It happens). At any rate, the “story” actually ended up trumping the “game”, and the whole thing made for a truly awesome experience.

Starting Over from Scratch

Of course, no matter how awesome your campaign is, you do have to remember that eventually, it will end. The storyline will wrap up, the DM will run out of ideas, and it will be time to move on to the next thing. No more leveling up, no more new spells or items, and time to say goodbye to all the sweet weapons and magical artifacts you’ve managed to accumulate.

This is always kind of a bittersweet moment, especially if the campaign has been going on for a long time and you’ve grown attached to your characters. Alas, there’s not much to do besides put away the character sheets, place your painted mini on the shelf, and rest secure in the knowledge that in a month or so, you’ll just be back where you started, with a new Lever 1 adventurer and a brand new campaign, wondering what’s going to happen next… 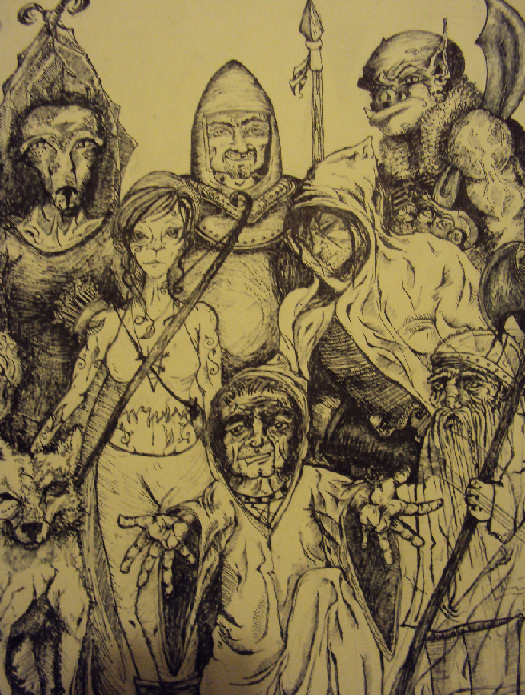 Does your favorite game series have too many unnecessary sequels? Have you or someone you love played an MMO? Well, have we got a podcast for you!