I recently came to the end of what turned out to be an extremely counterproductive, fairly expensive, and slightly embarrassing pastime. It all started shortly after I quit my job in December to become a freelance editor. I had been able to keep up a steady flow of projects, but I very quickly found myself with a great deal of unstructured free time on my hands. As it turns out, when you have eight hours a day to kill and there is no one looking over your shoulder, it’s kind of difficult to stay focused on your work all the time (who knew?). Despite all of my good intentions, I eventually started looking for ways to burn time between bursts of productivity.

In the beginning, most of my time-wasting activities involved trolling around on the Internet, reading books, and playing games on my DS. Unfortunately, it so happened this period also coincided with an unusual lull in my normal gaming activities. Nothing was waiting for me in our Gamefly queue, there were no new releases that I was interested in, and I was getting kind of bored with running through Mike’s classic RPG collection. I needed something new and different.

The answer to my troubles came from an unexpected quarter. A couple of years ago, I did a review of Avenue Flo, a point-and-click adventure game distributed by Big Fish Games. As a result, Big Fish Games managed to get hold of my e-mail address, and had been sending me periodic e-mail updates ever since. Up until this point, I had simply been ignoring them along with all of the other spam I get from Ann Taylor and Barnes & Noble; but on this particular day, a message in my inbox happened to catch my eye: 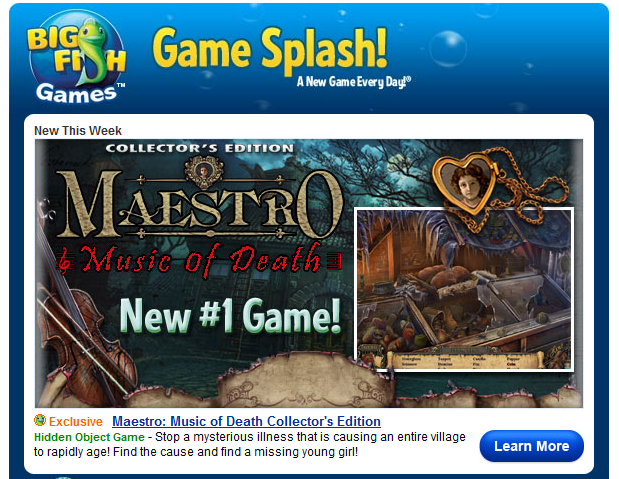 Huh, I thought. This looks interesting. I mean, hell, I like music. And I like mysteries! Not so keen on death, but hey, I’m REALLY bored. Why not check it out?

So I did. I quickly clicked on the link and followed through to the download page. Big Fish allows you to demo any game before you play it, so I downloaded the demo and dived in. Immediately, I was enchanted by the spooky mood, the evocative artwork, and the seemingly endless opportunities for puzzle solving. By the time I reached the end of the demo, I was hooked.

Looking back, that was probably where the downhill spiral started. For one thing, as much as I enjoyed playing the game, I found that it was over all too soon. Replaying it was no good (in general, puzzle adventure games are pretty crappy in terms of replay value); so in order to keep the fix going, I needed to get more. The other problem was that these kinds of games, individually, are relatively cheap. The average price for a game is about $6.99 (if you are in the super-special Big Fish Games Club, which I now am), and $13.99 for Collector’s Editions. Plus, once they had my information on file, buying and downloading games online was as easy as pie. Controlling my impulse buys, on the other hand…well, not so much.

What I discovered throughout the next month and a half was that hidden object games are to gaming what pizza and nachos are to food. They are addictive and tasty, but ultimately full of empty calories. In the course of a 3-4 hour playthrough, there is just enough time to solve the mystery, but no extra time for any substantial character or plot developments. The best they manage to deliver is a cheap thrill or two; and actually, a lot of hidden object games are either mysteries or horror/thriller games because those genres pack the most punch without having to dive into anything more complex.

This is not to say that they weren’t any good. On the contrary, I really enjoyed most of the games I played, and a select bunch of them I would even classify as excellent. These games in particular had solid, interesting (if simple) stories, beautiful designs, haunting music, and (importantly) puzzles that were both challenging and relevant to the plot. And there were so many of them! New games were posted daily, and for a while, it was all I could do to keep up.

Of course, no phase lasts forever; and (fortunately for me) my fixation with hidden object game downloads eventually did start to slow down. Part of it had to do with money (even at $6.99 a game, the cost really does add up after a while, especially if you’re running through them at a rate of one game every 1-3 days); and part of it was simply that I was ready to move on to my next obsessive, time-consuming phase. As of the writing of this column, it has been about a month since I purchased my last hidden object game; and although I do still try a demo or two from time to time, I think I finally have it beat. For now, anyway.

On a somewhat related note, it seems that I have managed to accumulate a sizeable collection of several dozen hidden object games on my computer. Barring any unforeseen events or circumstances, these games are probably going to sit on my hard drive until I a) forget how the puzzles work and play them again, or b) overcome my guilt about throwing away things I have paid for and delete them. In the meantime, if anybody happens to stop by our house and has a hankering to give any of them a try, feel free. At least then I’ll feel like I’m getting my money’s worth…

Sega released a teaser today for the newest Dreamcast game being re-released in HD. Names weren't given, but let's just say it looks like PSN and XBLA are about to get Beat. No? OK, how about "XBLA an