So here I am, tackling a giant. The game alone is quite huge in content and digital space, but that pales in comparison to the amount of words and opinions I have on the experience. Wrapping my written words around them seems like a daunting task. I’ll give it a try, though.

The Grand Theft Auto series covers a lot of territory, so I would find it very hard to believe that a lot of people are on the fence about it. You hear a lot of fanboys screaming about it and a lot of negative feedback about its adult content or simply because it’s cool to be anti-fanboy, but there’s not a lot of “meh.” I think I might be in the “meh” category. I definitely lean toward the fanboyism, as GTA has always been a good experience for me, and I get excited about another iteration of it, even if it is “just the same stuff,” which I don’t think it is. Yes, Grand Theft Auto IV is a visceral, potentially mindless, gun-toting romp through an almost uncanny representation of a real-life city, but what GTA game isn’t? Why would you deny yourself the potential fun of doing it again, in a new setting, with new toys and supper shmexy graphics? There’s nothing to complain about taking a solid game design and changing the locale. It’s nothing “innovative” or “new” in the sense of gameplay, but it’s FUN, and there’s nothing wrong with that in my book. Besides only observing that games from the same series have the same mechanics (I dunno if you’ve noticed, but all the Call of Dutys are just FPSs, and, until recently, they haven’t even attempted to change their setting), there are different stories and characters to discover.

People seem to forget about GTA’s increasingly deep storylines. Granted, it’s only been occurring for two iterations, as I wouldn’t consider GTA III’s story very deep, but the way San Andreas plays with emotion and character development takes the series to a whole new place, advancing it beyond the “sand box slaughter fest” and, for me, creating an almost action adventure experience.

Having just praised the series for its stories, I’d like to contradict myself and state that the storytelling of GTA IV is what disappointed me the most about the game by far. Their technique of focusing on the cell phone left a lot to be desired in plot and mission progression, where waiting for a phone call or getting called about something abruptly while heading toward another activity became tedious and annoying. Its “character development” (see friendship minigame) was trite and grated on my nerves. The storyline elements and quests that included character interaction were fine and developed the characters quite well; I don’t need them calling me later to go look at pixel tits. I don’t mind this for tertiary effects, like dating certain people to get minor bonuses, but I’ve bailed Little John out of so much shit, I shouldn’t have to keep taking him bowling to keep him my friend and to make sure that I have his portable weapon shop available to me. 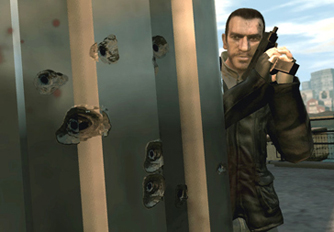 Another plot device (minor spoiler alert) that GTA incorporates is the “decisions” mechanic, which allows you to decide maybe…three (out of the BILLIONS that you slaughter) people’s fate in the whole game, and while this might sound like perhaps there are multiple endings and different story archs, there really isn’t. The last mission changes based on a final decision at the end of the game, but all in all the story remains relatively similar, and because of the annoying friendship simulator wearing on me early and making me not want to do it later during the story, the ending in general was rather disappointing, and I felt quite detached from the events because I wasn’t forced to interact with certain characters.

All in all, though, the storytelling remained interesting, and the characters, when they weren’t bugging me via cell phone, were quite fleshed out and made for a compelling single-player experience. After finishing the major plot points, there’s still a lot of activity that’s improved greatly from previous post-story encounters, a lot of which involved driving fast and shooting lots of baddies which, with new mechanics, has never been…funner? More fun! The gun-play mechanics are now solid, and hunting down enemies with rifles and shotguns is now fun, whereas, in previous GTAs, it’s been quite a chore. The driving takes a little getting used to, but, in the long run, it provides for a more entertaining and “realistic” experience when sliding around corners and spinning out in tense chases. These minor changes set in place a great system for the online play, co-op and versus, which boggles the mind, with so much space to run free while competing with multiple people. It’s no Battlefield, but it definitely adds replayability.

All of this, of course, is just the tip of the iceberg, complaints included, but I think that the major points are conveyed and that GTA IV is a solid game that is a step forward in the series and should be played by anyone who considers themselves a gamer. I’m not saying that it’s God’s gift to man (Halo, duh) but I think that, if you let yourself, you’ll enjoy.

Courtesy of our (literal) brother site Frothy Ruminations (run by my actual, real-life brother Dan), here's a compilation of every single one of Chris Klein's lines from last year's Street Fighter mov