Barkley, Shut Up and Jam: Gaiden, Chapter 1 of the Hoopz Barkley SaGa (BSU&J:G) by Tales of Game’s Studios is exactly what you’d think a retro-style RPG about Charles Barkley set in a dystopian future after the events of Space Jam would be: awesome. The year is 2053, and Barkley, who now lives in the ruins of Neo New York with his son Hoopz, has been deprived of his beloved basketball. Twelve years earlier he performed the ultimate b-ball jam, the Chaos Dunk, a slam so powerful it killed millions and caused b-ball to be outlawed and all b-ballers to be persecuted.  Now, Charles struggles to make a living in the Post-Cyberpocalypse while dodging terrorist attacks from the shadowy B.L.O.O.D.M.O.S.E.S. group and enduring constant hounding from Michael Jordan, now head of the government’s anti-basketball gestapo. 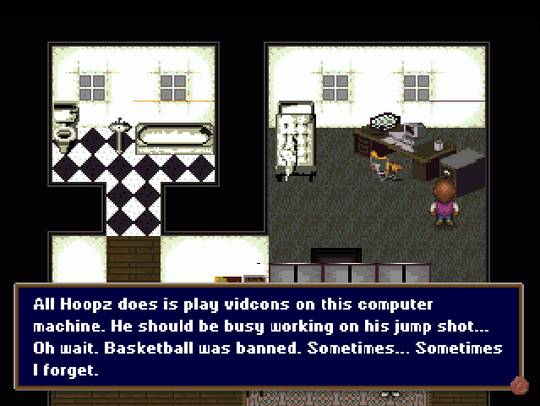 Did any part of the introduction not sound incredible and/or hilarious to you? If so, I’m going to assume you’ve come to GameCola by mistake, seeing as a sense of humor is sort of a prerequisite for enjoying what we do here. If, on the other hand, the opening paragraph piqued your interest, then you’re in for a treat.

BSU&J:G is a game that’s been lovingly crafted as an homage/parody to old-school RPGs, ’90s pop culture, and, of course, Space Jam. The title screen, a gloriously 32-bit rendering of Barkley and his compatriots, is presented along with a remix of the Space Jam theme, with quotes from the game flashing along the bottom (one of the phrases, “You don’t need a reason to help people,” is taken directly from the opening of Final Fantasy IX). Once the game starts, the player is treated to a voiceover from none other than Sir Charles himself, the angst and remorse in his voice palpable as he describes the changes he has wrought upon the world. After this, Charles’ life is quickly thrown into disarray, and the player finds himself fending off attacks from monsters mutated by negative b-ball energies as Charles journeys throughout Neo New York looking for answers.

If you grew up playing SNES RPGs, or have played any of the recent ports of old games like Final Fantasy or Chrono Trigger, this game should look and feel very familiar to you. In fact, many of the backgrounds are lifted from old SNES games, and, while they’re not original, they do give the game a very nostalgic quality while capitalizing on some of the best graphics from videogame history. The music is similar in style, consisting of well-done 32-bit chiptune pieces. Unlike the graphics, the music seems fairly original (I didn’t recognize any of the themes, at least), though there are a few songs that are obviously from additional sources, but I don’t want to spoil the surprise by saying where.

Charles and his party explore the world and dungeons in a top-down format, and he can interact with other characters, open chests, or enter areas by encountering enemy sprites (just like in EarthBound). Combat is turn-based, and the game employs a system similar to Paper Mario or the Mario & Luigi games, where the player is responsible for hitting a certain combination of buttons and/or executing proper timing in order to successfully pull off attacks. Admittedly, some of the attacks can be tricky to pull off effectively, though the game does provide a brief description of the benefits and drawbacks of each attack on the battle screen to help players execute them. You can equip characters with all manner of sports-related paraphernalia (such as basketballs, jerseys, and Nikes) to aid them in battle, while potions and elixirs are replaced by Ecto-Cooler (if you do not know what this is, congratulations on making me feel old) and Chicken Fries (yum!). 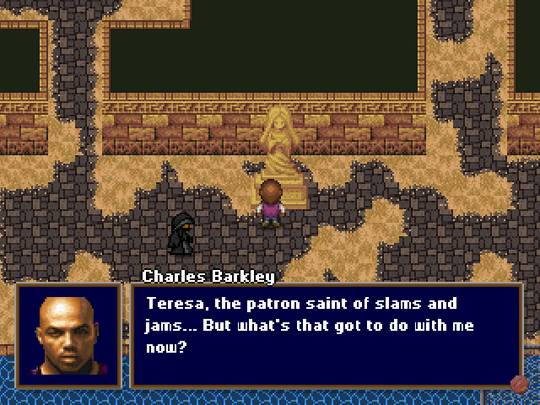 By far, the main selling point of this game is its story, cast of characters, and use of them to both lampoon the RPG genre and celebrate it. The protagonist’s angst and anger toward the outside world is a typical trait of many RPG heroes these days, yet the fact that it’s all coming from Charles Barkley highlights how ridiculous it all is. Normal items are given outlandish, silly-sounding names: magic swords and their accompanying skill sets are referred to as “zaubers,” while Fenix Downs have been replaced by steroids, leaving one to wonder just what exactly has been in all those vivifying fantasy world items all these years. Random organizations and big ideas are presented interchangeably as words or acronyms that are never fully explained, i.e. B.L.O.O.D.M.O.S.E.S. or F.A.T.E., a practice reminiscent of many Square Enix RPGs. (“Sin” as a bad guy in FFX? That’s not a ham-fisted allusion AT ALL.) To top it all off,  in order to save progress the player is forced to utilize a sentient gas pump, which takes the opportunity to extol the virtues of Japanese culture while denouncing “gaijin” Western culture. Honestly, I’m not sure whether the script was original or pulled off of a random JRPG fan-site.

Clocking in at around 10-12 hours and available for free at the Tales of Game’s website (currently down), Barkley, Shut Up and Jam: Gaiden is definitely worth checking out if you’re a fan of comedy, Space Jam, RPGs or any combination of the above. Like some of the best comedic media, it seamlessly blends parody with excellent content, delivering a game that is not only hilarious but fun to play. Hopefully there’s more to come from the series, as this is supposed to be only the first chapter of the story, though, with the mocking tone of the game it’s hard to tell whether the game’s creators are serious when they describe it as such. Either way there’s no reason to wait—so come on and slam, and welcome to the jam.