At E3 2011, Zelda fans were finally able to see demos for Legend of Zelda: Skyward Sword. It’s great to see that this game actually exists, and the demos were quite popular, but everyone is still disappointed at the vague release date.

To put things in perspective, let’s rewind to the previous Zelda game, Twilight Princess. They had various demos for that game, at E3 2005 and E3 2006. These demos included…

The demos were great, although some of them were blatant excuses to show off the Wii’s motion technology. I’m looking at you, bow and arrow. You have no business being the special item in the second dungeon, when they clearly intended the Iron Boots to be the special item.

In the actual game itself, the material from the demos was pretty much isolated. You only do the goat herding challenge once in the game, twice if you want a heart piece. You only do hawk guiding once, twice if you’re observant enough to find the second piece of hawk grass on Death Mountain Trail. The special weapon of the first dungeon gets used twice, and horseback battling occurs three times.

So really, the things that were shown off in the Twilight Princess demos were basically made just for the sake of having good demos. They did not really come into play during the actual game itself. Personally, I’m a little disappointed that the cool hawk guiding demo didn’t get used in the game itself, whereas I’m glad they didn’t have more goat herding challenges, because that was kind of bothersome.

There were three Skyward Sword demos at the recent E3. They all were in HD and ran off of the Wii U system. The idea was to show off the Wii U’s HD capabilities. The actual Zelda game itself will not be in HD, or run off of the Wii U. So again, the demos appear to be made just for the purposes of having a cool demo, as opposed to being integral to the game. People have gone crazy over the HD graphics, so let’s take a look at them in action:

Personally, I’m not sure we need HD graphics, because the game is done in Toon Link style. Do we really need HD Toon Link? I can’t tell the difference between HD cartoons and non-HD cartoons. Just saying. Really, if I had to complain about the graphics, I’d say that they make me slightly worried that this game will be an “adult” version of the Toon Link series, as opposed to an entry in the “mature” Zelda series. I’ll reserve judgment on that score for now.

Demo #1 was a bird-flying minigame. It’s basically the same as horseback racing in the other Zelda games, where you press A to make your animal spring forward, and you have to wait for your meter to refill before you can do it again. Do you remember the bird-flying challenge in Twilight Princess? It’s basically the exact same thing, except now you have people that you are racing.

The bird flying looked kind of boring, actually, compared to the near-identical bird races in Super Mario Galaxy 2. In Mario’s game, you had all sorts of walls and obstructions to dodge, which made it a challenge. In the Zelda demo, it was pretty much all just open skies and clouds, with an occasional floating island in your way. Maybe in the actual game itself, it will be a more difficult challenge.

Demo #2 was Forest Dungeon, which I’m guessing is Dungeon #1. Why is the forest dungeon always first, it seems? That was the case in Ocarina of Time, Majora’s Mask and Twilight Princess. Most of the dungeon involved using the flying beetle item. Just like the birds from the first demo, you use the Wii-mote to control the flight path of the beetle. Hit a wall, and you have to start over.

The person playing the demo I watched was really bad, and he kept smashing into walls. The beetle seemed like an interesting item, but I only saw it used for one purpose: hitting switches that are high up in the air. Let’s hope it has more functionality in the actual game, or else I’m just going to use the bow and arrow instead.

Demo #3 was the boss battle. This was a tech demo, basically. It’s supposed to show off how good the controls are, and how you have to be very precise with your movements. The idea is that you use your Wii-mote as an actual sword, but to be honest, it looked somewhat counter-intuitive. At this point, everyone is so used to “waggle the Wii-mote to get a reaction” that “waggle the Wii-mote in very precise directions” seemed unnecessarily challenging.

Also, it looks like you absolutely have to stand up to use these controls. I have not played a Wii game while standing up in years. I play the games while sitting down, because my TV is at eye level with my couch. I would not like to have to play the game standing up, if this is at all possible.

Without having used these precise sword controls, I can’t tell you if they’re good or not. It looks like they could be a pain, and it looks like they could add a level of realism to the game. I am reminded of the sword fighting challenge in Wii Sports Resort, where the controls were super-precise and complicated, but really, the way you won the challenge was by randomly waving your arm all over the place. So really, it could go either way at this point. 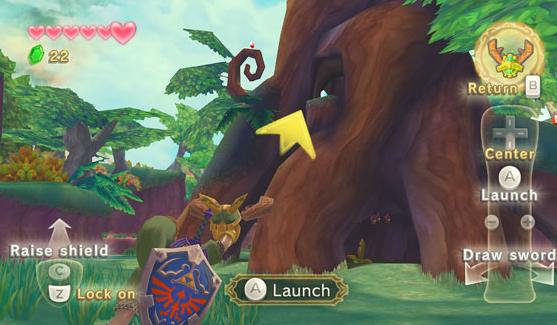 All in all, Skyward Sword looks like a decent enough game so far. The controls seem to work perfectly fine for everything, except maybe the sword fighting, where too much precision seems like too much hassle. The graphics look good, even if I’m still not sold on the Toon Link graphical style. But all complaints aside, we know for certain that Link has a flying thing that follows him around and tells him what to do. That means it’s sure to be another exciting Zelda adventure.

Why do developers continue including ice levels?