I’ve long been a fan of the Wonderland universe, having fallen in love with Lewis Carroll’s books as a child. I enjoy it for many of the same reasons other people do: the colorful yet enigmatic characters and world, the poetry of the language, and the vivid dreaminess of it all. It therefore seemed quite natural when I picked up American McGee’s Alice back in college, a couple of years after it had come out. It was fun, although not as great as I had hoped. While the setting was fantastic and I enjoyed the new take on Wonderland, I found many of the mechanics (particularly the jumping and camera angles) to be really clunky and frustrating. Therefore, when I recently started playing Alice: Madness Returns, I was hoping for a more polished game that would fix the problems of the original while expanding the world in new and interesting ways. Unfortunately, I found myself once more disappointed in the end result.

Madness Returns, by EA and Spicy Horse, maintains the same whimsical yet creepy style of the first game, blending vivid landscapes full of childlike imagination with grotesque and macabre elements that speak to the darkness threatening Alice’s mind and life. Alice, now a year out of the sanitarium from the first game, finds herself working in an orphanage in Victorian London and undergoing therapy to help cure her of what remains of her madness. While out on an errand, Alice starts seeing herself in Wonderland again, and soon finds herself going back and forth between there and Victorian London as her mind fights for her sanity once more, albeit this time against the fiery Infernal Train that threatens to consume all of Wonderland.

The sequel maintains the third-person platforming and action elements of the first game while giving Alice a slightly expanded repertoire of moves that she can use to explore Wonderland. The mechanics and gameplay are slightly improved over the original, and the third-person action controls are tighter, but they are not perfect. Jumping is better, but you should still be prepared for frequent and frustrating jumping puzzles. Combat is pretty good, with the running, dodging, and bashing capabilities of most third-person action game protagonists, and Alice’s arsenal can be upgraded by spending teeth collected from enemies and the environment. Alice can also shrink and grow at will, allowing her to find hidden passages and extra items. Additionally, there are a few places where different gameplay modes are explored, such as a 2D platforming section that takes place on an oriental wall scroll, and a Giant Alice mode that allows players to mow down legions of enemies at once. These are great ways to break up the action of the game and keep things fresh, and honestly I wish I could have seen more of them. 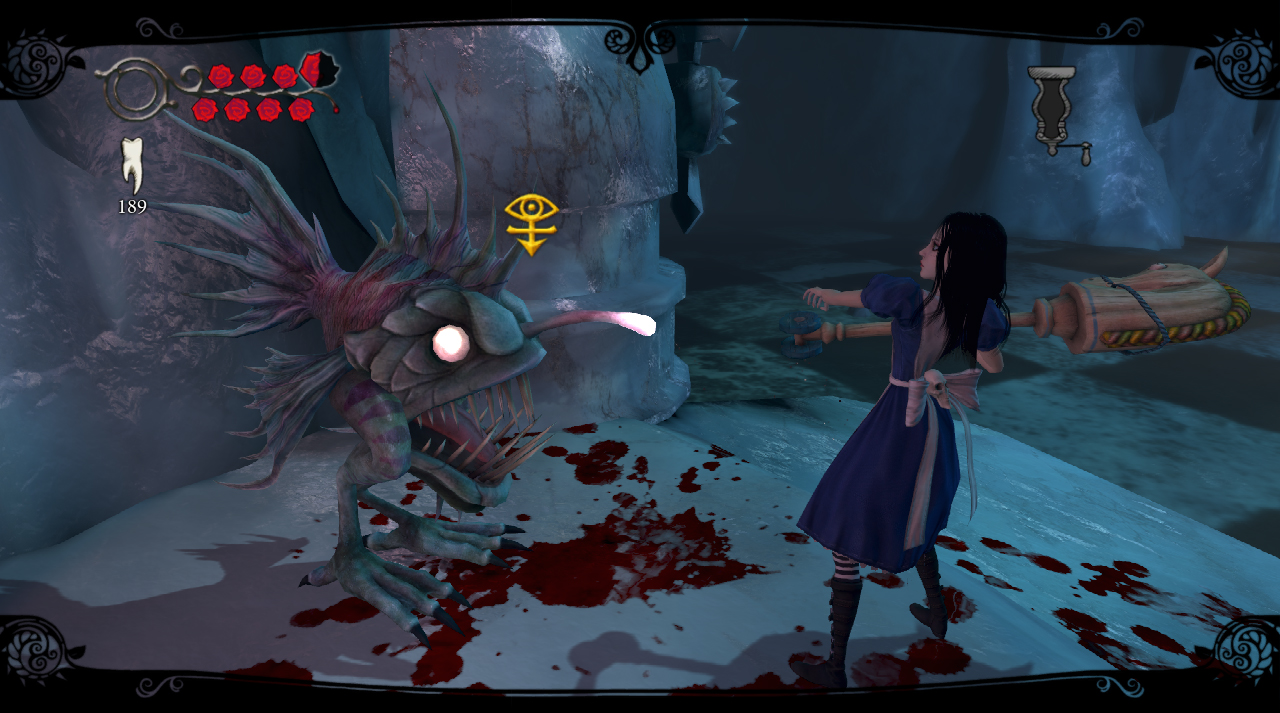 Collectables have been added to Madness Returns in another improvement over the original. Pieces of Alice’s memory can be collected while in Wonderland, each providing a bit of speech from a real-world character about the circumstances surrounding Alice’s life. Additionally, Alice can discover “Radula Rooms” that present challenges for her to overcome in the form of battle arenas or quizzes. Besting these challenges allows Alice to collect items to increase her health. While the extra incentive for exploration is nice, I found these areas to be somewhat disruptive, as they don’t really fit well into the narrative, instead highlighting the fact that this is simply a game set in the Wonderland universe rather an experience tailored to the potential of Carroll’s works. Lastly, a New Game Plus feature has been added to allow players to replay the game with their upgrades and collectibles intact, for those who wish to relive the experience, finish their collections, or try new strategies.

As I alluded to previously, the visuals and music are up to par in Madness Returns and match the settings of the game well. Some of the level design is questionable, however, as many areas have little to no basis in any of Carroll’s works and can stretch on for too long, becoming boring and repetitive. Also, and I know this sounds odd considering we’re talking about Wonderland, but some of the environments just struck me as…weird. For instance, one level, which features a shrunken Alice on a miniature jade mountain fighting samurai wasps in order to reach Caterpillar, just left me wondering “What the hell does THIS have to do with Wonderland?” It was an intriguing idea—one of many, to be honest—but I don’t think enough was done to really tie it to the source material.

That’s far from the only thing to fall short or feel out of place in this game. In what struck me as a bit of a bad omen early on, one of the first things players encounter in Wonderland is the skeleton of the Jabberwock, picked clean and bleaching in the sun. Here lies the biggest, baddest monster in Wonderland, already defeated; and in fact the game lacks replacements for nearly all of the great Wonderland figures battled in the last game. The only unique boss is the final one: every other “boss” is just a new and/or improved type of generic enemy. The Wonderland characters encountered in the game only tend to serve as background for the conflict of Alice vs. the Train; and while the Train (and the force behind it) represents a truly creepy and evil villain, the fact that the existing cast of Wonderland is under-utilized is disheartening and rather perplexing, especially considering the richness of the material. By contrast, the Victorian London sequences in the game were far more interesting and original, as they represented a departure from the typical Wonderland setting and showed some of the fascinating (and frightening) new aspects of Alice’s life. Unfortunately, these sequences were usually brief and only served to set up the next level of the game. 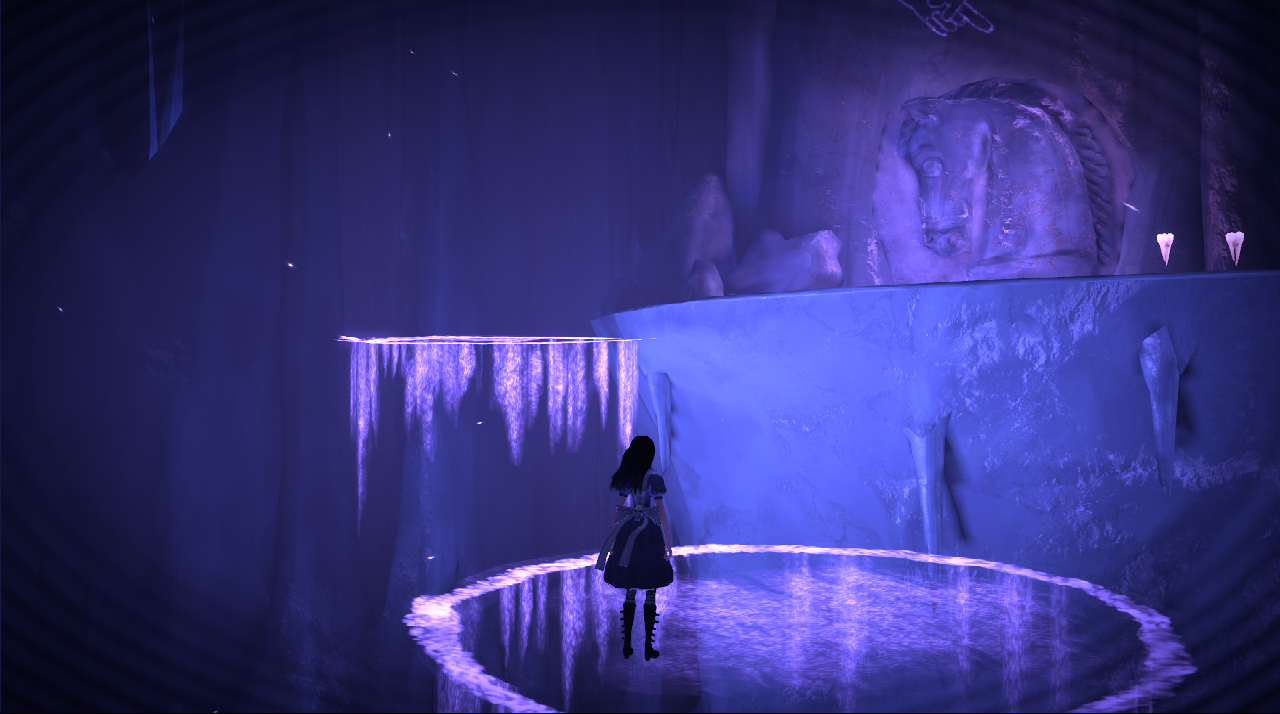 All right, I’ve got a rant to get out, so feel free to skip ahead to the score if you’ve already got what you need. Despite what I said about loving Wonderland, I’ve discovered that I hate a lot of the modern retellings of Lewis Carroll’s work. Why? Because people see that it’s wacky and weird and they think “Ooo, look at how odd it is! I can do my own interesting stuff with this!” And the reality of the situation is no, you can’t. Wonderland is already extremely twisted and weird, so trying to make it weirder doesn’t work unless you’re on the same crazy level as Lewis Carroll, and if you are, why the hell aren’t you making something original anyway?! American McGee’s Alice worked because we had never seen a Wonderland game on that scale before and the macabre elements were relatively new. Now, however, we’ve seen it, it’s been done before, and the potentially interesting new elements regarding Alice’s life as a street urchin are overshadowed by pathetic attempts to wring out all that’s possible from someone else’s work. American McGee, Tim Burton, and others, PLEASE, either find something novel to do with Wonderland OR JUST LEAVE IT THE HELL ALONE.

Whew, sorry about that. That rant’s been building for a while.

Anyway, to sum up (and I know I say this about a lot of games these days), Alice: Madness Returns isn’t a bad game, just a disappointing one, which in a way is almost worse. With a bad game, you can laugh about it or get mad (usually depending on how much you paid for it), and after a while you can at least poke fun at it. Disappointing games, on the other hand, while still holding the possibility of enjoyment, give you a glimpse of what a game could be but then proceed to fall short of expectations. Madness Returns does a lot of interesting things, and if it hadn’t tied itself to such a beloved property and had used original characters, this might be a very different review. But having set the bar high and falling short, it might be better for players just to go back and play the first game, or better yet, go back even further and just read the original books.

Over the years a lot of games have scared me; I won't lie. I screamed while playing Resident Evil. I never finished Silent Hill and refuse to attempt its sequels. I about wet myself trying to play Fat