Ever open up a drawer full of videogames looking for something to play, and you just can’t find it? Then, way in the back, you happen to notice the exact game that made your childhood great? This is that game for me. It’s one of the first videogames I ever played, and seeing it again just made me pop that sucker into my hard drive and relive those memories. 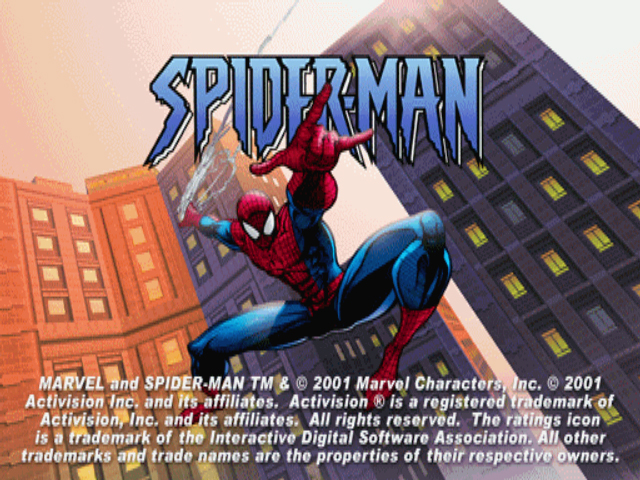 The story of Spider-Man is that Doctor Octopus has given up his life of crime to become a scientist again. Now, wait a minute. How the heck did that happen?! If someone becomes a major supervillian, and then suddenly promises that he’s not evil anymore, wouldn’t you just lock him up in a mental hospital and be done with him? Oh well. At a press conference Dr. O reveals his latest device (though without telling us what it does—suspicious!). Then all of a sudden there’s a struggle backstage, the guards are out cold, Dr. O mysteriously disappears and the perp is none other than… 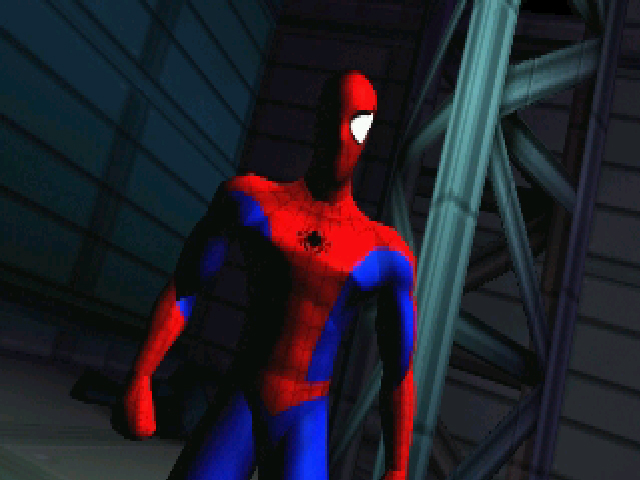 Spider-Man steals the device and then disappears. Now, this is obviously a fake Spider-Man, since Peter Parker himself is in the audience. Peter leaves and climbs to the top of the building, where the game starts. Your goal, then, is to find the fake Spider-Man, and beat the crap out of him. But Spidey gets sidetracked a lot when the bank is being robbed, Mary Jane gets kidnapped by Venom, J. Jonah Jameson gets attacked by the Scorpion, and a lot of other fun stuff happens. Spidey’s having a bad day.

Spider-Man’s gameplay is simple and genius. You can jump, attack (punches and kicks), web-swing, web-zip, and web-attack, (wow, lots of webs). You can also perform combos with all of these, which is kind of impressive for a game of its time. One of the problems I have with this game is the web system. If you use your webs for anything in this game, the web fluid amount goes down. As the game involves a lot of swinging, zipping, and long-range puzzles, if you run out of webs, you’re screwed. Sure, there are web cartridges you can pick up, and you can carry up to 10 of them, but the next thing you know you’re down to one. I get the fact that they were trying to make it realistic, but I mean COME ON! There is also a targeting mode good for web-shooting puzzles and web-zipping, which is a nice feature.

This game comes with four difficulties: Easy, Medium, Hard, and…Kid Mode?! What’s Kid Mode? I tried it once, and all it does is make the enemies harder to beat and make it harder to swing. OK, now set that aside. If you can beat this game on Hard Mode without dying once, I swear to god you deserve a medal. Because the enemies are 12 times harder to beat, you take twice as much damage as usual, and you start off with only two web cartridges! Damn! 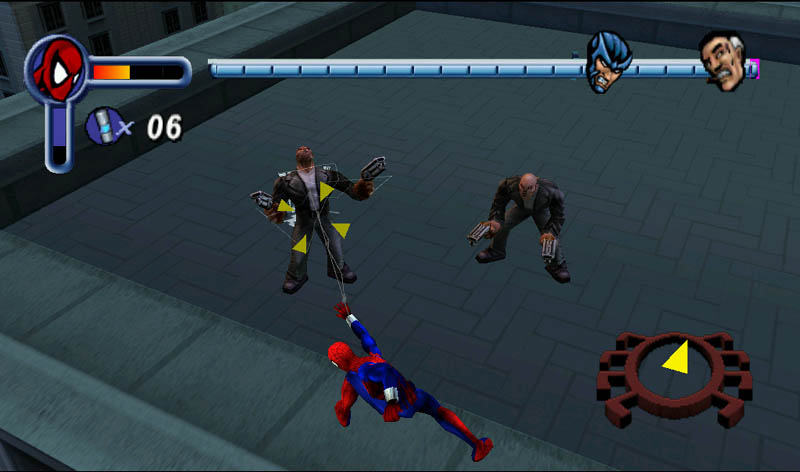 Spider-Man offers a total of eight bosses (one you have to fight twice) and over 20 levels! There are also a lot of unlockable suits that give you different abilities (one of them being unlimited webbing!). There’s a training mode where you can test your combat skills, web shooting, speed, timing, and most of all, awesome ways to die! Why? Because it’s very hard! You can also enter cheat codes if you get stuck, or want to get the other costumes early, or if you’re lazy like me, UNLOCK EVERYTHING!

Another thing I like about this game is that there are a lot of pop-culture references. Not only are there references to other Marvel superheroes like Captain America, The Sub-Mariner, etc., but there are also random movie references, like Scorpion coming through a wall and saying “Here’s Johnny!” There is even an ad for Tony Hawk Pro Skater 2, which is especially cool because Spidey’s a playable character in it.

That said—I’m not sure if it’s the game itself or just my copy (cause it’s a bit scratched up), but there are a lot of glitches in this game. Not small glitches like not being able to crawl up a certain wall, or Spidey running around in circles during an in-game cutscene. I’m talking about MAJOR glitches, like Spidey jumping off the building during the intro, or going through a chase sequence and then randomly falling to his death! The only way to avoid these glitches is to use the level select code.

Despite all the glitches, this game is awesome! The story is great, gameplay is great, graphics are great, it’s so challenging it’s satisfying, and for me personally, it brings back a lot of childhood memories! This is the best Spider-Man game…no, the best superhero game ever made (sorry, Batman: Arkam Asylum), and it deserves more attention.

My final verdict: A HELL OF A LOT BETTER THAN SUPERMAN 64!